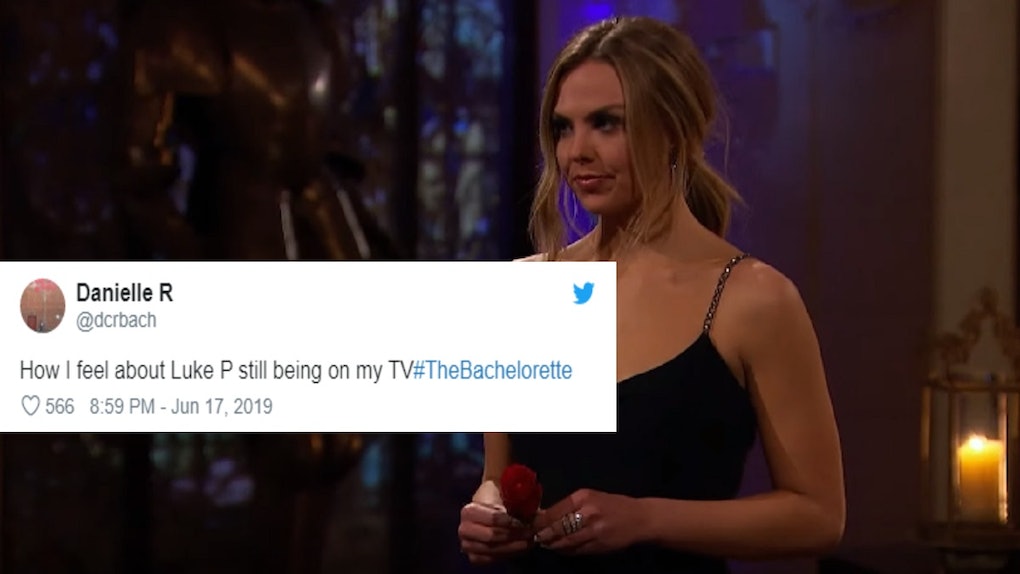 Hannah Brown's season of The Bachelorette has truly embraced the cliffhangers so far, drawing out the battle of Luke P. and Luke S over two episodes. This week followed suit as the show released the follow-up of Luke P.'s one-on-one date with Hannah and how she refused to give him a rose during their private time. However, Hannah chose to decide Luke's fate at the rose ceremony, and she saved a big bombshell for the elimination stage in Scotland. These tweets about Hannah's rose ceremonies on The Bachelorette prove that fans are over any and all drama involving Luke P., but it doesn't look like it's ending anytime soon.

ICYMI, Luke P. has always been a controversial contestant for acting so direct and aggressive in his pursuit of Hannah. Most recently, his urge to feel dominant in the competition rose when he allegedly attacked Luke S. during a rugby game in Newport. Luke P. stuck to the excuse that he thought the other Luke was going to attack him, but Luke S. and the rest of the men fought back this explanation and said that his actions were unprovoked.

Luke P.'s inability to listen to the men's concerns and Hannah's reluctance to trust others led to Luke S. eliminating himself that week. Still feeling out of the loop about Luke P.'s truth, Hannah brought him on a one-on-one date in Scotland to voice her issues with him. Her demands for Luke to open up were unsuccessful, and Luke essentially just repeated the reassurances he thought a Bachelorette would like to hear.

Disappointed with Luke's performance, Hannah wouldn't give up the date rose, telling him, "Sometimes I look at you and I don't think there are any roads that lead to what I want." June 11's episode ended with her announcing she couldn't give Luke a rose, but on Twitter, Bachelor Nation was already expecting a big twist regarding Luke.

Following Hannah's choice, Luke took full ownership for his actions, asking her to remember their past conversations and to move on from the drama. Hannah wasn't budging and sent a confused Luke P. on his way. But that wasn't quite the end for him.

"I care about her so much, I don't want to go home," he told cameras. "Nothing's going to clutter my mind except pursuing Hannah...that's what I want, genuinely, for the rest of my life."

Luke returned to Hannah, apologizing again and practically begging her for a second chance. "I genuinely want to marry you," he said. "I could care less about anything. Nothing matters to me now except you."

No surprise, but that was a lot to take for Hannah. She decided to leave Luke waiting for her final decision until the rose ceremony, which didn't please the other men. Fans on Twitter weren't happy with the choice either, and the Luke drama later escalated when Garrett confronted him about mentioning other men during his one-on-one date.

Garrett picking a fight with Luke prompted Hannah to intervene and tearfully ask for the men to "stay in their own lane," but even after her request, the men kept prodding at each other. Hannah stepped in again, telling the group, "I can decide if I want to spend my time figuring this out or if I don't...please stop pointing fingers at other people and allow me to do that and focus on yourself."

Hannah broke down toward the end of her speech, feeling emotionally depleted by the drama and frustrated that her relationships weren't advancing. At the rose ceremony, she then awarded the very last rose to Luke, setting Twitter aflame.

Welp, it looks like Bachelor Nation will be creating plenty of more Luke P. tweets in the next week. Here's to you, Hannah —if fans are over this drama, just imagine how she must be feeling in the middle of this mess.