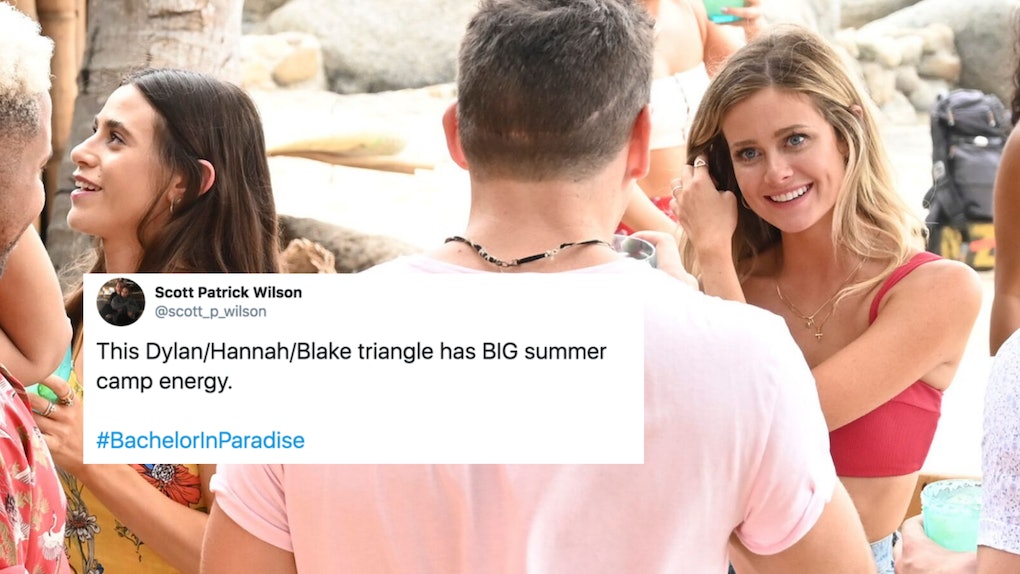 These Tweets About Hannah G.'s Love Triangle On 'Bachelor In Paradise' Are A Lot

As Week 2 of Bachelor in Paradise came to an end, the reality dating show has still been largely dominated by the same drama Season 6 kicked off with. On Tuesday night's new episode, the love triangle between Hannah Godwin, Blake Horstmann, and Dylan Barbour got even stickier by a major revelation, and fans were quick to react online. These tweets about Hannah G.'s love triangle on Bachelor in Paradise show everyone is just as shook as the show's contestants.

So far, the sixth season of Bachelor in Paradise has basically been the Hannah and Blake show. Blake became an immediate source of controversy before even walking onto the beach, thanks to his pre-show hookups with Kristina and Caelynn. When his date choice, Tayshia, learned about his bed-hopping ways, she also pushed him to the side, but that did not stop Blake from pursuing a love connection. Blake's object of pursuit quickly became Hannah, and the reason for that finally came to light in the latest episode.

Hannah has also been the source of major drama in the game. Although she developed what seems to be an awesome connection with Dylan, Hannah shocked viewers as well as her fellow contestants by kissing Blake when he pursued her. The action brought the underlying tension of the Hannah-Blake-Dylan love triangle to a head, and on the Aug. 13 episode, Hannah dropped a bomb about her past with Blake on Dylan.

In the new episode, Dylan confronted Hannah, asking her why she was still giving Blake the time of day when everyone else in the house was wise to his playboy ways. It turned out, Hannah and Blake actually had a connection prior to coming to the show. Hannah told Dylan that Blake actually flew down to Hannah's hometown of Birmingham, Alabama, very soon before coming to Paradise to have a long talk with her that ended in a kiss.

The revelation clearly hurt Dylan, and got on the nerves of the rest of the contestants. Blake later revealed that his trip to Alabama took place just one week ahead of Paradise, and Tayshia in particular was upset at Hannah for keeping her pre-show tryst with Blake a secret. Tayshia asked Hannah why she did not come clean about her dalliance with Blake, but Hannah seemed to think Tayshia was attacking her and she ended the conversation. So instead of resolving things, the Hannah-Blake-Dylan love triangle kinda got even more and more complicated, and Twitter erupted in hilarious responses to the latest development. Check out the best tweets about Hannah's love triangle below:

Clearly, the Hannah and Blake show will be continuing into the foreseeable future on Bachelor in Paradise, so viewers will hopefully be getting a lot more information about what is really going on between these two. Oh, and of course, Bachelor Nation will continue to be on the edges of their seats to see if Hannah actually comes around to choose the new fan-favorite Dylan, or go with the franchise's new resident bad boy Blake. However it turns out, this is going to be juicy!