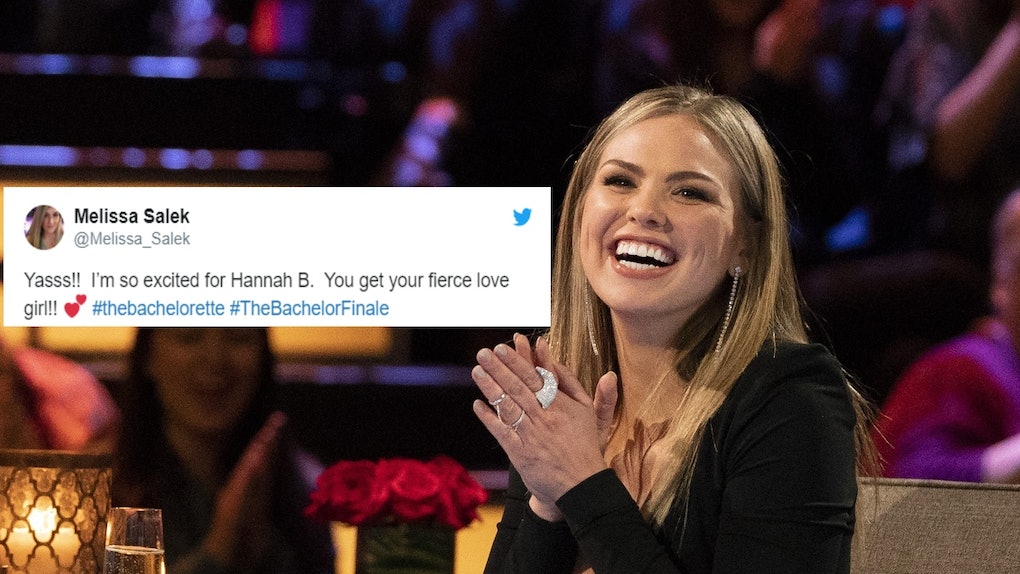 These Tweets About Hannah B. Being The Bachelorette Will Get You So Excited For Her

I may have an affinity for Hannah Montana, but for the next season of The Bachelorette, my renditions of "Nobody's Perfect" are dedicated to the new leading lady Hannah Brown, aka Alabama Hannah. The 24-year-old beauty queen was announced as the Season 15 Bachelorette on The Bachelor's "After the Final Rose" special. Ahead of her rolling up to Bachelor Mansion again, fans on Twitter are already debating her new role. Tweets about Hannah B. being the Bachelorette will make you even excited for her. Is it May yet?

When Bachelor Nation first met the former Miss Alabama at the start of Colton Underwood's Bachelor season, Hannah wasn't an obvious star yet. She froze upon realizing that her pageant rival Caelynn, who finished as runner-up at Miss USA, was also a contestant. Fans were also confused about her awkwardness when Colton asked her to deliver a toast on their first date.

Hannah managed to recover from that blunder and score a rose that day, but her frantic insecurity about Caelynn's growing popularity and Colton falling for the Miss North Carolina representative didn't paint her in the greatest light. But then again, who hasn't let insecurity get the best of them at some point in their lives?

Caelynn and Hannah eventually reconciled, providing one of the season's few women-supporting-women moments. Hannah thought her relationship with Colton was practically a done deal when he invited her to visit his family in Denver, but she was in for a major shock after the hometown meeting. Colton chose to send her home, but Hannah's exit won over fans when she said, "I will not allow myself to not feel chosen every single day. And I’ll wait till whenever that is."

Along with her super relatable toast at the "Women Tell All" special, Hannah B. seemed to secure a place in many fans' hearts. Before the Bachelor finale week even kicked off, tweets supporting her and her possible Bachelorette gig poured in.

Given this online support, it wasn't much of a surprise when Bachelor Nation exploded upon the official announcement of Hannah as the Bachelorette. Her supporters came through on Twitter to share their excitement.

Of course, you can never please everyone, and some fans just aren't into the idea of Hannah as the franchise's lead. Her goofy personality isn't for everyone, and the mystery of Hannah B.'s missing Bachelor scenes convinced some people that fans were deprived of major character-revealing footage.

The mixed reactions to ABC's casting choices are nothing new in Bachelor Nation, but I'm confident that Hannah B. will keep the fans entertained. Everyone's allowed a few nerves on their first solo outing on live TV, so even though she seemed a little awkward and quiet during "After the Final Rose," count me in as a fan with high hopes. Congrats, girl!

Season 15 of The Bachelorette, starring Hannah Brown, premieres on ABC on Monday, May 13.