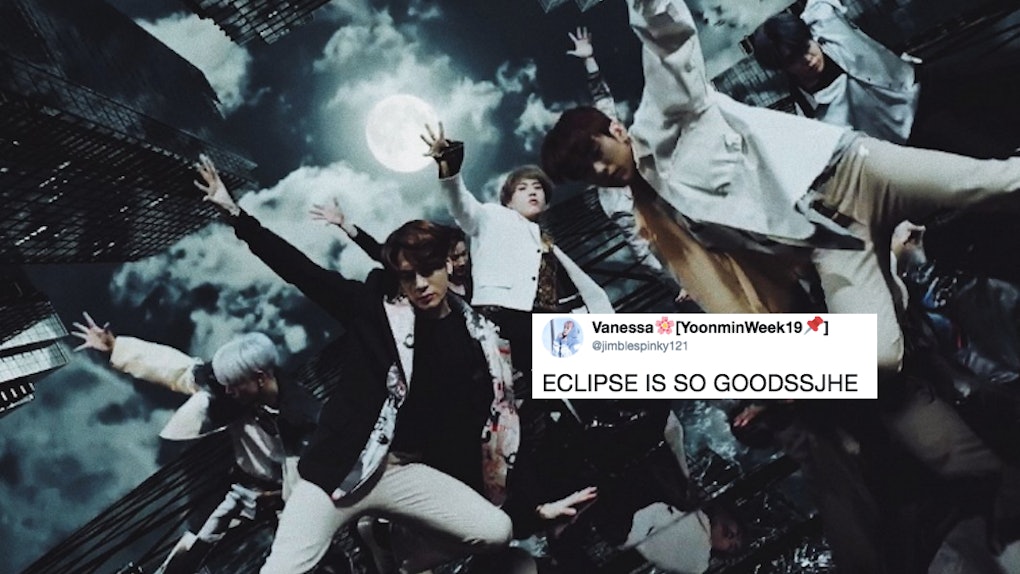 GOT7's comeback is officially in full swing, you guys! Not only did their new album drop on May 20, but Aghases got the new music video for "Eclipse," too! The track marks the group's first single from Spinning Top: Between Security & Insecurity. And it's pretty damn amazing. The sultry video features all seven members of the boy band — Mark, JB, Jackson, Jinyoung, Youngjae, BamBam, and Yugyeom — gazing at the camera and breaking out into their sick dance moves. It's just as sultry and sexy as it sounds. Not surprisingly, Twitter is melting down over this thing. Seriously, you have to see the tweets about GOT7's "Eclipse" music video, because fans are beyond supportive.

In case you didn't know, "Eclipse" appears on GOT7's just-released album Spinning Top: Between Security & Insecurity. The mini-album features six other singles, including "Time Out," "Page," and an instrumental version of "Eclipse." The group unveiled their tracklist on Monday, May 13. They also shared two short trailers for their music video on May 14 and 15, giving their fans a sneak peek of what was to come. And, no surprise, Ahgases have a lot to say about both of them!

Let's take a look at them, shall we?

And here's the second:

So intense, right? And now that the actual music video is here, would you believe that the tweets are even more passionate? Of course you would! This is GOT7 we're talking about, duh!

But before we get to the fan reaction over on Twitter, let's take a look at the official full-length "Eclipse" music video:

Damn. GOT7 did that. The full music video is just as sultry and sexy as the teasers were, to no one's surprise. In the video, the guys sing and dance on truly out of this world backdrops that honestly look kind of apocalyptic. Here for it.

The song's lyrics (you can check out an English translation of them here) definitely fall on the insecurity side of this Between Security & Insecurity theme. In the songs, the guys sing about wanting to be a good partner in a relationship, but being afraid that they'll mess it all up or that the "darkness," aka, their insecurities and anxieties, will come for them. But they'll continue to fight for their love before it's eclipsed. Deep.

Now, let's take a look at how fans reacted, because this thing is so major:

Yup, the Ahgases are in love. And they'll have a chance real soon to see their favorite guys sing "Eclipse" and the rest of the Spinning Top album, as they are heading off on tour in June!

GOT7 has a 2019 Keep Spinning world tour in the works, which will kick off on June 15 in Seoul. The group will later perform five shows in the U.S. in June and July — plus one in Canada and one in Mexico City.

Here is a list of GOT7's North American dates and venue information for Keep Spinning:

Tickets went on sale May 17, so head over to LiveNation if you want to try and grab some now.