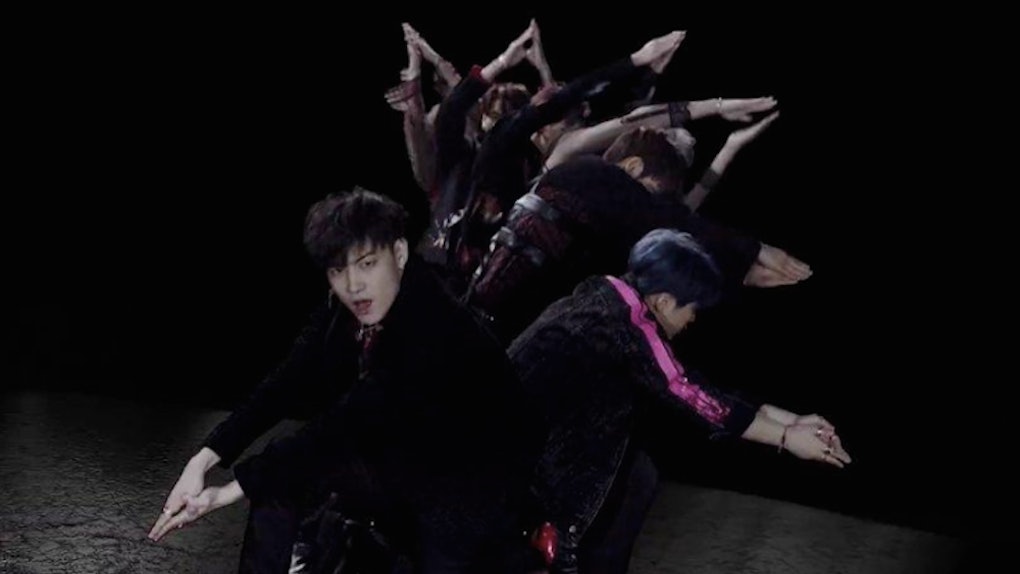 What Do GOT7's "Eclipse" Lyrics Mean? This Track Is Way More Than Just A Love Song

GOT7 is back, fam. They never really left, to be honest, but they're coming out with new music and videos, so we'll let them continue to call it a comeback. JYP Entertainment, released a comeback teaser trailer for their upcoming song "Eclipse" on May 14, getting GOT7 stans around the world pumped AF. The single has finally arrived, much to the delight of their fandom, so what do GOT7's "Eclipse lyrics mean? Let's unpack this new track from the K-Pop group.

The track will mark the group's first single from their new album, Spinning Top: Between Security and Insecurity. Their last album release was on Jan. 30, 2019 — their third Japanese album called I Won't Let You Go — so it might be a little shocking to learn that less than six months later, they're gearing up to release another album. But that's how K-Pop music cycles work, if ya haven't noticed. The genre is known for churning out quality music at an almost unfathomable rate, so those familiar with the industry shouldn't be surprised that new GOT7 album is already here.

"Eclipse" dropped on Monday, May 20, along with the whole Spinning Top album, and already GOT7 stans are in love. Fans knew the song was going to be filled with GOT7 amazingness when the teaser for the music video dropped on May 14.

I mean... just look at the smolder.

I can't look at it for too long! It's like the sun! JB, Jinyoung, Youngjae, BamBam, Mark, Jackson and Yugyeom, you're slaying me, here.

Fans were already gagged just from the teaser, actual song be damned!

Just kidding, they're totally in love with the song itself.

Let's unpack it now, shall we? (You can check out an English translation of the lyrics here.)

In the first verses, the boys take turns singing about love (duh), but specifically their fear that their insecurities will ~eclipse~ their love for their partner.

Then comes the chorus.

Can you even get over that chorus? It's just so damn catchy. And intense! The boys then go into the song's next verses.

I can't handle it, this weight on my shoulders / It scares me more as you become more precious / When I'm covered in the shadows / My mind becomes unstable / The anxiety gets worse, get away / You're believing in me alone / Us two, it's enough / We two are perfect / You and me, me and you / We're already one

I'm afraid that words I've said might disappear like smoke / And you, holding on to it, might also disappear/ What am I to you? / (I don't know) I need affirmations / (So I won't change) To me, you are my everything / (Trust me) I won't let you go until the end / Never let you go

Then the chorus comes back before the song goes into the amazingness that is the rap verse.

Just stay by my side / Even my wandering worries / They're all for you / You're surging like waves / Will I be able to carry you / Won't my insecurity / Make you leave me from my side / I might look silly now / But because of you, now, I am

The song closes out just as strong as it started with the chorus.

And there ya have it... a certified bop. And the "Eclipse" music video makes the song all the more epic.

This song definitely falls on the insecurity side of this whole Spinning Top: Between Security & Insecurity theme. It's a great lead single for the album, which also dropped on Monday, May 20. It's a short album, clocking in at only six tracks, but that's enough for the GOT7 fandom, lovingly called the Ahgases.

And lucky for the Ahgases, with a new K-Pop album also comes a new tour. GOT7 is set to go on tour starting in June 2019. The tour will have stops in the U.S., Mexico, Australia, Hong Kong, London and various other locations throughout Europe. The last tour dates will be in Manila in October. So get your headphones ready, GOT7 stans. You have a new album to study before emptying your wallets on tour tickets!

More like this
Demi Lovato & Ariana Grande's "Met Him Last Night" Lyrics Focus On Toxic Love
By Brandy Robidoux
What Do BTS' "Film Out" Lyrics Mean In English? They're About A Past Relationship
By Michele Mendez
Taylor Swift's 'Fearless (Taylor's Version)' Lyric Changes Are Small, But Meaningful
By Michele Mendez
Stay up to date