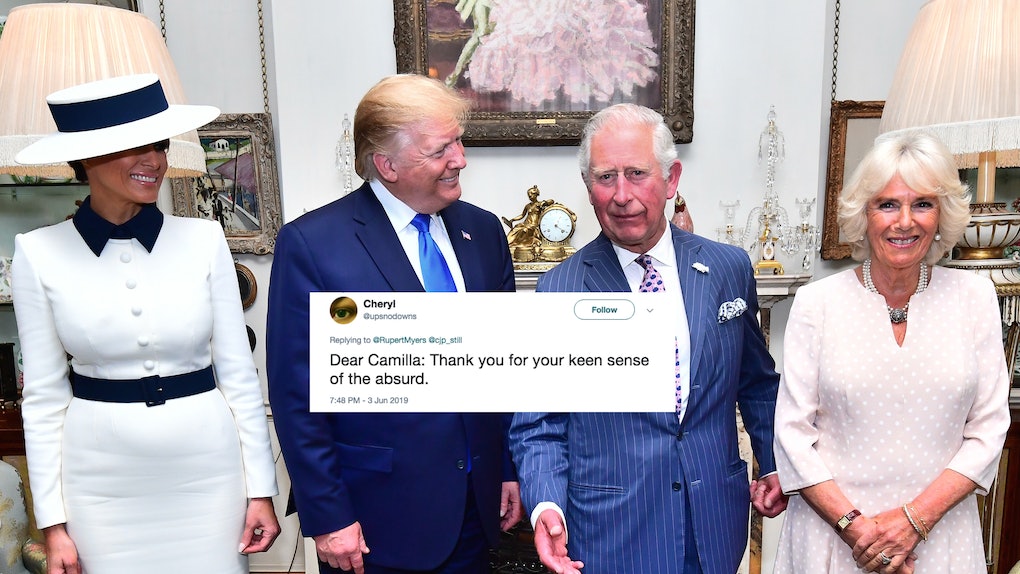 President Donald Trump kicked off his visit to the United Kingdom on June 3 by visiting the royal family at Buckingham Palace. A few notable royals were in attendance, and these tweets about Duchess Camilla winking during Trump's visit to the UK prove it was one of the most iconic moments of the trip. It looks like even royals can throw shade.

On Monday, June 3, Trump arrived at Buckingham Palace in London and was greeted by Queen Elizabeth. Duchess Camilla of Cornwall and her husband, Prince Charles of Wales, also decided to attend the welcoming ceremony. While the meeting seemed civil enough, there was one moment that caught almost everyone's attention. After speaking briefly, the group started leaving the room, and Duchess Camilla proceeded to deliver a sly wink at someone in the room before walking away.

It's unclear at exactly what the meaning behind the wink was. It could have just been an innocent gesture, or perhaps a slight act of shade towards President Trump. One thing is for sure, though. As soon as Twitter caught wind of the wink, they were all over it — speculating exactly what it could imply.

At first, some people on Twitter just saw it as a comedic gesture.

While some people on Twitter might have thought it was just fun and games, others had a few darker (but still hilarious) ideas of what the wink might have meant.

No matter what Duchess Camilla meant by the gesture, it certainly did win over the internet. After that moment, it looks like all of Twitter became #TeamCamilla.

Despite the humor that came from Trump's visit at Buckingham Palace, the rest of his visit was nothing but business. On Tuesday, June 4, Trump met with United Kingdom Prime Minister Theresa May to discuss matters including climate change and Chinese technology. Of course, Trump's meeting with May comes at a controversial time, seeing as the prime minister announced that she would officially be resigning effective Friday, June 7.

Regardless of her impending resignation, it sounds like May and President Trump's meeting was successful. In fact, it was such a hit that Trump told May to "stick around," so they can proceed with trade deals being negotiated. However, he did also note that he wasn't sure what May's "timing" currently is at the moment. "I don’t exactly know what your timing is, but stick around. Let’s do this deal," Trump said to May.

May has been hit with some major heat recently after the June 2016 Brexit vote, which ended in favor of the UK leaving the European Union (EU) 51.9% to 48.1%, according to BBC. Since the decision was made, the deadline for the UK to leave the EU has been continuously extended, with the new deadline being Oct. 31, according to Vox. Both the EU and the UK have failed to reach deals on the UK's departure, and the decision has resulted in serious controversy among UK residents.

When it comes to politics, it's usually best to take it seriously. However, thankfully, there's people like Duchess Camilla to lighten the mood — even with the most simple of gestures.