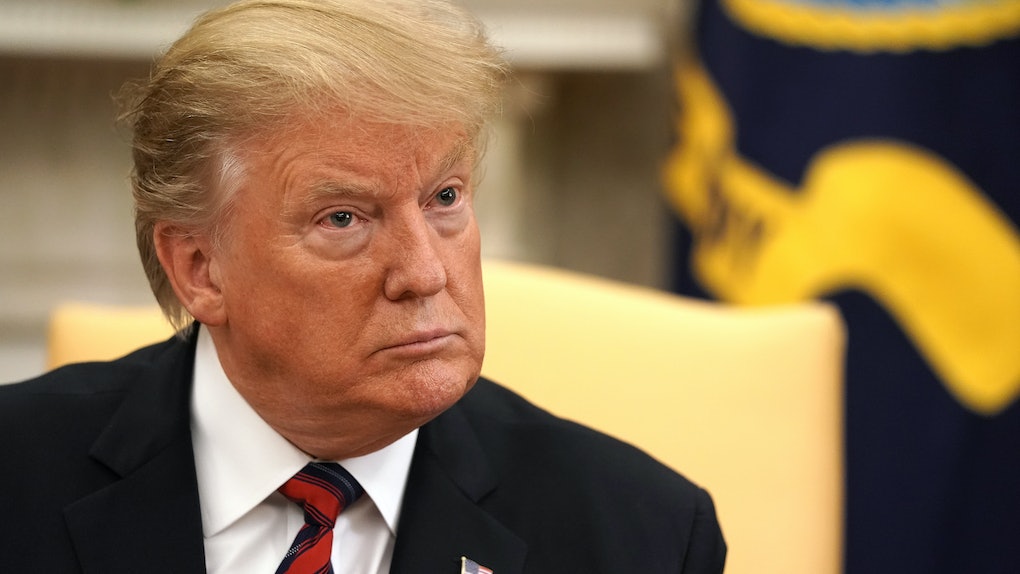 The world has finally gotten a look at some of President Donald Trump's tax information and it's... interesting, to say the least. The documents show that Trump, a man that has long touted his business acumen and success, has had some major losses over the years — to the tune of about $1 billion worth in just a 10-year span. The revelation has lots of people talking, and the tweets about Donald Trump's tax returns are seriously going in on him.

This all stems from a May 7 report from The New York Times that unveiled Trump's tax documents from 1985 to 1994. The report says that Trump lost a whopping $46.1 million in 1985 and that he continued to lose money in the years that followed, adding up to $1.17 billion for the decade. “Year after year, Mr. Trump appears to have lost more money than nearly any other individual American taxpayer,” the outlet said. Trump apparently didn't even have to pay income tax for eight out of 10 years because he had lost so much money. While the paper did not obtain Trump's actual tax returns, it said it got the information contained in them from a source "who had legal access to it." The data was then compared to an Internal Revenue Service (IRS) database. In a series of tweets on May 8, the president called the report "highly inaccurate" and said it was "very old" information. The Trump Organization did not immediately respond to Elite Daily's request for additional comment.

Can we just take a sec and talk about how wild this is, considering all of Trump's braggadocious comments about himself around that time? As the Times points out, Trump told Newsweek in 1987, “There is no one my age who has accomplished more." He even wrote his business-advice book The Art of the Deal in that period.

Twitter users can't wrap their minds around it and quickly came up with a nickname for the former Apprentice host that referenced a totally different reality show: The Biggest Loser.

Actress Mia Farrow was one of them, tweeting the nickname in all caps.

"Turns out, Trump was better suited for The Biggest Loser than his own reality TV show-to the tune of more than a billion dollars," MSNBC contributor Joyce Vance added.

"Donald Trump May Be One of the Biggest Losers in America," Jon Cooper, the chairman of The Democratic Coalition, wrote.

Other Twitter users weighed in with comments that are just as heated.

One person called Trump a "failure and a fraud."

Someone else called him a "fake billionaire" and a "fake president."

Wow, those are tough.

Meanwhile, Trump has been defending himself. In a tweet shared in the morning of May 8, he tweeted, “You always wanted to show losses for tax purposes .... almost all real estate developers did – and often re-negotiate with banks, it was sport." He went on to say that the information is a "highly inaccurate Fake News hit job!"

It's unclear how he's done financially in recent years, as Trump has long refused to release his tax returns. But Democrats have been working to get their hands on them, so hopefully something will happen soon.

And hopefully they don't look anything like these reported tax documents from the '80s.

More like this
These Tweets & Memes About Matt Gaetz's Venmo All Make The Same Joke
By Cianna Garrison
The More Contagious B-117 COVID Variant Is Now The Most Common Strain In The U.S.
By Rhyma Castillo
Here's How To Enter Hotels.com's Tax Write-Off Vacation Giveaway For A Chance At $2,700
By Lara Walsh
Stay up to date