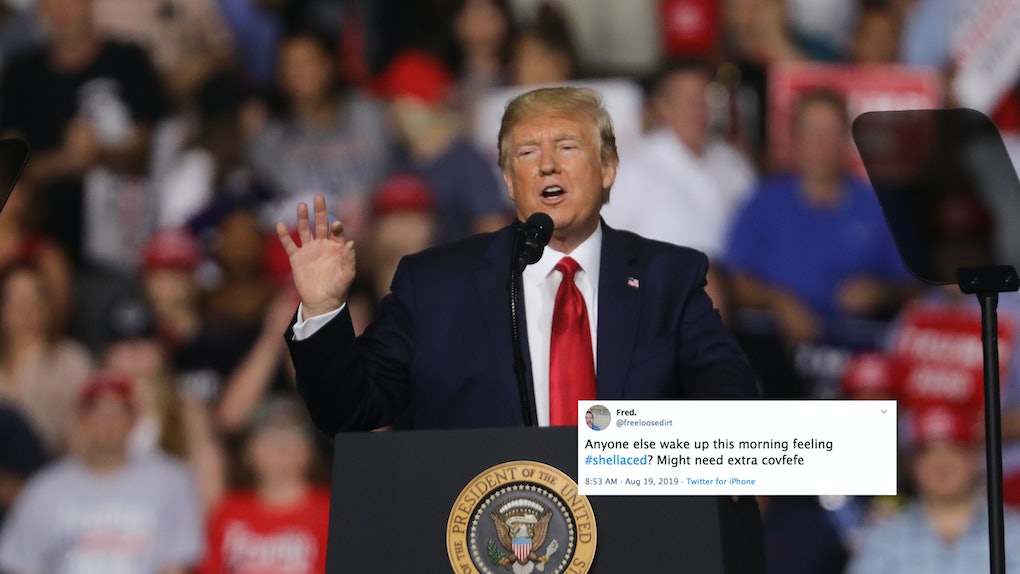 These Tweets About Donald Trump's "Shellaced" Typo Are Ruthless

Look, adjusting to Monday isn't always easy. For many of us, it takes time to recover from the weekend and hop back into the work week. Well, the president might also suffer from this problem, because these tweets about Donald Trump's "shellaced" typo aren't holding back. I'm going to guess that Trump needs some more coffee.

On the morning of Monday, Aug. 19, President Donald Trump took to Twitter to attack former White House Press Communications Director Anthony Scaramucci. However, there was one problem with the tweet, and it caused a roar over Twitter. In the tweet, Trump incorrectly typed that Scaramucci, who served in the White House for 11 days, from July 21 to July 31, 2017, had gotten "shellaced" during the 2016 presidential primary. Trump has since deleted the tweet and reposted it with the correct spelling of "shellacked."

Anthony Scaramucci is a highly unstable “nut job” who was with other candidates in the primary who got shellaced, & then unfortunately wheedled his way into my campaign. I barely knew him until his 11 days of gross incompetence-made a fool of himself, bad on TV. Abused staff,...

Tensions between Trump and Scaramucci have escalated over recent weeks, but Trump's Twitter attack on the former White House aide could have probably been spell-checked first.

Even though Trump corrected the tweet about an hour later, the typo wasn't lost on Twitter. Immediately, users started roasting the president over the word "shellaced," and they were pretty ruthless.

Unfortunately for Trump, this isn't the first time his fingers have slipped on the keyboard. In May 2017, Trump attempted to call out the "fake news" media for negative press, but accidentally typed "covfefe" in the Twitter post. Immediately, "covfefe" started trending on Twitter. More recently, in July 2019, Trump mentioned meeting the UK's Prince Charles, the Prince of Wales, but accidentally wrote "Prince of Whales." The tweet has since been deleted, but Twitter sure loves a good Trump typo.

Trump's Twitter typo might have caught the attention of social media, but his revised series of tweets made some bold comments about Scaramucci. After calling Scaramucci a "highly unstable nut job," he also commented on alleged trouble in his marriage.

... got fired. Wrote a very nice book about me just recently. Now the book is a lie? Said his wife was driving him crazy, “something big” was happening with her. Getting divorced. He was a mental wreck. We didn’t want him around. Now Fake News puts him on like he was my buddy!

In a tweet, Scaramucci clapped back with a response from his wife, who apparently said that "at least" she'd had her coffee before the president tweeted an attack on her. Elite Daily reached out to representatives of Scaramucci for any additional response to Trump's tweets, but did not hear back in time for publication.

Trump may have chosen Twitter to call out his former aide, but Scaramucci is resorting to other measures. Despite working for Trump's administration, Scaramucci withdrew his support from the president on Monday, Aug. 12, and told CNN's John Berman that he would not endorse his reelection. On Aug. 19, Scaramucci told CNN's Alisyn Camerota that he plans to form a "coalition" against Trump ahead of the 2020 election, and coordinate with former administration officials who want to find an "alternative" to Trump for the 2020 race. The Trump administration has a famously high turnover rate, with some 34 officials who have resigned or been fired as of July 2019, per the BBC. However, Scaramucci also believes that Trump will withdraw from the election himself, and predicts it will happen in March 2020. While speaking to Vanity Fair on Friday, Aug. 16, Scaramucci didn't hold back on his prediction. He said,

Well, clearly these two aren't going to push aside their differences anytime soon. No matter what happens with former friends and allies, though, at least you know autocorrect will never turn on you.