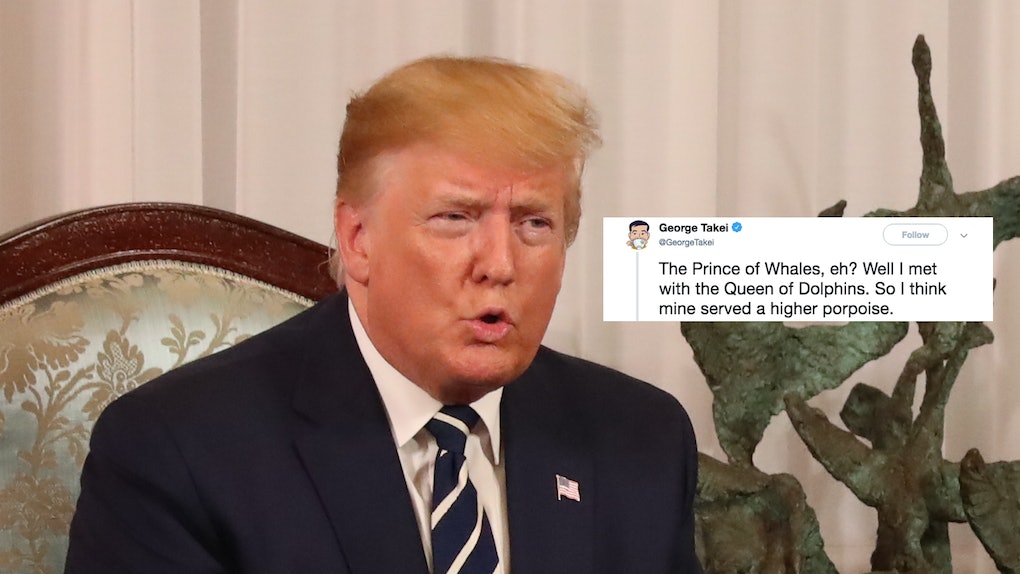 On this episode of "and I oop," politics edition, President Donald Trump made a (now-deleted) mistake on Twitter that caught all of social media's attention. Last week, Trump met with notable political figures during his state visit to the United Kingdom, but the president made one humorous mistake while discussing a particular meeting. Feeling down on this Thursday? Just take a look at these tweets about Donald Trump's "Prince of Whales" mistake, and you'll be laughing in no time.

On Thursday, June 13, Trump posted a now-deleted tweet discussing his regular meetings with "foreign governments," and name-dropped the likes of Emmanuel Macron, the president of France; Leo Varadkar, the prime minister of Ireland; and Queen Elizabeth of the United Kingdom. However, Trump also mentioned meeting with Prince Charles, the Prince of Wales, but accidentally misspelled his title as "Prince of Whales." Party foul. The now-deleted tweet read,

I meet and and talk to "foreign governments" every day. I just met with Queen of England (U.K.), the Prince of Whales, the P.M. of the United Kingdom, the P.M. of Ireland, the President of France and the President of Poland. We talked about "Everything!" Should I immediately call the FBI about these calls and meetings? How ridiculous! I would never be trusted again.

Judging by the tweet, it looks like Trump was trying to "sea" as many officials as he could during his UK visit. Naturally, once Trump posted the tweet, the internet immediately started calling the president out for his typing error, and came up with some material that's worthy of a prize.

Sure, people make spelling errors all the time, but this particular mistake was just too good to ignore. However, the tweet follows a controversial statement the president made to ABC News host George Stephanopoulos on Wednesday, June 12, where he stated that he would accept help from foreign entities in the 2020 presidential election. In addition, Trump also stated that he would consider not reporting that information to the Federal Bureau Investigation (FBI) even if he suspected something was "wrong." He said,

Trump went on to say that he felt that it was "wrong" that FBI Director Christopher Wray believes presidential candidates should report foreign governments attempting to interfere in presidential elections.

Trump's stance on this matter definitely comes at an interesting time. The president and his campaign team were at the center of a two-year investigation by Special Counsel Robert Mueller to find out if Trump's campaign team actively colluded with Russian operatives during the 2016 presidential election. The report, released in a redacted form on April 18, found that the campaign hadn't colluded but it had expected to benefit from Russian election meddling, and expressly did not exonerate the president on obstruction of justice. Mueller formally closed his investigation on May 29, noting the Department of Justice (DOJ)'s policy that a sitting president cannot be indicted. In public remarks, he said it was "not an option" to charge the president with a crime, but repeated that the report had not exonerated the president. “If we had had confidence that the president clearly did not commit a crime, we would have said so,” Mueller said at the time. As of publication, Trump has not been formally accused of nor charged with any crime.

In a statement following Mueller's May 29 remarks, White House Press Secretary Sarah Huckabee Sanders said in a statement that "The report was clear — there was no collusion, no conspiracy — and the Department of Justice confirmed there was no obstruction."

No matter what the context was, Twitter was absolutely reeling from Trump's typing mistake. Oh Internet, never change.