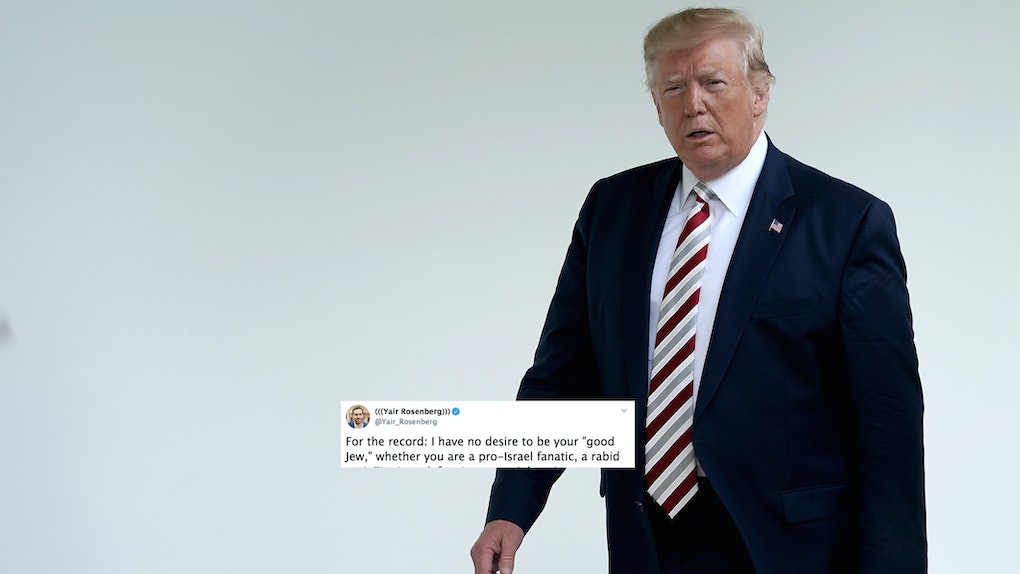 These Tweets About Donald Trumps "Disloyal Jews" Comment Clap Back

Another day, another viral hashtag. On Tuesday, Aug. 20, President Donald Trump discussed (yet again) Israel's move to block Reps. Ilhan Omar and Rashida Tlaib from entering the country. At the same event, Trump also made other controversial remarks about how Jewish people should vote, and these tweets about Donald Trump's "disloyal Jews" comment have people accusing the president, in turn, of anti-Semitism.

On Aug. 20, Trump spoke to reporters in the Oval Office and criticized Jewish Americans who vote for the Democratic Party, suggesting that they are ignorant or disloyal. "I think any Jewish people that vote for a Democrat — it shows either a total lack of knowledge or great disloyalty," Trump said. The president's comments stirred controversy among the public, with many critics suggesting Trump's remarks were anti-Semitic and attempts to weaponize the Jewish population for political gain. Elite Daily reached out to the White House for further comment on Trump's comment and response to the criticism, but did not hear back in time for publication.

However, the controversy didn't end there. On Wednesday, Aug. 21, Trump took to Twitter to quote conservative radio host Wayne Allyn Root, who had claimed Israeli citizens love Trump as if he was the "King of Israel." Seriously, you can't make this stuff up. The tweet read,

... like he’s the King of Israel. They love him like he is the second coming of God... But American Jews don’t know him or like him. They don’t even know what they’re doing or saying anymore. It makes no sense! But that’s OK, if he keeps doing what he’s doing, he’s good for...

After the interview, the hashtag #disloyalJews started trending on Twitter. Many Jewish Americans called out the president for his controversial remarks. The White House did not immediately respond to Elite Daily's request for comment on the hashtag.

The idea that Jewish people are more loyal to the international Jewish community than to their nation or national identity has a long anti-Semitic history. In the 20th and 21st century, the trope has also taken form in the notion that Jews' primary allegiance, no matter what their nationality, is or should be to Israel. Ironically, Trump may himself be associating American Jewish loyalty more with loyalty to Israeli Prime Minister Benjamin Netanyahu. In April 2019, he referred to Netanyahu as "your prime minister" during a speech to American Jews. Netanyahu, the leader of Israel's right-wing party, has a notably cozy relationship with Trump.

However, as much as Trump may not like it, American Jews don't tend to favor the Republican Party. In November 2016, the Pew Research Center found that 71% of Jewish voters cast their ballots for Democrat Hillary Clinton during the 2016 presidential election, and in 2018 found again that nearly 80% of Jewish voters swung Democratic in that year's midterm elections. In fact, in the past 20 years, Democrats have never won less than two-thirds of the Jewish vote, per Pew.

Trump's comments follow his repeated attacks on Tlaib and Omar, who are both Muslim, for alleged anti-Semitism. In February 2019, Omar suggested that American Israel Public Affairs Committee (AIPAC), which is a pro-lobbying group in United States politics, has paid American politicians to support pro-Israel policy decisions. Omar later apologized via Twitter for her comment, but still stood by her statements about "problematic" lobbying groups in America. Trump has claimed via Twitter both women "hate Israel and all Jewish people," and even suggested that Israel block their entry. On Monday, Aug. 19, the congresswomen were blocked from a planned trip to the West Bank in Israel to address political tensions between Israel and Palestine.

Trump isn't a stranger to controversial comments, but this one might have the biggest consequences yet. Stay tuned for more updates, because Twitter definitely has some opinions.