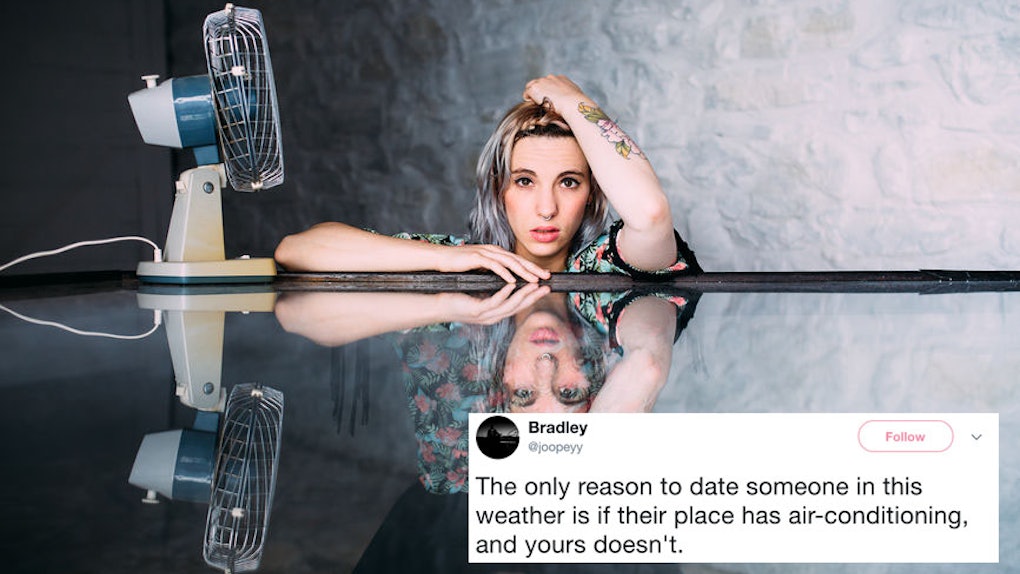 These Tweets About Dating People For Their Air Conditioning Are Hilarious

I've lived in South Florida for the past eight years and I spent my life before that in the Caribbean so I know what it's like to be hot all. the. time. It wasn't until I spent a summer in New York City though, that I truly got on board with the idea of dating people for their air conditioning. The nearest beach was no longer a quick walk or drive away and central air conditioning proved just as elusive. Unfortunately, I wasn't able to put my master plan into action because I was a high school junior at the time, traveling with my parents. I'm happy to report that others have since done it for me and I salute them.

Samantha*, a 25-year-old New Yorker, confirms that this is totally a thing people do in the city because she's guilty of it, too. She says, "I dated my ex-boyfriend Kyle* for many reasons. He was kind, caring, had a similar sense of humor... He also had his own one-bedroom apartment with two air conditioning units and access to a summer house in the Hamptons."

For Samantha, being with Kyle was like being on a tropical vacation and, yeah, it was drinks-inclusive. Another round for me, Kyle! She says, "When I first moved to the city, my life was pure chaos and having this little, chill oasis was actual paradise. Plus, he always seemed to have cold beer on hand. I definitely stayed with him longer than I should've because our summers spent together were THAT good." Get you a partner like Kyle who keeps their air conditioning units gassed up and their fridge stocked with ice-cold, alcoholic beverages all summer long.

If you think about it, this is peak survival mode, which is what most people move to crowded cities to learn in the first place. Here are 10 people who had the same idea about dating someone purely for their air conditioning.

Is it OK to put this in your Tinder bio? I think yes.

You could be chilling (literally) with your new bae instead of melting in student housing.

Think of it as temporary off-campus housing.

No one's saying you have to marry this person.

Just be sure to break it off before cuffing season starts.

Hi, so what do you do for living? And do you have central air conditioning at your apartment?

You have high standards and that's OK.

It's time to go after what you really want in life.

I think if we're all being honest, this is the basis of most summer flings.

No air conditioning, no cuddling.

You should never settle for less than you deserve in a relationship.

Lay down your demands upfront.

I'm pretty sure this is how Dua Lipa's "New Rules" goes.

To recap, here's a list of items you'll need to get your hands on before summer: a pair of sunglasses, a stack of your favorite beach reads, and a girlfriend or boyfriend with air conditioning at their place. How else are you supposed to enjoy rooftop hangs without a cool place to retreat to when you overheat?

If it eases your guilt, remind yourself that this is actually a two-way street. You get to enjoy comfortable temperatures in the middle of summer and they get to enjoy your fabulous, sweat-free company. Plus, the cooler you are, the less miserable you are, which is good news for everyone in your path.

Until you manage to lock in an apartment — oops, I mean a partner —you can try investing in a small inflatable pool for your balcony, making your own summer-themed popsicles, or freezing a gel eye mask before wearing it to bed. The goal here is to avoid a reenactment of Olaf's demise in Frozen. Where's Elsa when you need her to conjure up your very own snow flurry to follow you around? Ugh.

Anyway, I've got your new dating app bio right here: "I don't want to build a snowman but I do want warm hugs from a prince or princess with central air." What? It's honest and cute.

More like this
20 Tweets About Raya That Show Just How Exclusive It Really Is
By Corinne Sullivan
Getting Over Your Anger At An Ex Is Hard, But Not Impossible
By Caroline Colvin
Aubrey Plaza's Instagram Revealing She's Married Surprised Her Fans
By Cianna Garrison
Stay up to date