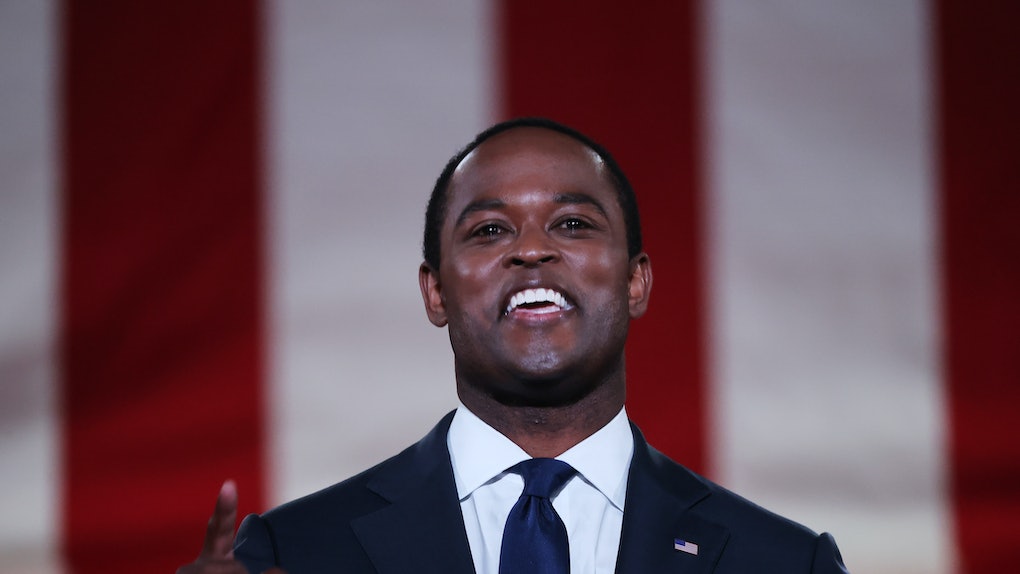 On Tuesday, Aug. 25, all eyes were on Kentucky Attorney General Daniel Cameron as he spoke during the second night of the 2020 Republican National Convention. Cameron has come under fire for not arresting or charging the police officers involved in the shooting that killed Breonna Taylor in her Kentucky home on March 13, and to many people's surprise, he mentioned Taylor by name during his address. Considering the sentiment about his perceived lack of action, viewers quickly took to social media to criticize the move. These tweets about Daniel Cameron's 2020 RNC speech call out his passing mention of Taylor in his remarks.

Cameron delivered pre-recorded remarks from the Mellon Auditorium in Washington, D.C., and it didn't take long for the 34-year-old attorney general to make mention of Taylor, which came during a point in his address where he quoted President Dwight D. Eisenhower. Prior to invoking the 34th POTUS, Cameron criticized recent anti-racism and Black Lives Matter protests and lauded the GOP as working toward justice and equality.

"Republicans do recognize those who work in good faith towards peace, justice, and equality," he said. "In fact, it was General Dwight Eisenhower, a future Republican president, who said, 'Democracy is a system that recognizes the equality of humans before the law.' Whether you are the family of Breonna Taylor or David Dorn, these are the ideals that will heal our nation’s wounds."

People were quick to note that Cameron didn't mention the incidents of police brutality that have led to recent Black Lives Matter protests he slammed as being filled with "anarchists" who've been "mindlessly [tearing] up American cities." And considering the officers who fired the shots that killed Taylor have yet to be held accountable before the law, viewers also took to Twitter to express their anger that Cameron, the person tasked with bringing charges against the officers, was claiming to serve justice in this case. Elite Daily reached out to Cameron's office for comment on the reaction to his speech, but did not hear back at the time of publication.

Taylor, a 26-year-old emergency room technician, was killed after three plain-clothed police officers executed a no-knock warrant on March 13 while searching for suspects in a drug case. No drugs were found in Taylor's home. There is no body camera footage of the shooting, and there are differing accounts coming from Louisville Police and Kenneth Walker, Taylor's boyfriend. Walker says he fired shots when the police allegedly entered their home without announcing themselves, but the police department claims the officers made themselves known. According to The New York Times, Taylor was shot several times by police officers, killing her. As of publication on Aug. 26, no arrests or charges have been made in the case. Two of the officers are still on the force, and a third officer who was fired is appealing to get rehired. Elite Daily reached out to Cameron's office for comment on the current state of the investigation, but did not hear back at the time of publication.

Following Cameron's speech, viewers took to Twitter to lambast Cameron for mentioning Taylor and her family without fully acknowledging she was killed by police. Additionally, people couldn't reconcile how Cameron could hold up Taylor's case as an example of democracy and justice when her family is still waiting for her killers to be arrested and charged.

In his speech, Cameron also took aim at 2020 Democratic presidential nominee Joe Biden and his past comments about Black voters, as well as touted the GOP and the re-election of President Donald Trump.

Shortly before he spoke during the second night of the RNC on Aug. 25, Cameron told Fox News the investigation into Taylor's killing was still ongoing. Cameron said he would be meeting with the FBI and the U.S. Department of Justice as the investigation progresses. "We continue to await some key information from the FBI as it relates to a ballistics report. Once we get that, we'll be able to assess that information and then make conclusions from there," he said.

Meanwhile, on Tuesday, Kentucky Gov. Andy Beshear called for Cameron to move forward more quickly with the investigation, according to local news outlet WDRB. Beshear, who is a former attorney general, said, "We still don’t have an answer or the facts in the Breonna Taylor case … and those that are weary [of the ongoing protests], imagine what that family must feel like having to wait this long." He continued, "We at least need an explanation of what steps still need to be done on the process side."

There's no telling when the investigation into Taylor's killing will wrap up, but if the reaction to Cameron's RNC speech is any indication, the calls for justice for Breonna Taylor won't stop until people believe justice has been served.