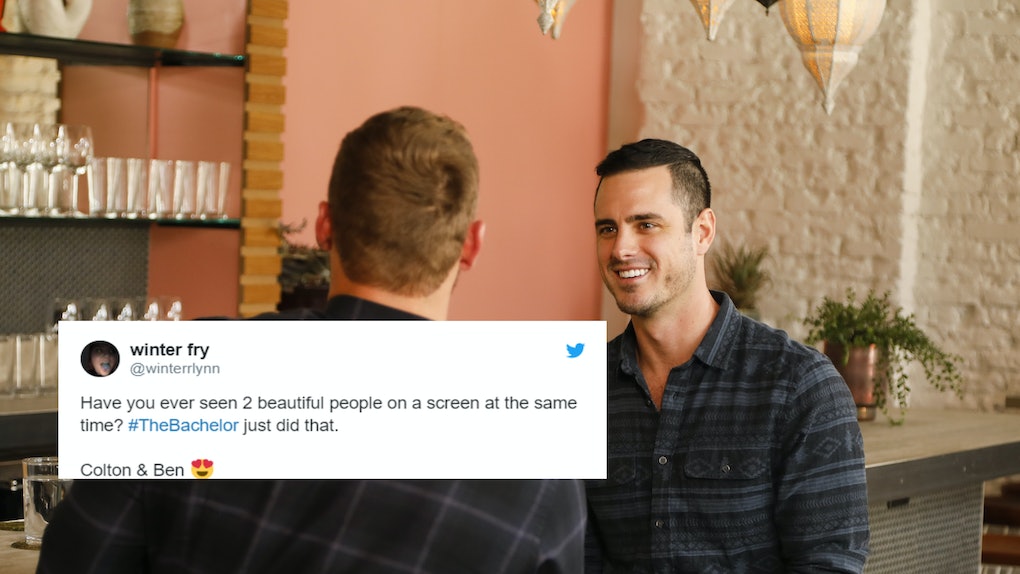 These Tweets About Colton & Ben Higgins Are Everything Bachelor Nation Needs

What do you get when two Bachelors meet? Well, I'm still looking for the perfect punchline. But when Colton Underwood spent time with Season 20 lead Ben Higgins on Feb. 18's Bachelor episode, the two Denver-based men understandably vented about the difficult process of finding love. While their convo was short and sweet, these tweets about Ben Higgins and Colton on The Bachelor prove that fans could have used much more of the duo.

ICYMI, Ben proposed to Lauren B. the First at the end of his 2016 season. Despite lasting longer than most Bachelor couples, the two called it quits in May 2017. The split didn't sour America's love of Ben, who has stayed active in the franchise with an appearance on Bachelor Winter Games and a co-hosting stint on The Ben and Ashley I. Almost Famous Podcast alongside popular Bachelor contestant Ashley Iaconetti. Ben didn't have to deal with as strong of a label as virgin Bachelor Colton has experienced, but he received flak for telling both of his final two women he loved them. Are you taking notes, Colton?

Before Colton met with the women in Denver, the two Bachelors got together for a catch-up. Colton admitted to feeling exhausted, but Ben advised him that the next few weeks would be the most emotional yet. Colton then shared his dilemma about the women's warnings of someone in the group not being ready for marriage. Ever the counselor, Ben suggested being totally open with the contestants.

If Colton learned a new lesson from his chat with Ben, good on him. But as for Bachelor Nation, they were more invested in the return of one of their favorite leads.

Of course, everyone is entitled to their own opinions, and some viewers on Twitter weren't so happy about Ben's appearance. Given that his Bachelor relationship didn't last, a few fans questioned if he was the best alum to bring back. Others just aren't into Ben in general, but they did like the idea of him and Colton having a solid bromance.

While it made sense for these two to get together for a stateside chat, it turns out that Colton already spoke to Ben before he even met his season's women. Following the Season 23 premiere, ABC released a deleted scene showing Colton opening up about his nerves to Ben. I guess the premiere had one too many live marriage proposals to squeeze this conversation into the final product.

At yet another bar, Ben advised him to just enjoy his time as the Bachelor and fulfill the job with grace.

Their first chat was basically the relaxing one-on-one date most Bachelor contestants can only dream of, so we should probably thank Ben for Colton's relatively smooth first night at the mansion. We'll have to wait and see if his most recent dose of advice settles well. On the other hand, do you think Ben would be up for a repeat season of The Bachelor?

More like this
Peter Weber’s Quote About How ‘Bachelor’ Producers Get Contestants To Kiss Is Wild
By Abby Monteil
Billy Eichner Joked Colton Underwood Was The "First Gay Bachelor" 2 Years Ago
By Corinne Sullivan
Katie Thurston's 'Bachelorette' Season 17: Cast, Premiere Date, & More Info
By Abby Monteil
Stay up to date