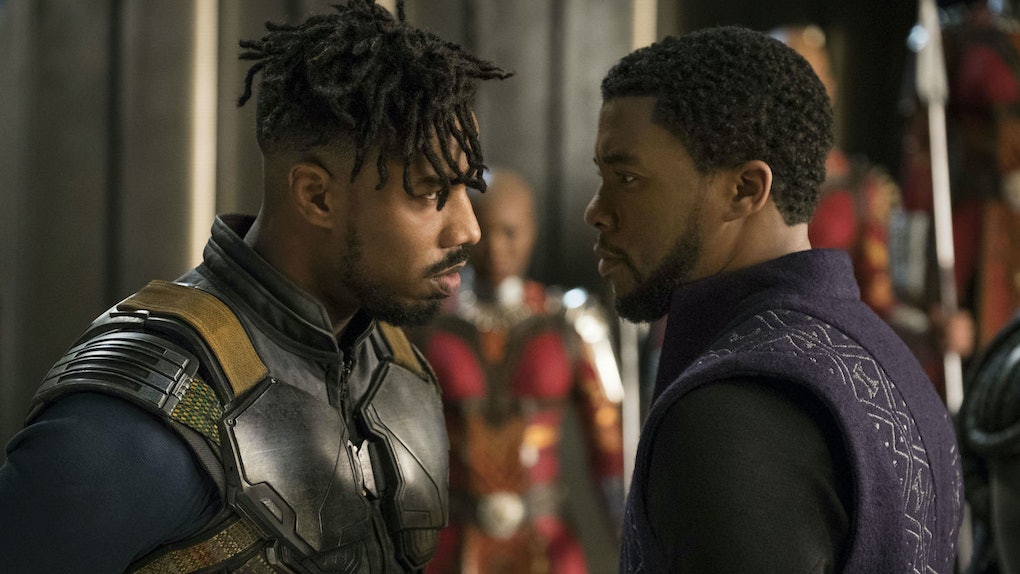 Big-budget superhero movies may rule at the box office, but they rarely ever receive critical recognition at Hollywood's biggest awards shows... until now, that is. Black Panther is poised to change how Hollywood views superhero movies, and it is doing that by securing nomination after nomination this awards season. Fresh off three Golden Globe nominations, Black Panther secured another major nomination for the SAG Awards on Wednesday morning, and fans are freaking out. These tweets about Black Panther's SAG nomination show just how much everyone is rooting for the movie.

On Wednesday morning, Laverne Cox and Awkwafina revealed at the SAG Awards nominations ceremony that Black Panther is nominated for the Outstanding Performance by a Cast in a Motion Picture. The ensemble cast trophy is considered the ceremony's biggest award, akin to the Best Motion Picture prize at the Oscars or Golden Globes. So although this was the only major acting nomination that Black Panther received at this year's SAG Awards, it is still something for fans to celebrate. The action flick also received a nomination for Best Stunt Ensemble in a Motion Picture prior to the acting nominations.

Snagging that big nomination at the SAG Awards is pretty major for Black Panther, and it also strengthens the growing prediction that it could break ground as one of the very few blockbuster superhero movies to ever be nominated for Best Picture at the Oscars. With the SAG Awards nomination for Best Ensemble Cast under Black Panther's belt, movie buffs are now pretty sure that the Academy will follow suit and put the Marvel movie up for its biggest prize when the Oscar nominations are announced later this year.

Obviously, every Marvel fan was freaking out on social media after Black Panther received its big SAG Awards nomination. Check out some of the best tweets from fans celebrating the recognition for Wakanda:

The nomination also means that Black Panther is one of only three movies that have been nominated in the main film category for the Golden Globes, Critics' Choice Awards, and SAG Awards this year. The only other two movies to be nominated for top prize at all three awards ceremonies are A Star Is Born and BlaKkKlansman.