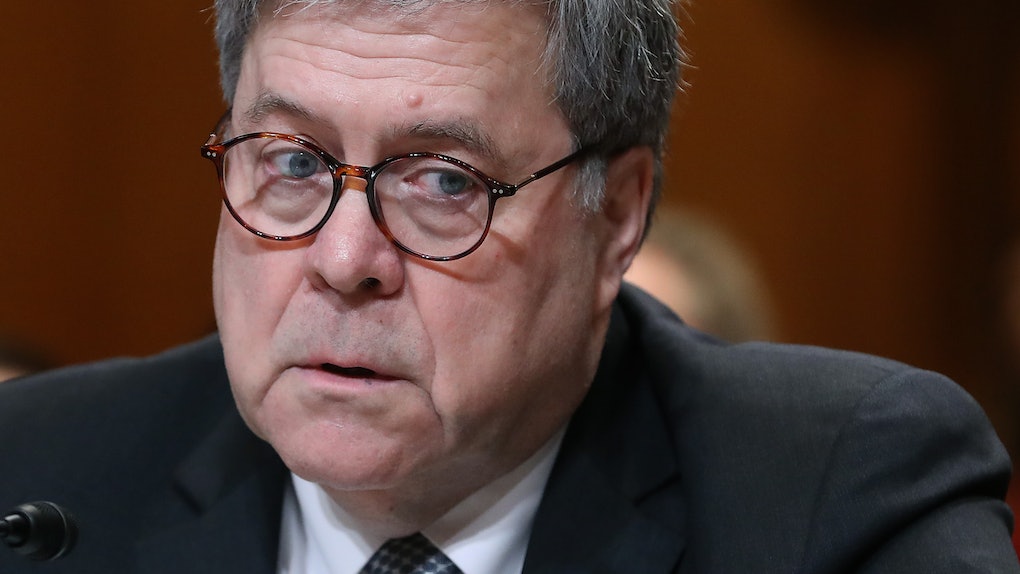 The furor over Attorney General William Barr's handling of Special Counsel Robert Mueller's report into possible collusion between the Trump 2016 campaign and Russia continues. The attorney general has been facing backlash since late March, when he released a summary letter about the report, which included his assertion that the investigation did not find President Donald Trump guilty of a crime. The letter, which was sparse on details and preceded the report's release by several weeks, received some side-eye — including from Mueller, apparently. These tweets about Barr and Mueller's disagreement over the report summary show what people are thinking in the wake of the news.

And it really is a bombshell revelation, all things considered. In his March 24 summary of the report, Barr said that the investigation had found no collusion but explicitly fell short of exonerating Trump of obstruction of justice. He wrote that he and Deputy Attorney General Rod Rosenstein had "concluded that the evidence developed during the Special Counsel’s investigation is not sufficient to establish that the President committed an obstruction-of-justice offense." As of publication, Trump has not been officially accused of nor charged with any crimes.

But some people second-guessed that once the full report was made public. The report cited 10 instances of possible obstruction, including Trump's "efforts to prevent public disclosure of evidence," "efforts to curtail the special counsel's investigation," and his termination of former FBI Director James Comey. Even Mueller was apparently frustrated at the summary. In a March 27 letter from Mueller to Barr released by the House Judiciary Committee, Mueller said that the summary did not "capture the context, nature, and substance" of his findings.

"There is now public confusion about critical aspects of the results of our investigation," the letter continues. "This threatens to undermine a central purpose for which the Department appointed the Special Counsel: to assure full public confidence in the outcome of the investigations." Oooh. You can read the full letter here.

Some in the Twitter world are seriously taken aback by the news, with many pushing for Barr's removal from office. It's especially concerning because Barr told lawmakers in April that he "[didn't] know" whether Mueller supported his conclusion. In his testimony before the Senate Judiciary Committee on May 1, Barr said that he had offered to let Mueller read the letter before its release, and stated that it was meant only to "notify the people as to the bottom line conclusion."

"We were not trying to summarize the 410-page report," he said. Elite Daily reached out to the Justice Department for further comment, but did not immediately hear back.

People are seriously not happy about Barr's letter, whether or not it was meant as a summary. The attorney general is set to testify before Congress on the report on May 1 and May 2, though, so maybe the public will have clarity then.

As for Trump? He's taken a victory lap, saying that he has been "exonerated" by the report.

"NO COLLUSION, NO OBSTRUCTION," he tweeted on May 1. "Besides, how can you have Obstruction when not only was there No Collusion (by Trump), but the bad actions were done by the 'other' side? The greatest con-job in the history of American Politics!"

He tweeted something similar when Barr shared his summary of the report, tweeting, "No Collusion, No Obstruction, Complete and Total EXONERATION. KEEP AMERICA GREAT!"

Elite Daily previously reached out to the White House for comment on Trump's "full exoneration" remark, but did not hear back.

This drama has had so many twists and turns already that it's hard to tell what will happen from here. For now, let's just see what happens during Barr's testimony.