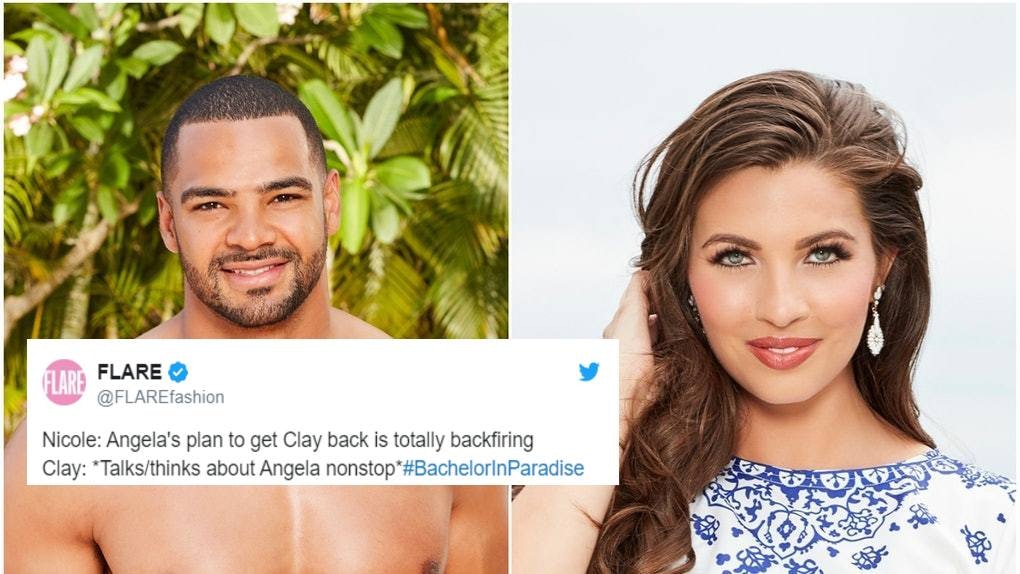 Exes rarely have to reunite on Bachelor in Paradise, but Clay Harbor and Angela Amezcua have become an exception to that rule. Although Clay was in a relationship with Nicole Lopez-Alvar, he didn't quite agree with Angela pursuing new bonds in front of him during Week 5. However, fans pointed out that Clay's mindset in this situation wasn't exactly the most fair. These tweets about Angela and Clay on Bachelor in Paradise call out a double standard in Clay's perspective of his ex finding love.

After seeing her at Chris Randone and Krystal Nielson's wedding for the first time since their breakup, Clay used his private time with Angela to tell her he still cared for her. Angela wasn't easily wooed; she used the opportunity to call Clay out for how abruptly he ended their relationship. According to her, he broke up with her soon after the couple discussed having kids and buying a house together. When she later entered the Paradise beach as a contestant, Clay panicked while Nicole worried about the chance of the exes reconnecting.

Despite their fears, Angela didn't seem all too concerned with Clay. She first asked Mike Johnson on a date, and later agreed to an outing with Chase McNary. Although Clay admitted to having no romantic feelings for Angela, he revealed he didn't like having to see her form new connections with other men. "The fact that I'm subjected to her dating in front of me?" Clay said. "It's brutal. Brutal!"

Seeing as Angela appeared perfectly fine with existing alongside Clay, fans on Twitter couldn't help but notice that Clay's reaction to her dating was a bit of a double standard. He can date Nicole, but Angela isn't allowed to hang out with other men? Bachelor Nation had some thoughts.

While Angela was seemingly thriving on the beach, Clay wasn't enjoying the idea of working on his own relationship while watching his ex do the same. Before the week's rose ceremony, he took Angela aside to air his grievances. He promised her that he still respected her, but they ultimately just didn't share the same life goals, which, he said, was why he ended their relationship.

After Angela complained that Clay would spend up to four hours a day in the gym during their relationship, Clay dug even deeper into the reason why he did't see them as a match. But when he claimed he wanted more than her desire to have a family, Angela wasn't buying it. She reminded him, "Two days before you broke up with me out of the blue, you asked me, 'What do you think our babies will look like?'"

While the two more or less agreed to just move on, Bachelor Nation found Clay's sketchiness even more obvious during this conversation.

Judging by Angela's handling of this, she seems to be rising above the awkwardness that comes with temporarily living alongside Clay. Although Clay may still struggle with watching her develop another love connection, Bachelor Nation is definitely here for her finding her rebound. You go, girl!