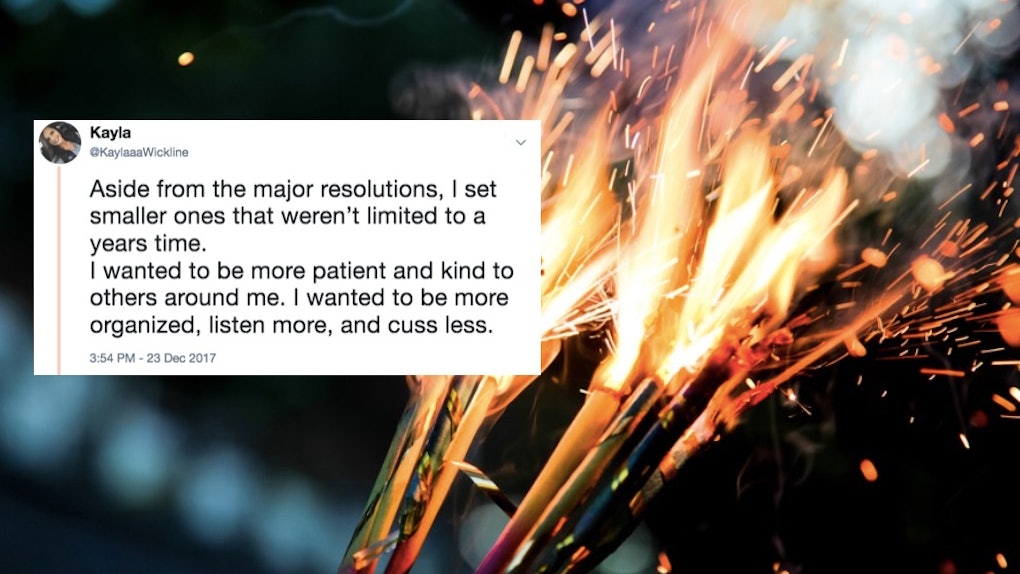 As you're running around trying to tie up loose ends before the new year, you might start thinking back to resolutions that you made in the beginning of 2017. I'll admit that I am very much into make new year's resolutions, but keeping them is another story. That doesn't appear to be the case for everyone who sets goals for themselves in the new year, though. If you're looking for some inspiration to jumpstart your 2018 resolutions, all you need to do is take a look at these tweets about 2017 new year's resolutions being accomplished.

Before I get to the inspiring AF tweets about people doing the damn thang when it came to keeping resolutions in 2017, it's helpful to look at why you (and me) might not have been successful in the past. According to Psychology Today, Psychology professor Peter Herman explained that the likelihood of failing to achieve your resolutions is due to "false hope syndrome," which means that your resolution is significantly unrealistic and out of line with your internal view of yourself. Ouch!

Don't fret, though, because all you need to do to give yourself a better shot at success is to change up your thinking and focus on certain areas of the your life that you'd like to improve, rather than specific time-constrained goals, according to Peter Bregman, a leadership coach and consultant.

If you're thinking it's still tall order, let's take a look at these people who actually accomplished their resolutions in 2017.

Twitter user Kayla (@KaylaaaWickline) posted a thread on Dec. 23 about some of her accomplishments.

Kayla took a broad approach to some of her resolutions in 2017, including trying "to be more patient and kind to others."

"Aside from the major resolutions, I set smaller ones that weren’t limited to a year's time."

She also set some concrete goals and put in the work to achieve them — and found her passion in the process.

Kayla is serving up some straight resolution inspiration.

Paying off student debt is definitely worthy of "champagne at 9 a.m."

This winner accomplished all of their 2017 resolutions, including making new friends and exploring the outdoors.

This is a very impressive year, TBH.

I bet it felt so good to check those off of the resolution list.

Now you can spend 2018 playing piano in your new house.

One more bit of resolution realness from Kayla.

Not everything can be accomplished in 365 days, but if it leads you "in the direction of being a more understanding and kind" person, then you're probably doing something right.

Honestly, I've been going back-and-forth with the idea of making any resolutions this year, but after seeing all of these tweets about people putting in the work to achieve their goals, resolutions don't seem so scary after all.

If sticking to your resolutions on your own seems nearly impossible, then you're in luck. As cliché as it sounds, there's an app for that! But really, there are apps that will help you achieve whatever goals are most important to you in this coming year. Check out these apps for new year's resolutions that will definitely help you stick to yours in 2018.

With a little help (whether it be from apps or friends) you can make 2018 the year that you stick to your new year's resolutions. Now that you've seen the tweet proof that it can actually be done, there's nothing stopping you from proudly checking off your very own resolution list a year from now. You've got this!

More like this
These Unique Gifts For Moms Are A Change Of Pace From A Bouquet Of Flowers
By Cianna Garrison
These National Pet Day 2021 Tweets Are Filled With The Cutest Dog & Cat Photos
By Daffany Chan
Why Can't I Change My Instagram App Icon? Try This Before Giving Up
By Cianna Garrison
Stay up to date