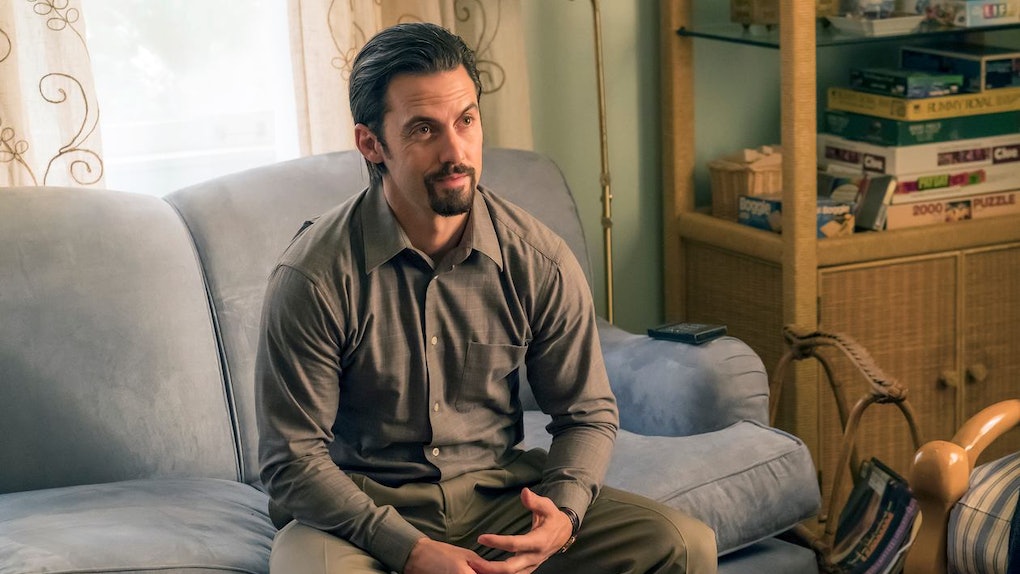 Since the This Is Us Season 2 finale aired, fans definitely can't help but sigh at the sight of Milo Ventimiglia, and it's not just because he's quite dreamy. The actor destroyed viewers' heart with his portrayal of patriarch Jack Pearson, ushering fans through Jack's alcoholism, the surprise reveal of his little brother, and ultimately perishing from injuries sustained in the Super Bowl fire in the Pearsons' home. We're due to delve deeper into Jack's story in new episodes this fall, and these This Is Us Season 3 Jack details will make fans even more ready for the return of the show.

Now with two Emmy nominations for his This Is Us work under his belt, Ventimiglia spilled about the upcoming third season in a podcast interview with Variety. The cast is nearly a month into filming new episodes, and both Ventimiglia and Mandy Moore have shared behind-the-scene photos of Jack and Rebecca in Episode 1. Both of the photos hinted at the season kicking off with the couple's origin story, and Ventimiglia and creator Dan Fogelman have already confirmed that episodes will also explore Jack's Vietnam days and presumably how he lost his brother Nicky there.

In the new Variety interview, Ventimiglia revealed even more tidbits about what his character will experience now that the mystery around his death has been solved, saying:

I know [all of Jack's Season 3 story], but script to script, I’m learning the little things, the little moments that collectively make up the larger pieces of who Jack is in whatever time we’re discussing –whether it’s Vietnam and his experience there and for the audience learning about his brother or maybe an early courtship of Jack and Rebecca. I already know a couple of moments where I’m with the adult ‘Big Three’ this year.

Jack has appeared alongside the present-day versions of his kids before, thanks to either drug-induced hallucinations or dreams, and I'm definitely curious if he'll pop up in 2018 without writers relying on these methods once again. Meanwhile, according to Ventimiglia, fans can also expect Jack's Season 3 timeline to range from the 1960s to '90s, suggesting that we'll see our youngest version of Jack (as played by Ventimiglia rather than a child actor) yet.

We also don't know how long Jack served in the Vietnam War, but Kevin's upcoming storyline ought to provide even more insight into Jack's days as a soldier. At the end of the Season 2 finale in the montage of the Big Three's flash-forward moments, Kevin is seen flying to Vietnam with Beth's cousin Zoe and looking at a photo of Jack and his army buddies. Jack's experience at war is also expected to explain more of why the character strives so much for goodness as a father. Ventimiglia told Variety, "What happened to him in his past that allowed him to say, ‘I’m choosing to be good?’ How does the good come from so much against him?"

When Fogelman first divulged some of Jack's Season 3 secrets to Ventimiglia, the latter told Entertainment Weekly:

Hmm, so can we assume that whatever plot twist comes up won't be as predictable as everyone figuring out that Jack goes back into the fire for the family dog?

Here's hoping that whatever twist is in store isn't as heartbreaking as Jack's Super Bowl Sunday demise. Season 3 of This Is Us premieres on Tuesday, Sept. 25, at 9 p.m. ET on NBC.

More like this
These Tweets Of 'Girl Meets World' Videos Show Why The Series Is Still Controversial
By Cianna Garrison
'Grey's Anatomy' Quotes That Will Heal Your Broken Heart
By Alexis DeCarvalho and Lexi Williams
'Succession' Season 3: Premiere Date, Cast, Plot Details, & More News
By Dylan Kickham and Ani Bundel
Stay up to date