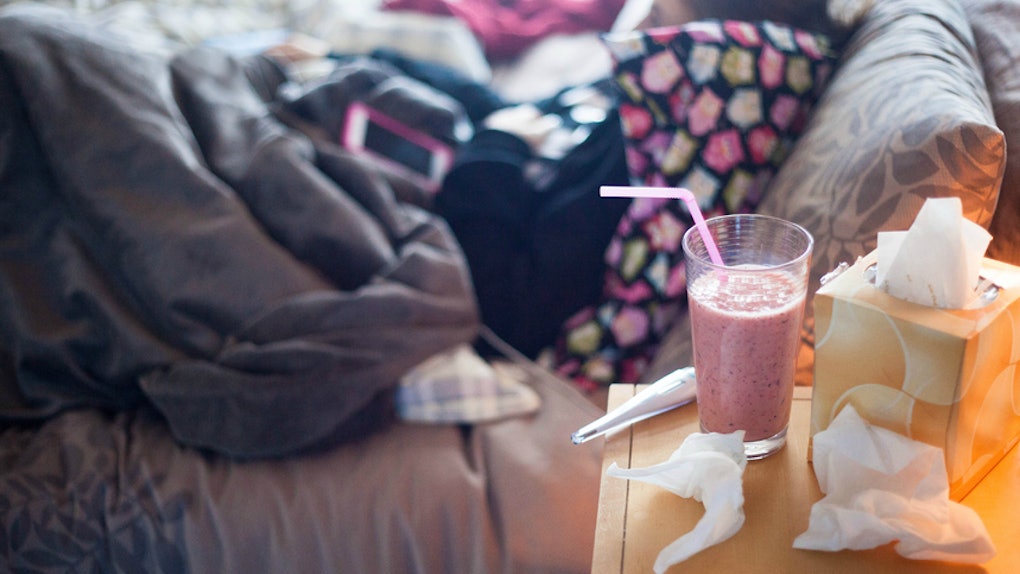 These STDs Have Cold-Like Symptoms, So You Might Want To See A Doctor If You Feel Sick

I don't think I've ever in my life taken a cold seriously. Sure, I stock up on meds and snacks while I hibernate under the covers, but my healthcare regimen usually stops there. As I binge-watch Gilmore Girls for the millionth time, I'm not exactly thinking about cold-like symptoms of STDs. Wait. Is that a thing? Unfortunately, yes. Some STD symptoms are frighteningly similar to cold symptoms, which is why you shouldn't necessarily brush off every fever and ache.

Dr. Tami Prince, OB-GYN and owner of Women’s Health and Wellness Center of Georgia, LLC, tells Elite Daily, "The common cold, also known as an upper respiratory infection (URI), is caused by the rhinovirus so any STD that is also caused by a virus can mimic cold symptoms." She adds that the STD most likely to feel like a cold is actually HIV but that others, like hepatitis, can have similar symptoms.

If, like me, wish it were easier to tell the difference between STDs and a cold, Dr. Prince is here to explain why some symptoms might be similar. "When your body becomes infected with a virus, the immune system’s natural response is to fight off the infection and rid it from the body. This response usually manifests as flu-like symptoms such as chills, fever, body aches, loss of appetite, fatigue, nausea, vomiting, and diarrhea. Since HIV and hepatitis are also viruses, the immune system’s response to these infections is similar to that seen in URI."

I suppose that's reasonable. But have you ever been sick and Googled your symptoms? I'm pretty sure after that, you thought you had two weeks to live because same. That's why it's important to know that while some symptoms might be similar, there are others that might indicate a more serious infection.

According to Dr. Prince, "Unlike the common cold, HIV and hepatitis infections usually overpower the immune system and continue to attack," which means that eventually you'll experience symptoms that feel more severe.

While HIV and hepatitis are the STDs most commonly associated with cold- and flu-like symptoms, I spoke to Dr. Cindy Duke, OB-GYN and medical director of the Nevada Fertility Institute, who says that there's one more STD that might feel like this — gonorrhea, but only if left untreated.

If this news feels a bit overwhelming, I'm right there with you. So to help you make sense of it all, I asked Dr. Prince and Dr. Duke to break down exactly what HIV, hepatitis, and gonorrhea might look like.

The body's initial reaction to the HIV infection looks a lot like the flu, which makes sense since HIV stands for "human immunodeficiency virus." Two to four weeks after you contract the infection, you may feel feverish, achy, and just plain sick. Other HIV symptoms include a sore throat, coughing, fatigue, and swollen lymph nodes. This is your immune system's natural response to most viral infections, which is why it can feel so similar to a cold or the flu.

Interestingly, Dr. Duke points out that these symptoms usually go away on their own, after which you may not show any additional signs of HIV for years to come.

If your cold- and flu-like symptoms do not improve within two weeks despite taking medication or if you have changed sexual partners within the last month, you should definitely get tested for HIV.

Dr. Duke adds that even if you do get tested at this point, it's advisable to do a follow-up test 12 weeks later since it can take up to three months after you've been infected with HIV for an HIV test to be positive.

As Dr. Duke points out, "HIV and hepatitis are viral infections like the cold or flu, so the body’s immune system responds to the infections in a similar manner." Particularly in the case of hepatitis B, which most people don't know they have, it can feel remarkably flu-like.

Symptoms include fatigue, loss of appetite, nausea, vomiting, joint pains, headaches, and fevers. These symptoms show up between six weeks and six months after getting infected and usually last a few weeks before going away on their own.

Hepatitis C, which is far less common than hepatitis B, is rarely transmitted sexually but produces many of the same symptoms as hepatitis B.

Unlike HIV and hepatitis, gonorrhea is a bacterial infection, not a viral infection. But if gonorrhea is left untreated, Dr. Duke warns it can cause fever, chills, and night sweats.

Luckily, non-flu-like symptoms of gonorrhea are easier to spot. These include discomfort when you pee, stomach pains, and unusual vaginal discharge.

You should get tested as soon as possible if you think you may have gonorrhea since long-term side effects include abscesses or pelvic inflammatory disease (PID) in women, deforming arthritis, and sepsis.

At the end of the day, the only way to know sure if you have an STD is to get tested. Dr. Prince says, "If you're in a monogamous relationship, I recommend testing once a year or if symptoms occur. Although you may be monogamous, your partner may not be so you need to protect yourself. If you change partners frequently, testing should occur before intercourse with your new partner. And if you're in the sex trade business, you should have even more frequent testing."

For more information about getting tested, you can contact your local Planned Parenthood health center, your campus clinic, or your private physician to schedule an appointment.