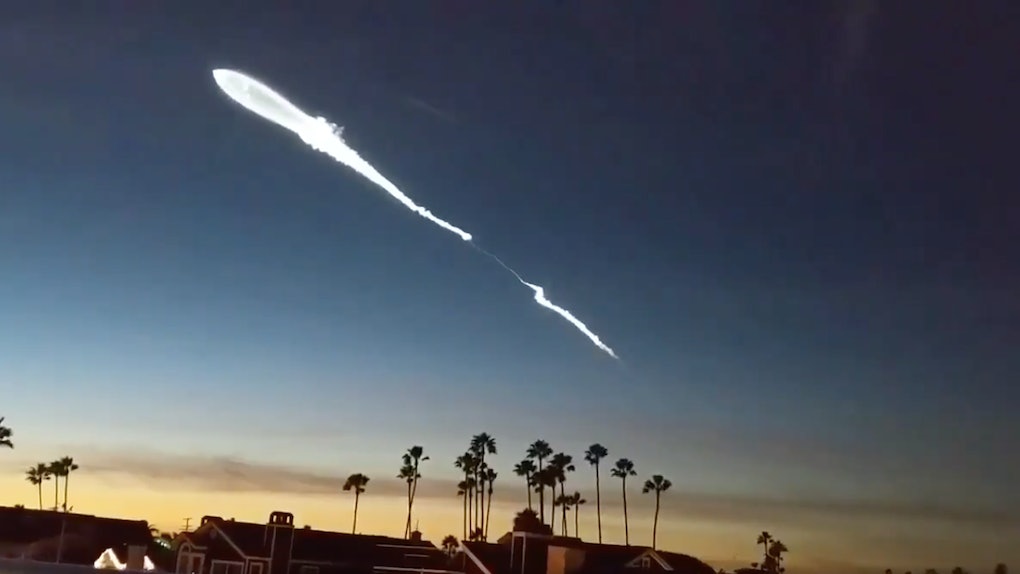 On Friday, Dec. 22, Californians took to Twitter to ponder what exactly they were seeing in the sky. Some called it a UFO; others had absolutely no idea what it was. However, they soon realized that it was a rocket, specifically the SpaceX Falcon 9 rocket, which launched from California's Vandenberg Air Force Base at 5:27 p.m. PT. Luckily for East Coasters, witnesses documented the sight, and their photos of the SpaceX rocket launch are unreal.

According to Space.com, the rocket was carrying 10 Iridium Next communications satellites into orbit, and all 10 satellites successfully reached their intended orbits. But even those without an intimate knowledge of rockets, space, or satellites (yes, you caught me) were still able to appreciate the novelty of seeing something from Earth shoot all the way up into space. Some might even call the sight "out of this world." Ugh, I crack myself up.

The actual launch took place in Santa Maria, California about 160 miles north of Los Angeles. However, people in all different locations posted their reactions on social media, including footage and photos of the launch itself. Amanda Stiles, Director of Space & New Frontiers at XPRIZE, posted a pretty clear video of the launch that was retweeted by tens of thousands of Twitter users.

It is unclear where Stiles' video was posted from, but others included their location with their posts. One user, Doug Ellison, posted a video of the launch from Alhambra, California, about 200 miles south of the Air Force base.

Another user posted a video of the view from Phoenix, Arizona.

Honestly, I feel like the only documentation I've seen of rocket launches has been videos and photos of the initial launch at the base, so it's pretty awesome to see photos of the rockets actually up in the sky.

Google employee Danny Sullivan uploaded a time lapse video of the launch, which allowed others to see the full progress of the rocket in a matter of seconds.

The Los Angeles Fire Department released a notice informing residents that the "mysterious light in the sky" was the rocket. However, the message didn't reach everyone who saw the so-called mysterious light. Down in Mexico, the news station Uno TV posted a video of the launch taken from Tijuana. In the video, you can hear people asking, "¿Qué es eso?" or, "What is that?"

Some commented not on the marvel of seeing a rocket launch into space, but rather the rocket's, um, interesting silhouette.

Some took all of the photos and videos of the launch as an opportunity to share conspiracy theories about what it really was. The first to kick it off was SpaceX's very own CEO, Elon Musk. Others quickly followed suit and offered their own hunches.

Reactions to the launch weren't all positive "oohs" and "ahhs" or jokes, though. Some were focused less on the beauty and more on concern and panic about the launch, which was unannounced.

One person in particular who was concerned about the origins of the light in the sky was Lana Del Rey. The singer posted a video of the rocket, saying, "Scared the sh*t out of me. if this isn’t one of Elon’s Rockets I swear to God I’m gonna jump into the ocean."

A number of other celebrities reacted to the SpaceX launch, mostly with confusion and mild concern.

After engaging with a few Twitter users and insisting that the launch was actually aliens, Elon Musk signed off for the night with one final tweet about SpaceX's next launch, which will take place in January. The rocket is called Falcon Heavy and will contain three rocket cores & 3X thrust. To be honest, I don't know what any of that means, but hopefully this warning will prevent any more panic, so people can focus on capturing another magnificent launch.