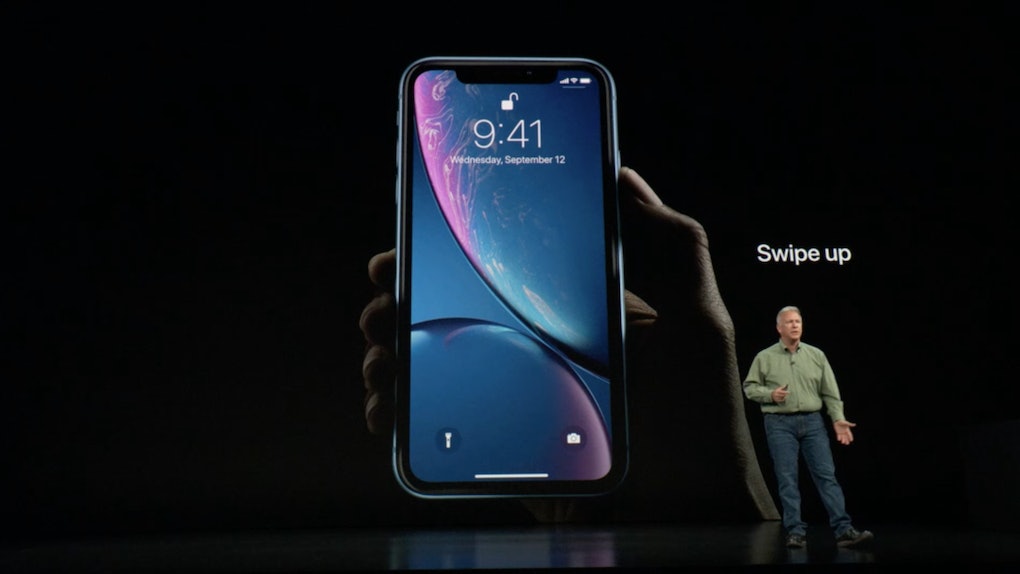 The wait is finally over for Apple diehards hoping to catch a glimpse of the tech giant's new smartphone lineup. These photos of the iPhone XR confirm that Apple's lowest cost new model, previously known as the iPhone 9, are so incredibly gorgeous. As previously reported, the budget option is even thinner than the iPhone X with many of the same cool updates, and you're definitely going to want to run and purchase it ASAP.

On Wednesday, Sept. 12, Apple unveiled its highly-anticipated iPhone XS, iPhone XS Max, and the iPhone XR. With the two iPhone XS models featuring significantly higher prices, it's unsurprising that all eyes were on the 6.1-inch LCD iPhone, which also boasts Apple's brand new A12 Bionic chip. Previous reports from 9to5Mac hinted that because of its full active LCD, courtesy of ‘Japan Pixel Eyes,' the iPhone XR could have bevels as thin as 0.5 mm. Those turned out to be very true on Wednesday. To put things into perspective, the iPhone X (which also features newer OLED technology) has a 1 mm bezel, which means that this new lower-cost option is significantly slimmer than its predecessors.

In addition to boasting a sleeker body, the iPhone XR is available in black, white, red, yellow, coral (!!), and blue, and features aluminum instead of stainless steel edges as well as a single rear camera. Unfortunately, a thinner body and an LCD screen will also give users inferior resolution and internal storage from what they've come to expect from last year's iPhone X, but there's been high demand from customers who prioritize the improved processing speeds (reportedly "20 to 30 percent" faster than that of 2017's model) and better battery efficiency at just $749.

While the hype has been significant with customers hoping to score iPhone X capabilities, even without a few of the more premium features, there have been a few hiccups on the way. While it's just $749, rumors first started swirling on Monday, Sept. 10 that the price tag was likely to be up to $849 from the $699 that was previously reported. According to a CNBC report, investment bank Goldman Sachs cited higher demand than expected as the reason for the bump in projected prices.

"We also take this opportunity to eat our hat somewhat on our cautious stance this Summer," Goldman analyst Rod Hall said, per the publication. "We had expected worse iPhone X demand and some pullback in the stock — clearly neither of these two things happened."

While the iPhone XR is still significantly cheaper than the iPhone XS and the iPhone XS Max at $999 and $1099, respectively, there have also reportedly been slight delays with its roll-out. A Monday report from Bloomberg revealed that the lower cost option will be shipped out in "limited quantities" due to production issues. Japanese website Macotakara first claimed that the launch would be pushed back because of manufacturing problems with fitting backlights on the phone's LCD screen (According to the website, mass manufacturing of Full Active LCDs has a very high failure rate). At the event, Apple revealed that you can pre-order the iPhone XR on Oct. 19 and it will ship out on Oct. 26.

While you might have to wait another month before you can get your hands on the iPhone XR, the lower price tag and the cool sleek design might make being patient well worth it.