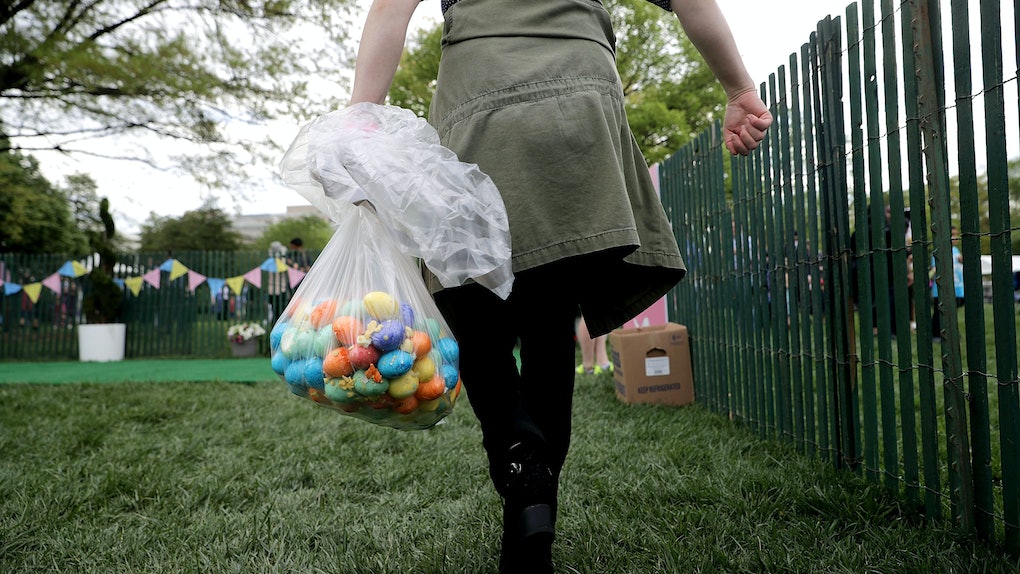 On Monday, April 22, thousands of children filled the White House South Lawn to take part in the 141st annual Easter Egg Roll. In addition to the traditional activities, attendees also enjoyed other festivities including live music and other games. Considering the egg roll happened just a few days after Special Counsel Robert Mueller released his redacted report to the public, the air was light, and was a nice way to de-stress for everyone involved.

During the Easter Egg Roll, children line up and push Easter eggs with a long, wooden spoon in order to get to the finish line first. While some people may not understand the excitement of this game, it's a huge hit with the children that attended the White House Easter celebration, and judging by the joyful looks on everyone's faces, they're loving every minute of it.

Which is not to say that there were no awkward moments. In his speech ahead of the event, Trump chose to tout his administration's work on jobs and the military. “Regulations, low taxes, our country has never done better," he said, per The Hill. "And do we love our military? Our military is literally being completely rebuilt. We are completely rebuilding our military. It was very depleted, as you know.” During the event, Trump also spoke to a group of children on the South Lawn where he brought up his border wall to a young boy, who reportedly told him to "keep building that wall," per The Hill.

"It’s happening. It’s being built now," Trump said to the young children. You know, just casual conversations with young adults during Easter egg festivities. (You can fast forward to minute 30 in the video if you want to see the exchange for yourself.)

For those who aren't familiar with the White House Easter Egg Roll, here's an interesting history lesson. According to the White House website, the tradition was started in 1878 while President Rutherford B. Hayes was president. At first, the roll was meant to be a small, informal gathering, but that year a group of children walked up to the White House gate to ask if they could take part in the festivities as well, which President Hayes allowed and thus the annual White House Easter Egg Roll was born. Since, the tradition has become one of the most anticipated White House events, each year different based on the administration as every first lady adds in their own flair.

In 2018, the Trump administration hosted the 140th annual Easter Egg Roll on April 2, 2018. That day, the Trump family including Ivanka Trump, Donald Trump Jr. Trump, Eric Trump, and Tiffany Trump gathered together to celebrate the holiday alongside thousands of families. In addition to the Easter Egg Roll, attendees enjoyed other festivities such as cookie decorating, egg hunts, and a reading nook from the first lady. To kick off the celebration, President Donald Trump stood next to the first lady and a very festive human-sized Easter Bunny and delivered a truly one of a kind speech.

Not only did he keep referring to the Easter Bunny as "Gary" or "Barry" (which is I guess OK considering they're apparently old friends), but he also gave a special shoutout to the White House preservation staff for keeping the historic building in pristine condition. Trump's speech was only two minutes long, but it definitely was memorable.

Another year, another Easter. Maybe not all of us were able to attend the Easter Egg Roll this year, but enjoy the sugar coma nonetheless.