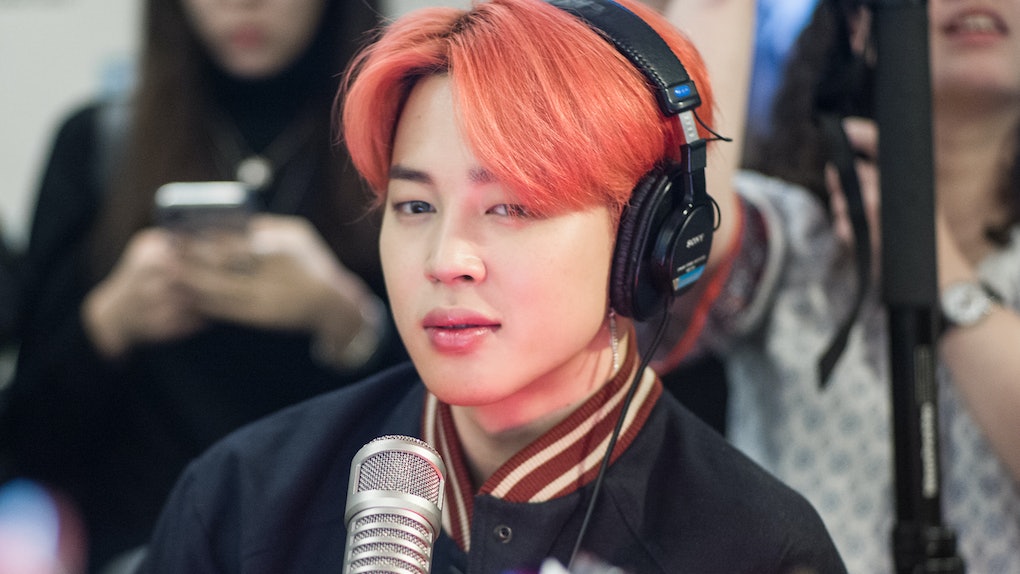 Jimin is making the BTS ARMY swoon. What else is new? The BTS heartthrob tweeted some new photos of himself on Wednesday, Sept. 11, and the photos of BTS' Jimin taking off his shirt in a photo booth are making his fandom lose their minds. And their reactions to his tweet are as funny as ever.

The BTS boys like to tweet photos and videos of what they're doing during their time off to keep fans on their toes. In his most recent tweet, Jimin showed off three photo strips from what looks like a photo booth session he did. In the black-and-white photos, he's wearing a white T-shirt and is goofing around in some of the shots. But in others, he's turning the smolder up to full blast, with one of the three photo strips showing him looking at his shirt, taking it off, then giving a shocked look to the camera once the shirt is off, and then turning it around to put it back on backward.

Naturally, fans are making memes in reaction to this. They're tweeting Jimin's photo next to photos of Bart Simpson falling down a set of stairs, photos of other BTS members crying, videos of people screaming — you know, all of the typical internet sh*t.

Jimin's got the whole fandom shook!

The ARMY can handle none of it.

You really gotta do the fandom like that, Jimin?! They weren't expecting this on this day!

The Jimin fandom has been gifted with lots of Jimin content this week. BTS currently has a documentary series airing (because their Bring The Soul film just wasn't enough, apparently), and in episode three of the series, fans got a look into Jimin and Jungkook's friendship. The two are having dinner in one of the scenes, and during that conversation, Jimin revealed he sometimes cries when he and the other bandmates are going through tough times.

"I came to the hotel and asked for more soju. Then I said I'm really lonely. I kept saying I don't think using separate rooms was a good idea," Jimin said, eventually revealing that he cried about his bandmates at one point.

"Why? Why'd you cry? You like us so much?" Jungkook jokingly asks.

"Not because I like you guys so much, but because you guys were all going through hard times. I was, too," Jimin responds.

"Everyone was telling me not to think too much into it. But in my opinion, we are a team. And we'll be together in the future, so how can I not care?" he continues. "I kept saying, 'That's not a team then'... But they're telling me that because they care about me, so don't be too hard on yourself. I do understand that, but I felt like you can only understand to a certain point, and I cried by myself."

Luckily, he found a way to laugh about the whole situation. "But they said I kept saying this while I was drunk, but I don't remember any of it!" Jimin said laughing. "Then I suddenly played the music I made — the one that only has the melody."

Awww, Jimin! This Bring The Soul docu-series can be viewed on the Weverse app. Although, I'm not quite sure if photos of a shirtless Jimin will be included in the episodes.