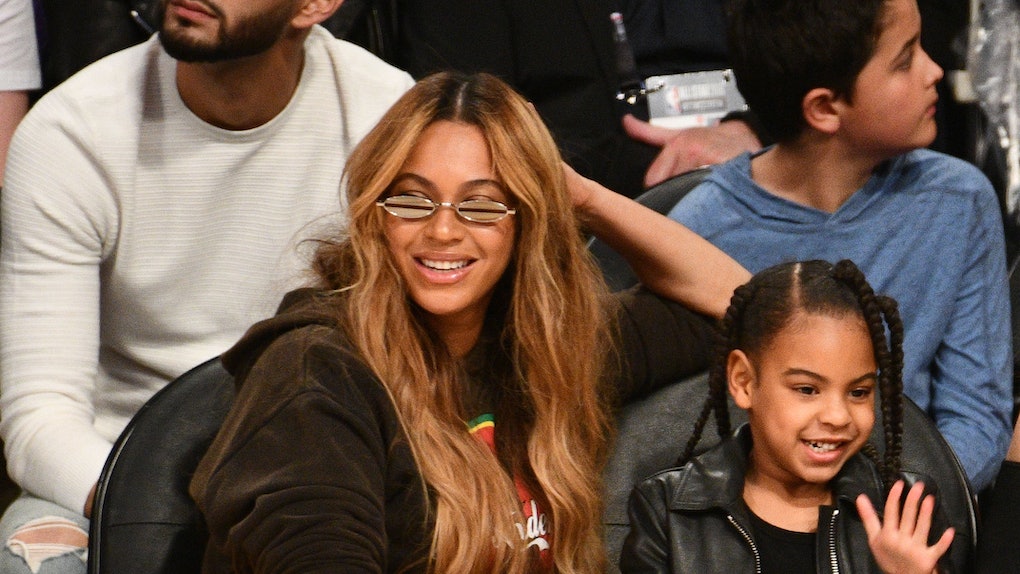 The famous mother-daughter pair showed up at The Lion King premiere hand-in-hand, JAY-Z by their side. They were the true royal family at this event, showing up in all-black outfits. JAY-Z wore an all-black suit, and Bey and Blue wore half gown, half suit getups. It was as amazing as it sounds. Beyoncé's jacket was decked out in silver embellishments from top to bottom. Blue's had silver accents on the shoulders, and the rest of it was black. Their skirts were black tulle with — I would say rhinestones, but it's Beyoncé. They're probably Swarovski crystals or diamonds or some other expensive sh*t. The lion queen spares no expense! Whatever their skirts were decked out in, they both slayed the red carpet.

Bedazzle me, why don't you.

The world, for once, in perfect harmony. (The third person in the picture is Shahadi Wright Joseph, the voice of Young Nala.)

Here we have the two most powerful people in the world: Beyoncé and Bob Iger, the CEO of Disney.

Andddddd one more of Blue Ivy and Beyoncé for the folks at home.

Ya love to see it.

Now that the film has had its premiere, entertainment reporters are able to give their spoiler-free reviews of the remake of the Disney classic (which is really just Hamlet, but with lions).

Adam B. Vary of Buzzfeed News said that Nala's role has been expanded and Beyoncé's vocal acting is great. I mean, naturally.

"Yes, Beyoncé is good in #TheLionKing — really good! Nala’s role is indeed bigger, and Bey suits it perfectly," the tweet read. "There’s a moment when she tells Simba he’s 'disappointed' her, and reader, the way Bey bit the 't' in that word chilled me and thrilled me." Bey did that.

The main takeaway from the film appears to be that it's a stunning feat of animation and a game-changer for the genre.

This is great news for all of the Beyoncé and Lion King stans out there.

The film is set to release on July 19, with tickets already on sale and no doubt, some showings are probably already sold out. The only downside (and it appears to be a small one) is critics feel the lions don't emote very well, but that's got to be a hard thing to accomplish with this kind of true-to-life animation. Hopefully, the vocal acting will make up for that.

Just so y'all know, Beyoncé also curated the entire Lion King soundtrack and released a new single called "Spirit" on July 10 in the lead up to the film's release. The queen hath blessed us again.

More like this
Who Will Play The Fantastic Four For Marvel? Twitter Has So Many Ideas
By Dylan Kickham
Selena Gomez's Horror Movie 'Spiral' Will Be A Dark Look At Social Media
By Cianna Garrison
6 Facts About Mckenna Grace From 'The Handmaid's Tale' & 'Hill House'
By Ani Bundel
Stay up to date