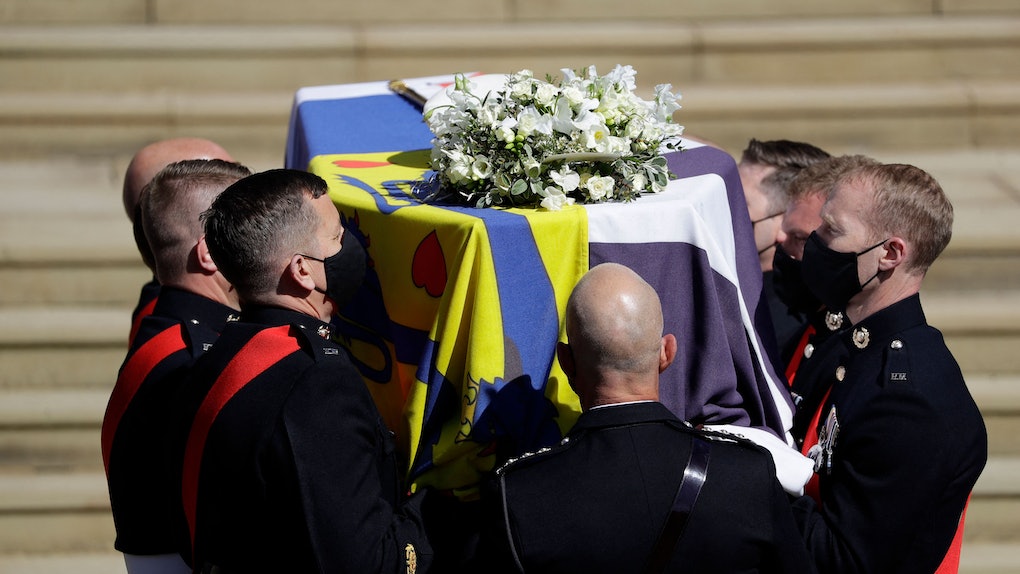 These Photos From Prince Philip's Funeral Capture The Most Touching Moments

Prince Philip’s funeral took place on Saturday, April 17 on the grounds of Windsor Castle. The memorial service honored the 99-year-old Duke of Edinburgh, who passed away peacefully on April 9. To say the service was a hot topic during the week leading up to its occurrence is an understatement. From resurrected rumors about the drama between William and Harry to buzz surrounding Meghan Markle’s decision to stay in the U.S., royal family fans have been bombarded with fresh gossip every day. But now, photos from Prince Philip’s funeral have been released. Drama aside, these images serve as a heartfelt reminder of what’s most important: celebrating the life and legacy of the Duke.

Despite the weight of the situation, the monarchy held an intimate gathering instead of a giant one. The COVID-19 pandemic was the family’s primary reason for having a funeral much smaller than past royal funerals. However, a former Buckingham Palace spokesperson told People that "ironically, it is probably how he would have liked … No fuss, no bother. Right through his life, he never knew what all the fuss was about."

If that’s the case, then Philip would have appreciated how his memorial service turned out; even in these photos, you can tell the funeral was as lowkey as planned.

The funeral procession was small, humble, and touching:

The procession into the chapel was a particularly touching moment:

The modified Land Rover had a special story behind it, as Prince Philip requested his hearse specially. He reportedly told Queen Elizabeth, "Just stick me in the back of a Land Rover and drive me to Windsor," when talking about his funeral arrangements prior to his death.

Inside the chapel, his family members mourned his passing:

After the service inside the chapel, Prince William and Prince Harry walked together for the second procession:

Inside the cars, photographers caught glimpses of the Royal family members:

The loss of the Duke of Edinburgh has been felt around the world. Even though the funeral service was closed to the public, thousands watched the live procession to pay their respects to the late consort of the British monarch.