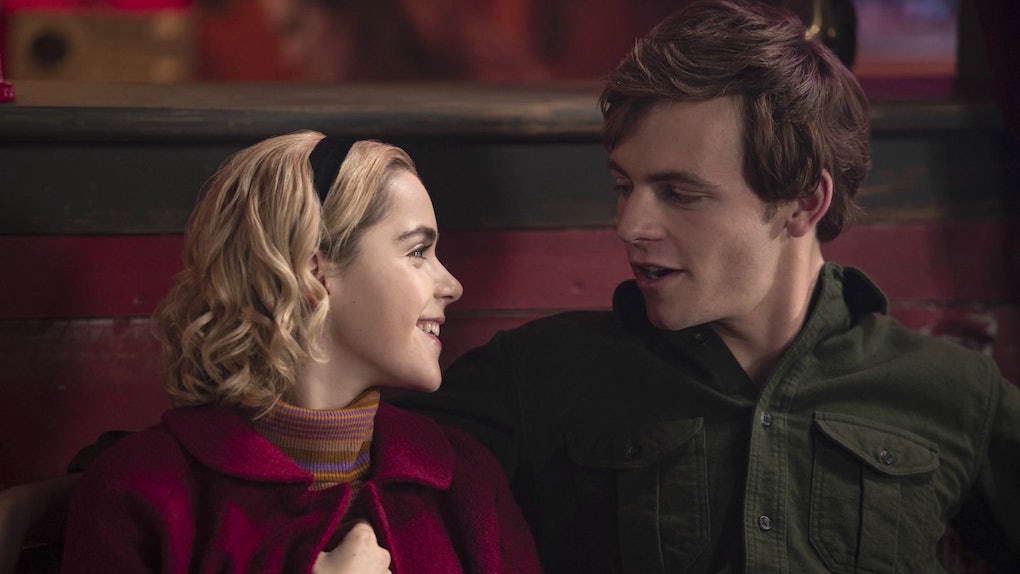 Chilling Adventures of Sabrina may be as "chilling" as its title suggests, but it looks like things are definitely heating up in Season 2. The Netflix series just released some first-look photos of its upcoming season, and it is safe to say that romance will play a major part in the next string of episodes. These new Chilling Adventures of Sabrina Season 2 photos reveal that a love triangle is coming to rock the magical and mortal worlds.

When we last saw Sabrina Spellman, she was really not in the best place romantically. In the Chilling Adventures of Sabrina Season 1 finale, Sabrina signed her name to the Book of the Beast, an act requiring her to fully embrace her witch side, and said goodbye to her mortal boyfriend Harvey Kinkle because of it. In the show's holiday special A Midwinter's Tale, Harvey made it clear that he wants nothing to do with Sabrina's magical powers, basically saying that the two will no longer be speaking to one another going forward.

At the same time that things were falling apart with Harvey, Sabrina also began a flirtation with her warlock schoolmate Nick Scratch. Sabrina and Nick have yet to actually act on their brief flirty moments, but the Season 1 finale did end with Sabrina giving Nick a big wink in the school corridor. Plus, the Season 2 teaser trailer showed Sabrina and Nick getting close on a dance floor, so it looks like Sabrina and Nick will be more of a thing in Season 2.

But Harvey is not out of the picture yet, either. Chilling Adventures of Sabrina shared three new photos from Season 2 that show Sabrina going in for a kiss with both Harvey and Nick. Hello, love triangle!

Harvey and Sabrina may be on the outs right now, but that photo of them certainly makes it look like they are going to make up in the new season. But their relationship will have some competition with Sabrina's new fling with Nick, it seems.

This love triangle element actually closely mirrors the main conflict that Sabrina faced in the first season of the show: a forced decision between her mortal side and her witch half. Except this time Sabrina will have to choose between the mortal boyfriend who has made it clear that he is uncomfortable with magic, and the warlock boyfriend who has been shown to be incredibly invested in the dark arts.

Thankfully, fans will not have to wait too long to see this love triangle in action. The new season is set to premiere on Netflix in just a month. Technically, these nine new episodes are being released as the conclusion to Season 1 rather than a new season, which just means that there is even more Chilling Adventures of Sabrina for fans to look forward to in the future. The teen horror series has already been renewed for four seasons, and Season 1 has technically not even finished airing yet. Look for the Season 1 conclusion to drop on April 5.