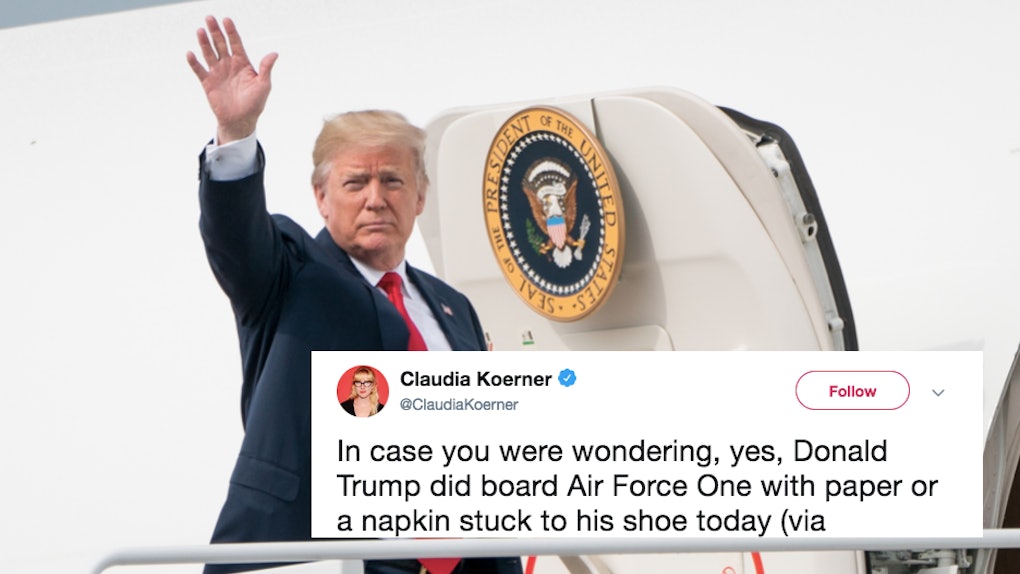 No matter how popular you were in middle school, you've probably endured the sheer humiliation of having toilet paper stuck to your shoe, at some point or another. Let's face it: this happens to pretty much everyone. Hopefully, one of your friends was able to point it out before you left the school bathroom, or wherever. Anyway, it seems like President Donald Trump didn't have any pals in the vicinity to help him out when he apparently had some paper stuck to his shoe. The resulting memes of Trump with paper stuck to his shoe while boarding Air Force One are straight-up hilarious. Seriously, these are pure gold.

On Thursday, Oct. 4, President Trump had a little extra baggage on his person while he was boarding Air Force One, per BuzzFeed. The President had what looks like a piece of paper or a napkin (possibly toilet paper?) stuck to the bottom of his left shoe. Elite Daily reached out to the White House for comment but did not hear back at the time of publication.

Luckily, an ingenious onlooker was nearby to capture the moment. I'm not exaggerating when I say the moment is absolutely glorious, and the best part is that he had just emerged from a limo full of people. So, it appears that nobody bothered to inform him of his, um... possible paper trail. Needless to say, the video is super funny (and a little cringey). It was tweeted by BuzzFeed reporter Claudia Koerner, which you can see below.

With this highly valuable footage, Twitter did what it does best, and proceeded to make a ton of really fantastic memes about it. Some of these remixed videos have really fantastic music played over them, while others are paired with some nasty sound effects. Each and every one of them is absolutely perfect in its own individual way, and if you haven't already watched them, you definitely should — I can guarantee you won't regret doing so.

OK, Twitter seriously came in clutch with these hilarious vids... I really needed this. Each and every video is absolutely amazing, and honestly, I'm kind of considering making one with, like, Nickelback playing over it. Don't fight me on this, it'll be perfect, and you know it.

Anyway, others just had some really funny things to say about it. I mean, it's not like something as juicy as this can go unscathed without a sarcastic comment or anything.

LOL. I seriously can't handle these.

Anyway, if you're quite not feeling enough second-hand humiliation from the toilet paper incident, feel free to revisit the time a few weeks ago, when Trump was discussing the significance of Hurricane Florence. The POTUS not-so-eloquently stated, "This is a tough hurricane, one of the wettest we’ve ever seen from the standpoint of water." Uh, I'm sorry, what was that he just said? Wettest from the standpoint of water? Is President Trump shocked by the amount of water that comes from a hurricane? IDK guys, I'm actually speechless. Regardless, people totally roasted him for this, and if you weren't one of them, I'm kind of judging you.

Well, once again, it looks like the POTUS has made yet another "oopsie." Whether it is in fact toilet paper on his shoe, or if it's just a napkin (or other piece of paper), Trump's security really should have said something to him to avoid that grade-school embarrassing moment. Er, actually, I think it's best that they didn't mention it. This is some really, really quality content.