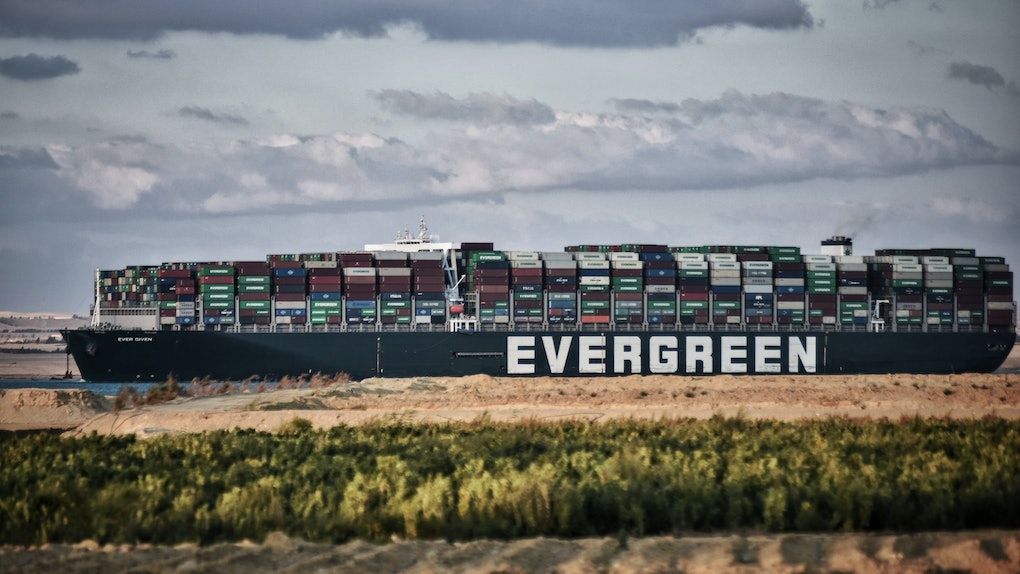 After nearly a week of keeping the internet (and the global economy) on edge, the Ever Given, a cargo ship that's been lodged in Egypt's Suez Canal, is finally free. Twitter is having a field day, of course, but for a pretty unexpected reason. These memes about "putting back" the Ever Given in the Suez Canal are everything you're feeling, and it's weirdly comforting to know we're all in the same boat — ba-dum-tsss.

On March 29, salvage crews finally dislodged the 200,000-ton cargo ship that's been causing the now-notorious traffic jam in the Suez Canal after six days of nonstop struggle. The ship first got wedged diagonally in the canal on Tuesday March 23, during an intense dust storm that lowered visibility. The blocked canal was a disaster for global trade — per NBC News, about 12% of the world's trade goes through the canal.

Even with the ship free, clearing nearly a week's worth of backlogged cargo transports will take time. As of Monday morning, more than 350 ships were backed up and waiting their turn to traverse the canal. Twitter, however, is taking no time at all in releasing a flood of memes instructing officials to "put it back." Why? While some users are mourning the loss of a sense of unity over a common cause, the majority are just sad to see the steady flow of funny memes trickle to an end.

The mammoth Ever Given single-handedly cost the global economy billions of dollars, heightening oil prices and backlogging cargo transports for days. For some Twitter users, it seemed ludicrous that something that seemed so trivial, like a blocked canal, could disrupt the world economy so dramatically. Many offered simple solutions, like cotton swabs and common sense.

In a world where everyday citizens are expected to pick up the slack for megalithic corporations and solve global issues like climate change and racial injustice, it admittedly felt a bit nice to sit back and watch the big boys work this one out — and to enjoy some quality memes in the meantime. Sadly, all good things must come to an end: The ship sails on, and Twitter will, in all likelihood, find another cause to rally around. Maybe next time it'll be a stuck cargo train? Who knows, honestly.

More like this
These Tweets & Memes About Matt Gaetz's Venmo All Make The Same Joke
By Cianna Garrison
The More Contagious B-117 COVID Variant Is Now The Most Common Strain In The U.S.
By Rhyma Castillo
Universal Studios Hollywood's Ticket Restrictions For April 2021 Include Major Limits
By Cianna Garrison
Stay up to date