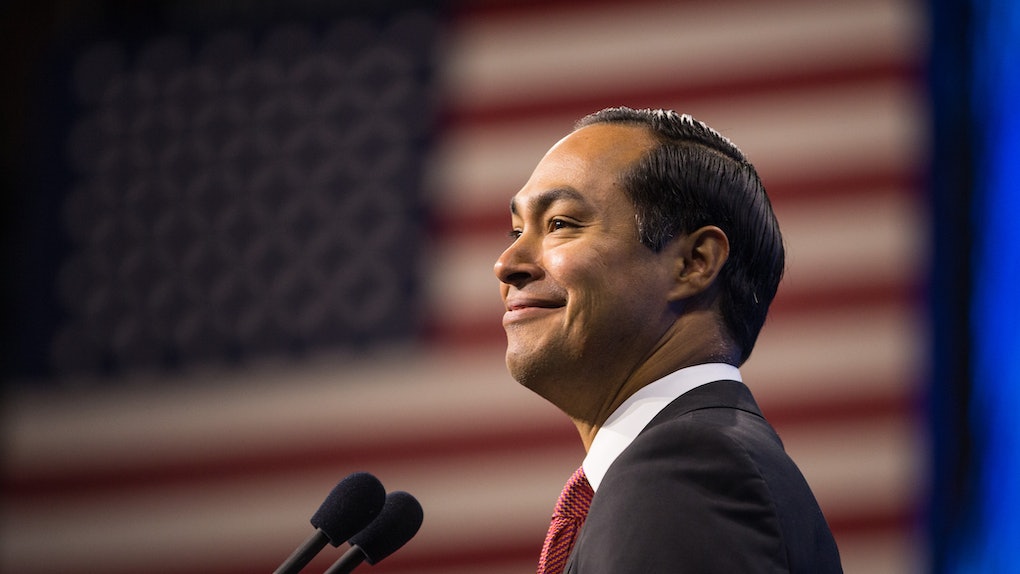 These Memes About Julián Castro Slamming Joe Biden At The Sept. 12 Debate Are So Brutal

It's the time for the next Democratic debate, so I hope everyone has their popcorn ready. Now that this debate is down to (thankfully) one night, and only ten candidates are taking the stage, it's safe to say that tensions are heating up. Don't think so? Check out these memes about Julián Castro slamming Joe Biden at the Sept. 12 Democratic debate and see for yourself. I smell drama.

It feels just like yesterday when over 20 Democrats were in the running for the 2020 presidential election. Well, now for the September Democratic debate, the race is down to only ten (at least, on the debate stage). The first two debates had to be stretched into two separate nights due to the large number of presidential candidates, but finally that's not the case any longer. On Thursday, Sept. 12, remaining Democratic candidates on the stage included: former Vice President Joe Biden, Sen. Elizabeth Warren of Massachusetts, Sen. Bernie Sanders of Vermont, Sen. Kamala Harris of California, Sen. Amy Klobuchar of Minnesota, Sen. Cory Booker of New Jersey, former U.S. Rep. Beto O’Rourke of Texas, Mayor Pete Buttigieg of South Bend, Indiana, former U.S. Secretary of Housing and Urban Development Julián Castro, and entrepreneur Andrew Yang, who all took the stage to square off amongst one another.

The debate started off with the controversial subject of health care coverage, and every candidate had an opinion to share. Well, once it was time for Castro to speak on the issue, he addressed Biden about his solution. While speaking, Castro called out Biden for stating the public would have to "buy in" if they chose to keep private health insurance. Immediately, Biden denied Castro's claim that he stated individuals would have to "buy in" for his plan. From there, things got... tense. As Biden continuously denied using that phrase, Castro questioned Biden about his memory.

You can watch the full video below.

The Democratic presidential race is one of the most anticipated events of 2019, so obviously Twitter was ready to share their thoughts on his heated exchange between the two candidates. Needless to say, the memes did not hold back.

However, Castro didn't stop there. As the two candidates battled it out, Castro boldly claimed that he was "fulfilling the legacy of Barack Obama" and continued to claim that Biden "was not." Well, Biden delivered a response that was short and to the point.

"That'll be a surprise to him," Biden responded.

While some people loved Castro's comments, other social media users believed Castro's words were out of line.

As awkward as Twitter might have felt watching this exchange, just imagine how the other eight candidates on stage felt. As Biden and Castro continued their debate, candidate Buttigieg interrupted the two men and condemned them for the heated exchange. "This is why presidential debates are becoming unwatchable," Buttigieg said. "This reminds everyone of what they cannot stand about Washington."

However, Castro countered Buttigieg's remark with a matter-of-fact point.

Politics isn't always fun and games. In fact, judging by this debate, it doesn't look fun at all.

It feels just like yesterday when we were gearing up our TVs and streaming services for the very first Democratic debate on June 26, and now we're already in September. Don't touch that dial folks, because things are only going to get more interesting.