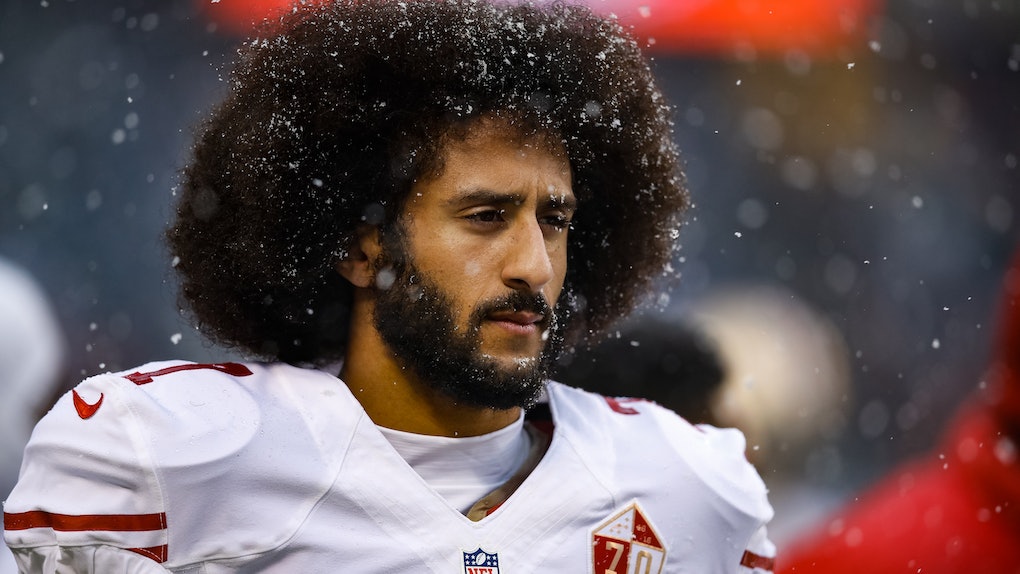 I think we all can agree that 2018 has been a rather, um, challenging year. But one thing that has been getting me through it has, hands-down, been the hilarity that goes down on social media, from wild tweets to chaotic memes. The latest topic that social media users have spun into internet gold is Colin Kaepernick's Nike ad. The memes about Colin Kaepernick's Nike ad might even be the best thing to go down online thus far.

If you somehow missed it, on Wednesday, Sept. 5, Nike announced that the former San Francisco 49ers quarterback — who has been widely criticized for kneeling during the national anthem to highlight racial injustice — would be one of the faces to help celebrate the 30th anniversary of the brand's iconic slogan "Just Do It." Kaepernick's ad, specifically, features a close-up of his face and ad copy that reads, "Believe in something. Even if it means sacrificing everything."

The polarizing ad captured the attention of many, who didn't waste any time creating their own hilarious versions of the ad and sharing them on social media.

One person recreated the moment with Dwight from the hit comedy The Office and it's absolutely perfect.

People can't stop laughing at the meme of Dwight's boss, Michael Scott, either.

Here's another one that Marvel fans will appreciate.

And these, in case you forgot how undefeated the internet is:

Donald Trump Jr. even hopped in and recreated the photo with his father, President Donald Trump...

...But Stephen Colbert's version is arguably a lot funnier.

The Mariah Carey/J.Lo drama also got tossed in, because it honesty goes with everything.

And then this one came in for the kill: someone referenced Kanye West's infamous slavery comments, in which he claimed it wasn't a "choice" during a May interview with TMZ to immediate and widespread backlash. He has since apologized and clarified his statement.

Aside from all the jokes, there was seemingly a pretty solid message behind Kaepernick's Nike's ad. In a video shared to Twitter by both the former NFL player and Nike on Wednesday, Sept. 5, Kaepernick explained:

If people say your dreams are crazy, if they laugh at what you think you can do, good. Stay that way. Because what nonbelievers fail to understand is that calling a dream crazy is not an insult; it’s a compliment.

Don’t try to be the fastest runner in your school, or the fastest in the world. Be the fastest, ever. Don’t picture yourself wearing OBJ’s [Odell Beckham Jr.] jersey; picture OBJ wearing yours. Don’t settle for homecoming queen or linebacker; do both. Lose 120 pounds and become an iron man, after beating a brain tumor. Don’t believe you have to be like anybody to be somebody.

Though I thought there couldn't be anything more exciting than this Kaepernick ad, these memes are truly the icing on the cake. Ah, internet, never change.