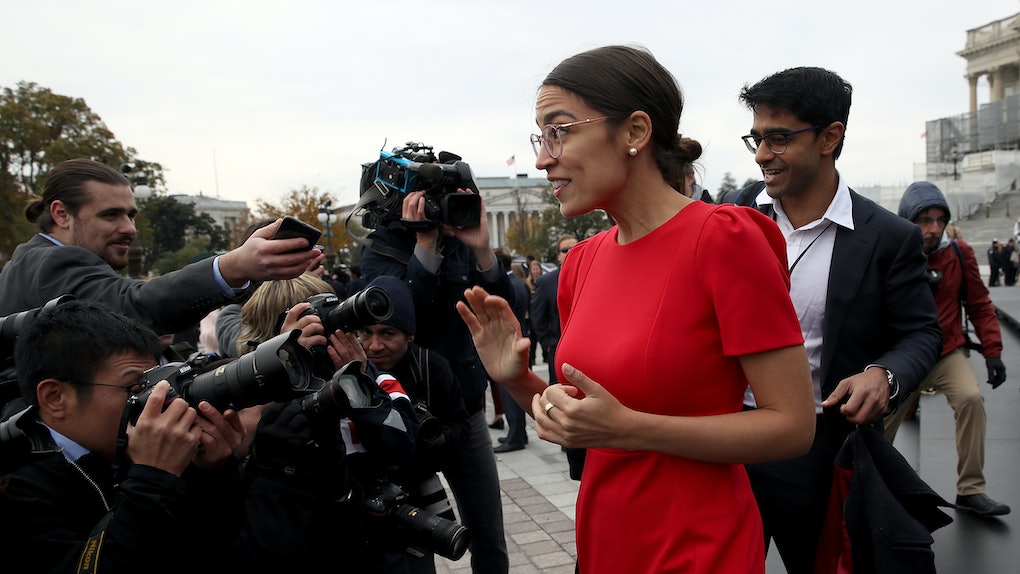 Ahh, a classic tale of when trash-talking goes wrong. On Thursday, Nov. 15, reporter Eddie Scarry took aim at Alexandria Ocasio-Cortez, suggesting that the congresswoman-elect, who recently opened up about her financial difficulties, wasn't actually "struggling" — based on the jacket she wore to her orientation to Congress. Unfortunately for him, Twitter users swept to Ocasio-Cortez's defense, pairing Scarry's comment with hilarious photos to roast the comment. Honestly, these memes about Alexandria Ocasio-Cortez's jacket will make you so proud.

Scarry started it all by sharing a photo of Ocasio-Cortez's backside to Twitter that an unnamed Capitol Hill "staffer" sent to him (first of all, who does that?). The pic, which appeared to be taken without Ocasio-Cortez's knowledge, showed the congresswoman-elect from behind, walking down a hallway wearing a black suit skirt and jacket, with a winter coat draped over her arm. He captioned the photo, "Hill staffer sent me this pic of Ocasio-Cortez they took just now. I'll tell you something: that jacket and coat don't look like a girl who struggles." He seemed to be referring to an interview she gave to The New York Times on Nov. 7 in which Ocasio-Cortez said that she can't afford rent in Washington D.C. until her term starts in January, when she can start collecting a salary. While many people loved how relatable her comment was, many conservatives have since been trying to discredit her claims, digging for any and everything to poke holes into her story. They've posted photos of her childhood home, and Fox News host Ed Henry accused her of wearing "multi-thousand-dollar outfits" in a photo shoot for a magazine.

But this time, people aren't letting it go so easily... especially since she's honestly wearing very normal clothes in the photo. What does he think people would wear to go to Congress?

Once the backlash started, Scarry quickly deleted his tweet and later posted an apology saying that he meant the tweet as a compliment, but not before Ocasio-Cortez captured it and shared it to her timeline. "Oh, does [Scarry] think he can delete his misogyny without an apology?" she captioned the post. "I don’t think so. You’re a journalist - readers should know your bias."

And the memes have been rolling in since.

Others mocked him mercilessly.

"It's the same pair of shoes she wore when protesting the other day," political strategist Cheri Jacobus wrote.

Ocasio-Cortez herself even pushed back at the comment, writing that people would criticize her no matter what she wears:

"Dark hates light - that’s why you tune it out," she added. "Shine bright & keep it pushing."

At that point, Scarry seemingly realized he'd been absolutely owned and all he could do was apologize. In a tweet shared on Thursday evening, he said that he was actually complimenting Ocasio-Cortez, saying she looked "well put together" and "elegant." The tweet read: "[Attention]! I posted a tweet earlier suggesting the incoming congresswoman looked well put together -- ELEGANT even -- despite suggestions she’s struggled. The tweet was taken as something else, so I’ve deleted it!"

Some key advice for future reference, though: don't post pictures of unsuspecting women, and if you wanna get really wild, maybe avoid judgmental comments about what they're wearing, too. In fact, it might just be best to avoid making any comments at all — compliment or not. Just saying.