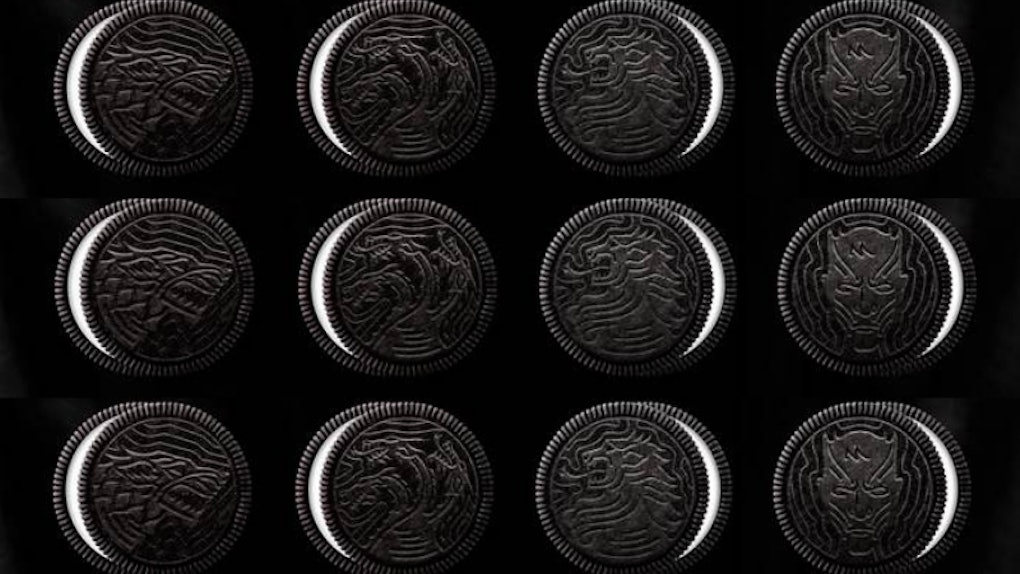 It's April, which means that the countdown to the eighth and final season of Game of Thrones is getting real. When the first episode of the highly-anticipated finale debuts on April 14, viewers will watch their favorite characters vie for a seat on the Iron Throne and seal their fates. If you're looking for a go-to show snack that'll help you munch away the stress of the final series, these limited-edition Game Of Thrones Oreos have your name (or rather, your house) written all over them.

Rumors first started swirling that the cookie company would be collaborating with HBO on a specialty themed offering back in February. In a Feb. 24 Instagram post, Oreo teased a crossover that even Cersei Lannister would want to get on board with via a video that teased that "cookies are coming."

However, while original reports seemed to suggest that Throners would just be OG Oreo cookies in some cool revamped packaging, an Oreos rep confirmed to Elite Daily that the reality is way cooler. Prepare to treat your tastebuds to the mother of all TV watching snacks, because these limited-edition wafers come with four different designs that are inspired by the major players still duking it out for the Iron Throne.

The GOT Oreos come engraved with the insignias of House Lannister, House Targaryen, House Stark, or that of the Night King, depending on who you think will emerge as the victor in the end. In addition to rooting for team chocolate wafer or team icing with every bite, Oreo stans can also pledge their loyalty to their house of choice by visiting Oreo's website or the company's Facebook and Twitter accounts and using the hashtags #GameofCookies and #ForTheThrone.

According to press materials, fans who participate will be randomly picked throughout the season to win a "special treat," which I'm guessing is something Oreo-related.

Oreo is launching these Game of Thrones cookies on Monday, April 8, which means you have just under a week to stock up for your viewing parties. Per press materials, you can only declare your allegiance for House Stark or House Targaryen while supplies last, so I'd recommend going on a snack run sooner rather than later to make sure you have the ultimate GOT viewing party spread come April 14.

In the meantime, you'll want to check out Oreo and HBO's imagining of the now-iconic opening credit sequence from Game of Thrones — but in wafer form. I mean, I thought the designs on the new Game of Thrones Oreos were intricate, but I am completely blown away by the still of an "animated landscape built entirely out of 2,750 Oreo cookies." All that's missing is the GOT opening sequence music playing in the background. Trust me, diehard Throners will definitely want to geek out over this creation.

Again, these on-theme Oreos will only be available "while supplies last," so I'd recommend getting your snacks run out of the way ASAP after they're released next Monday. Come April 14, you'll definitely want a sheet or two of these goodies to munch on while you watch the biggest Game of Thrones' players duke it out for control of Westeros.