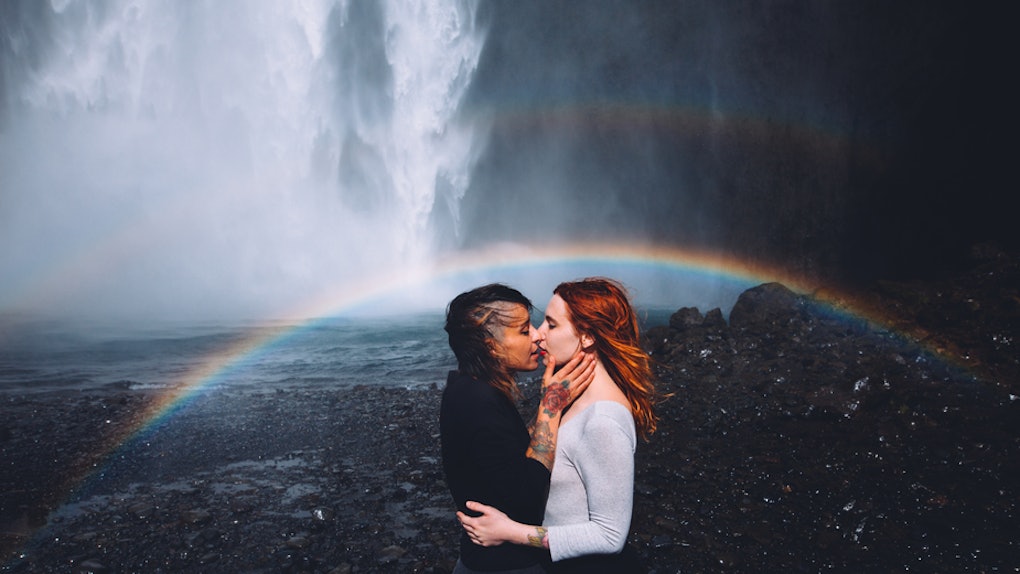 These Lesbian Couples Shared Their Proposal Stories & They're So Beautiful

I, like all humans with a heart, love a good proposal story. In addition to weeping over strangers' wedding videos and stalking wedding photographers' Insta feeds, I'll often scour the internet in search of gorgeous engagement stories. And these lesbian couple proposals are among the loveliest I've ever heard or read.

(BTW, have you seen that video of two women proposing to each other at the same time? It's perfect in every way.)

When it comes to same-sex proposals, though, there seem to be a lot of misconceptions. A quick Reddit search turns up multiple threads asking if the partner who plays "the man" in a relationship typically pops the question. Which, as the gentlemen of Queer Eye have explained, is a pretty problematic — and sexist — way of thinking. There's no "man" in a relationship between two women.

(Also, while we're at it, can we all just agree that waiting for guys to propose in heterosexual relationships is silly? If you want to propose, you should propose!)

That said, as an outsider to the LGBTQ+ community myself, I wasn't sure whether there was protocol around who asked when. Did most couples talk through who might propose ahead of time? Did both partners get a ring?

I spoke with a few married women (and browsed a few of those aforementioned Reddit threads) to learn more, and got to hear some gorgeous proposal stories in the process. Here's what three women had to say about how they got engaged. Fair warning: You might need the tissues for these, guys.

These women proposed to each other in the most magical way.

I'll be married in three months. My future wife and I proposed to each other. Originally FW said she was going to do a traditional proposal to me, but we had talked about it so many times and marriage was such a given that I thought that was just silly, and I was tired of waiting. I would say I was the one pushing everything forward. If I hadn't, she would have made it happen but it would have taken her a long time. So we picked out rings together, and on our anniversary hiked to a beautiful, secluded spot and proposed to each other. She was nervous so I went first. It was way more meaningful than I expected seeing how it wasn't a surprise in any way. We were in a happy trance the rest of the day and went out to eat and then just cuddled.

For reference, FW is the more masculine one on the outside - she wears boyish clothes, is really athletic, taller than me, etc while I am super girly. However in a lot of ways I have more masculine traits - I tend to rely on logic more while she is more "emotional," I pretty much plan our lives, take care of the bills, am more assertive and aggressive, etc. She will be staying home with our kids when we have them and does most of the cooking and all of the cleaning. (Hopefully this will change when I get a better schedule going, I'm just crazy busy right now.) We definitely balance each other out. If we had to pick, she's 'the man,' but I don't really think of us like that.

This Woman Popped The Question With A Cake.

I'm bi-sexual, and my wife is a Lesbian. Even though we'd had a lot of discussions about getting married, I think for a while she wasn't sure that I was ready, so she was nervous to pop the question. Which is why I decided to ask her myself.

I surprised her one day after work by filling our house with flowers and lighting a bunch of candles and baking a cake that said, 'Will You Marry Me?' in icing. It was really cute, if I say so myself.

She was so surprised, and so excited. We went ring shopping together the next day and picked out our engagement rings and wedding bands together, which we both wear. We both wore wedding gowns when we got married as well. It was all perfect. She's perfect.

This Woman Plans To Propose To Her Partner To Show That She's Definitely Ready For Marriage.

It's interesting how engrained our cultural scripts are that it genuinely confuses people when they are confronted with a situation that, by its nature, exists outside of the script. I've been with my partner for 3 years (we're both women), planning on proposing when I am finished with law school. It will likely be that I propose to her for two main reasons:

1. I'm several years younger and have expressed concerns over not being ready to get married, while she feels she is. 2. My proposal to her will "signal" my readiness.

She cares more about the ring than I do. Seeing women wearing engagement rings irks me on some level, so I would be uncomfortable wearing one. But she wants one, so I'ma put a ring on it anyway...

More like this
Zac Clark & Tayshia Adams Are Wedding Planning & I’m So Pumped
By Lydia Wang
When Are Ariana Grande & Dalton Gomez Getting Married? Here's The Reported Tea
By Corinne Sullivan
Zoë Kravitz's Instagram With Taylour Paige Shows Them Looking So Happy Together
By Candice Jalili
Stay up to date