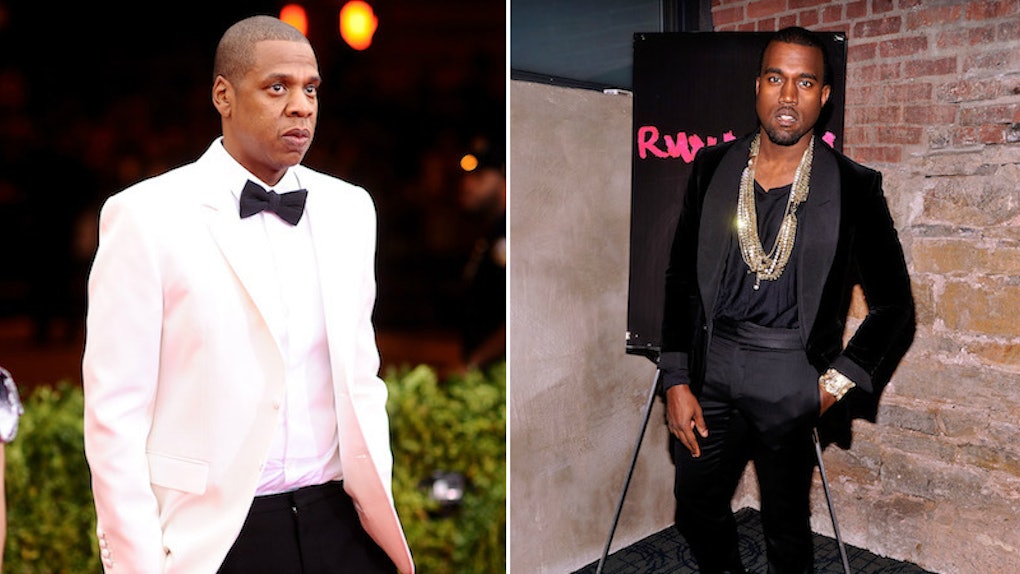 These JAY-Z Quotes About Kanye West Are All About Brotherly Love, So There's No Bad Blood

If you have a sibling, then you know how sometimes it can be very difficult to get along. It's just so damn easy getting on each other's nerves when you are so close to someone. And apparently, the beef between JAY-Z and Kanye was all chalked up to a case of sibling rivalry. In an interview with David Letterman on his new Netflix series, My Next Guest Needs No Introduction With David Letterman, Hov talks about Mr. West, and let me tell you, these JAY-Z quotes about Kanye West are all about brotherly love, and I am LIVING for it.

Letterman brought up the topic of Yeezy, asking JAY-Z, "Kanye West... are we friends?"

JAY-Z asks Letterman if he's ever had a falling out with a sibling. "I'll let you know when it's over," Letterman said. JAY-Z laughed and responded, saying, "It's like that. That's still your sibling forever."

I've watched Kanye from without an album. The thing that I respect about him is that he's the same person. Like, he interrupted our studio session, stood on a table and started rapping. And we were like, 'Could you please get down?,' and he was like 'No, I'm the savior of Chicago!' He didn't have a record.

In the past, JAY-Z and Kanye West have feuded over many things, most notably when Kanye brought up Beyoncé in his rant on stage at the Sacramento stop of his Saint Pablo Tour in November of 2016. During part of his rant, he said,

Beyoncé, I was hurt because I heard you said you wouldn't perform unless you won video of the year over me and over "Hotline Bling." In my opinion... Now don't go trying to diss Beyoncé. She's great. Taylor Swift is great. We are all great people. But sometimes, we be playing the politics too much and forget who we are, just to win.

JAY-Z spoke about the ordeal in August of 2017 to the Rap Radar podcast, explaining that he was hurt that 'Ye would bring his family into the mix. He said,

You can't bring my kids, my wife into it. Kanye's my little brother...But you brought my family into it, that's a problem ... You know it’s a problem because me and him would have been talked about it, been resolved our issues. And he knows he crossed the line, he knows. And I know he knows. Because we’ve never let this much space go between one of our disagreements and we’ve had many. It's a part of who we are... He’s an honest person and he’s wrong a lot of times.

Can't even blame him, TBH.

And for a time, it seemed like perhaps the two "brothers" were simply going to part ways moving forward. Luckily, we now know that, just like ordinary families, sometimes you just get on each other's nerves, but once you each get some space, things sort themselves out. (Hallelujah.)

So, it looks like we've come back to a time where JAY-Z and Kanye West are cool with each other, which I'm eternally thankful for, because that means the world will get to see more moments like this:

And last but certainly not least, this:

That's right, you two. Ride off into the sunset together like the happy siblings you are. Things finally feel right in the world again.

More like this
These Songs About Loving Yourself Need To Be On Your Playlist
By Michele Mendez
These Tweets About Taylor Swift's "Mr. Perfectly Fine" All Ask 1 Important Question
By Sydney N. Sweeney
Chrissy Teigen's Quotes About Giving Up Dieting Are So Refreshing
By Brandy Robidoux
Stay up to date