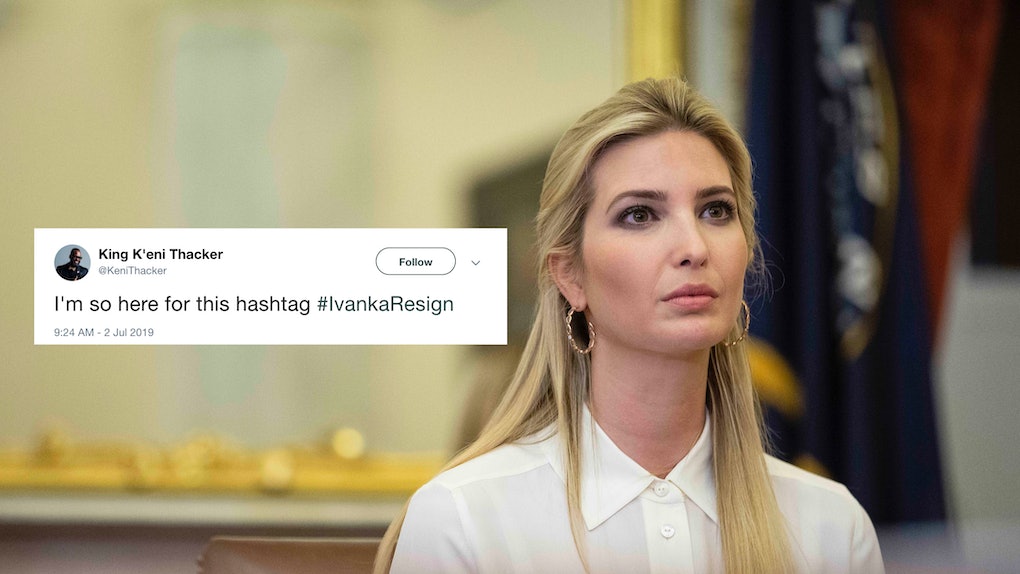 Ivanka Trump has been the target of a considerable amount of criticism since her father, President Donald Trump, took office as president and gave her an official White House position as his advisor. During his time in office, Ivanka Trump has attended quite a few important meetings with world leaders, gotten high level security clearances, and even worked to develop economic initiatives. But not everyone is thrilled about Trump's role in the White House, especially because the first daughter had no prior political experience ahead of President Trump's election, and people are taking to Twitter to air their concerns. These "Ivanka Resign" tweets are all about people being fed up with the first daughter.

On Tuesday, July 2, the hashtag #IvankaResign started trending on Twitter, where dozens of people criticized the first daughter for her White House role. The hashtag's popularity grew just a few days after Trump's participation in the 2019 G20 Summit in Osaka, Japan, was called into question, particularly after the Instagram account for the French Presidential palace released a video showing Trump trying to interject herself into the conversation of world leaders, including French President Emmanuel Macron, UK Prime Minister Theresa May, Canadian Prime Minister Justin Trudeau, and Chairwoman of the International Monetary Fund (IMF) Christine Lagarde. The deeply awkward video raised new critiques of the first daughter, with many wondering why — given her lack of experience — Trump was qualified to be at the international summit.

In a statement to Elite Daily on July 1, White House Deputy Communications Director Jessica Ditto said, “It is sad but not shocking that the haters choose to attack Ivanka Trump, a senior advisor to the President, when she is promoting U.S. efforts to empower women through strategic partnerships with world leaders."

Despite White House officials such as Ditto and Press Secretary Sarah Huckabee Sanders coming to Trump's defense, the Twitterverse has its own opinions about Trump's G20 Summit participation and her general involvement with the U.S. government.

Many people pointed out that Trump has no qualifications or credentials to represent the United States at events like the G20 Summit.

Other people pointed out that nepotism is the only reason she's in the White House and that being the president's daughter shouldn't count as a job qualification.

Some people, such as Twitter user @HarrisonSmith85, asked how she could possibly resign when no one exactly knew what she did in the first place.

Some Twitter users who hopped on the #IvankaResign bandwagon also told her to take other White House officials with her, such as President Trump himself or her husband Jared Kushner, who also serves as an adviser to the president.

Although Rep. Alexandria Ocasio-Cortez (D-New York) didn't hop on the #IvankaResign train, she did tweet a response to Trump's participation in the G20 Summit, writing, "It may be shocking to some, but being someone’s daughter actually isn’t a career qualification. It hurts our diplomatic standing when the President phones it in & the world moves on."

In March 2019, former White House Ethics Chief Walter Shaub compared Trump and Kushner's security clearances to the college admissions scandal, opining that there was "quite the parallel" between people allegedly cheating to get their kids into college and President Trump allegedly using his pull to get his daughter and son-in-law security clearances. The only difference, he noted, were the "national security risks" involved with the latter. The president has denied playing a role in securing Trump and Kushner's security clearances. The White House did not respond to Elite Daily's request for additional comment.

Although the #IvankaResign hashtag will likely have no impact on Trump actually resigning, it's an important indicator of where how the public feels of the POTUS' daughter. Trump has yet to respond to the trending hashtag.