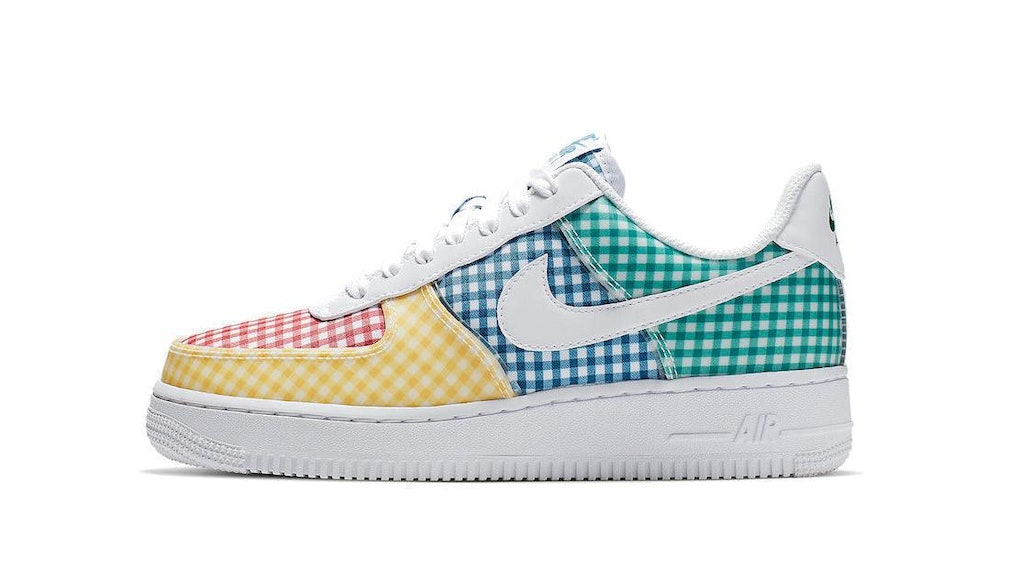 There are certain fashion pieces that just scream spring like floral dresses, white jeans, anything pastel, and lightweight cardigans. And now, there are shoes to add to the list. A pack of gingham Nike sneakers has just been announced and while its release date is still TBD, it should be available to shop very, very soon. Both Nike's iconic Air Force 1 and Cortez styles have gotten a distinctly seasonal update, which is all kinds of unexpected and undeniably cool. Spring has sprung — and so have some of the most covetable sneakers of the year.

Gingham has been somewhat of a sartorial mainstay since the late '50s and '60s (Brigitte Bardot wore a pink gingham dress when she married actor Jacques Charrier in 1959) but it's experienced an especially notable surge in popularity over the past handful of years. Michael Kors, Prada, Derek Lam, Oscar de la Renta, and more have all been champions of the trend, mixing it with unexpected prints or saturating it in unique hues. No matter how it's styled, gingham always boasts a crisp, sweet feel that embodies the vibe of spring and when translated into footwear form, it's fresh as heck. Peep the new Nike sneakers and you'll see what I mean.

The new styles were announced in two waves, with news of the Air Force 1 designs dropping first. Arriving in two color ways, the sneaker gets one uber bright update and another that's decidedly muted.

The first iteration boasts four colors of gingham: sunshine yellow on the toe, cherry red on the toe box, sapphire blue on the saddle of the upper, and kelly green on the heel. Together, the shades create a color blocked delight. A white Nike swoosh, white sole, white laces, and white heel detail finish off the look with a super clean feel.

The other Air Force 1 style is set to arrive in a decidedly more neutral fashion, with a light brown gingham covering its entire upper. It's sole, swoosh, and laces are white. This style is a subtle way to rock spring's most classic trend but remember — subtle doesn't mean boring, especially in this case. Both Air Force 1 styles are set to retail for $130.

The other half of the pack centers on the Nike Cortez style and as with the Air Force 1 styles, it offers one colorful option and one neutral option.

The brighter style boasts a sapphire blue gingham upper and kelly green gingham heel detail, with a streak of yellow shooting through its white sole. A white swoosh and white laces round out the shoe. Because of the lack of red on this style, it's slightly less vibrant than the Air Force 1.

The neutral Cortez boasts the light brown gingham over its entire upper, with a white swoosh and white laces finishing it off. For a super sweet touch, the edges of the white leather eyestay boast a zig-zag design.

To snag a pair, keep your eyes peeled at nike.com.