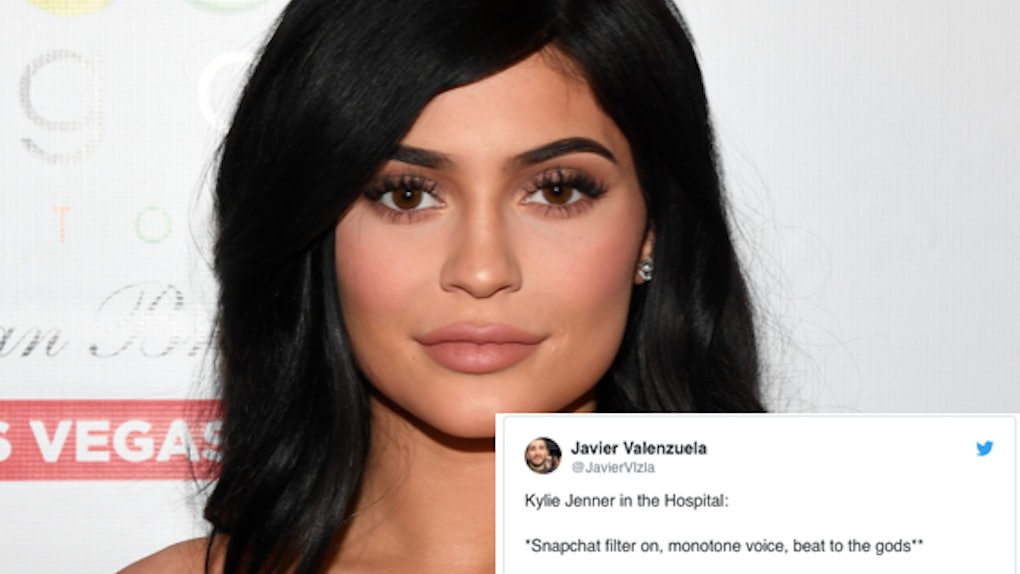 These Funny Tweets About Kylie Jenner In Labor Are Absolutely Hilarious

Guys, there's so many rumors surrounding Kylie Jenner that I can barely keep up at this point. (See what I did there?) Back in September, reports first surfaced that Kylie Jenner was expecting her first child with her boyfriend, Travis Scott. Now, though those rumors have never been confirmed, there's a rumor on top of the rumor that Kylie Jenner is in labor. Elite Daily reached out to Kylie Jenner's team for confirmation of the rumors on Twitter, but did not hear back by time of publication. However, TMZ has reported that the rumor is definitely not true. Twitter took this rumor and ran, though, and now we have some hilarious tweets to keep us occupied while we wait for the news as to whether Jenner is actually giving birth to a child at the moment. These tweets about Kylie Jenner in labor are the funniest things you'll read today.

On Friday, Jan. 12, reports first surfaced on Twitter that Jenner was reportedly at Cedar Sinai Medical Center in Los Angeles. From what we know about Jenner's reported pregnancy, she would be due around February. But, because we barely know anything, this could be totally wrong. Or, we could be REALLY wrong and Kylie Jenner isn't even pregnant. Who knows?! TMZ says while the rumors surfaced online, they have confirmed that Jenner is not in labor and is not due this month. She also hasn't gone into premature labor, the report says.

Jenner has been so secretive about her reported pregnancy, so it does make sense that if she was pregnant, we wouldn't know until she gave birth. A few months ago, a source told People,

That won't stop fans and people on social media from making assumptions and dissecting every single piece of information for a clue about her pregnancy. And with the news of her reported labor, what else is there to do if you don't have any concrete information? Go on social media and cut the anticipation with some hilarious tweets.

If Kylie Jenner is indeed pregnant and in labor, this won't be the only Kardashian-Jenner baby we get in 2018. Kim Kardashian has confirmed she's expecting her third child with Kanye West this year. Khloé Kardashian also confirmed her first pregnancy back in December with an emotional Instagram post.

Well, if we still have no answer on Kylie Jenner or her possible baby, at least we can focus on these two Kardashian pregnancies, and these hilarious tweets.

More like this
These Tweets About Regé-Jean Page Leaving 'Bridgerton' Are Royal Bummers
By Cianna Garrison
These Tweets About Jimmy Fallon's TikTok Dance Follow-Up Segment All Say It's Too Little, Too Late
By Brandy Robidoux
Travis Barker Tattooed Kourtney Kardashian's Name On His Chest
By Joyann Jeffrey
Stay up to date