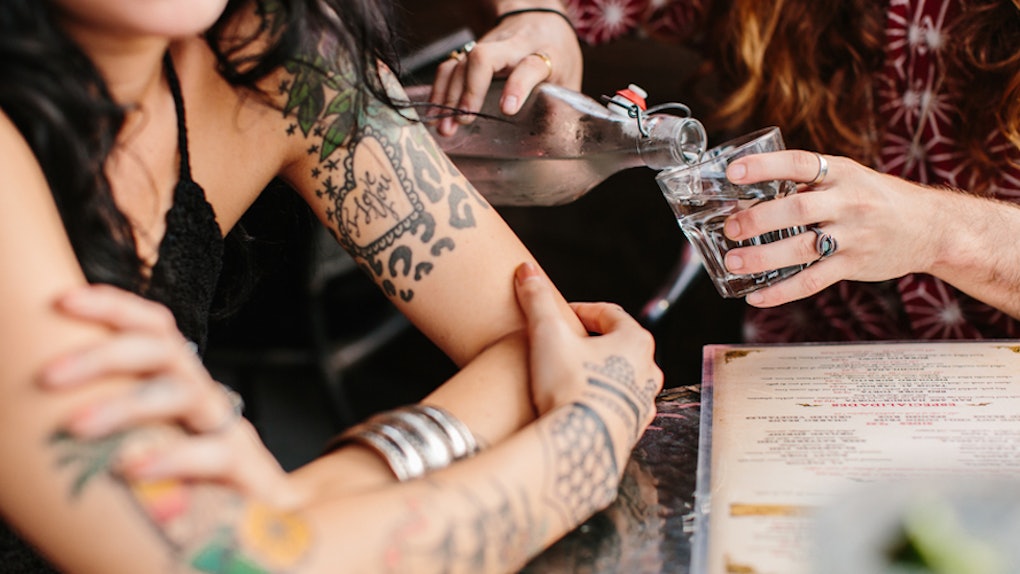 I’ve gone on a lot of first dates in my life, and I don’t think I’ve ever really had a bad one. A not-so-great one? Sure, but never one where I felt I totally wasted my time. That's not the case for the folks down below, who revealed their biggest first date deal-breakers on a recent Reddit thread full of horror stories.

First dates can be so tricky. Most of the time, you and your date are meeting for the very first time after either chatting on a dating app or being set up by a mutual friend. If you haven’t really spoken much, it can be super awkward, no doubt about it. But there’s a difference between a date being awkward and a date being bad. In my experience (which isn’t, like, a ton, but I like to think it’s enough), an awkward date can lack good conversation, resulting in weird bouts of silence and painfully non-discreet glances at your phones. Nothing bad happened, but you didn’t exactly vibe, and that’s OK. You’re not going to vibe with everyone.

A bad date is one where you have to text your friends a safe word so they can call you to fake an “OMG I have to go my friend is super sick/just went through a breakup/needs toilet paper” excuse. A bad date is one where all they can do is talk about themselves and all you want to do is crawl into a hole and never hear their voice again! And, worst-case scenario, a bad date is one where you feel incredibly uncomfortable because your date is pressuring you to do things you’re not into. Once you've been on enough of these, you tend to compile a list of the unacceptable behaviors that you, a strong, independent woman, do not need to tolerate! Because you should never have to deal with anything you don't want to.

The dates below probably helped the Redditors that experienced them compile their list of deal-breakers. Let's learn from them, shall we?

Things were fine until I noticed that the tops of her feet were tattooed with portraits of John Wayne Gacy and Charles Manson. Across her toes were the words "party dudes". When I asked her what was up with that, she said "I just think they were really intelligent, misunderstood guys."

Any signs of poor hygiene. I don't care how interesting you are or even how good you look, it cancels everything out immediately for me. I can't imagine touching a person like that or what their living environment must look like.

They Absolutely Shouldn't Pressure You To Do Anything

Had a date with a guy who owned the sports bar we were at. He repeatedly suggested we “go to his office” or try to go “someplace quieter”. Date only lasted a couple hours, and that was only because I got on the topic of dogs with one of his friends.

He arrived with a bottle of homemade massage oil he wanted to take back to my place to use because he still lived with his parents.

He parked his motorcycle in the handicapped spot and insisted on sitting next to a window so he could keep an eye on it.

He told me he hoped I would wear a low cut shirt to the date.

He said I needed to pay him back for dinner by buying him some beers.

He was still mad at his high school (he was in his 30’s) for expelling him because “they knew he was the only one smart enough to build a bomb, and he would if he wanted to”.

Asked that I rub calamine lotion on a rash she had behind her knees.

Didn't ever really expect that to be a thing a date would ask me to do. I left.

For me, it's pushing boundaries. If a guy keeps trying to do or pressure me to do something I've said I'm uncomfortable with, even if it's something that seems like "no big deal", I'm out. Apart from the fact that it's a clear sign of incompatibility, it also raises the question of whether I can trust that person to respect more serious boundaries.

Not just talking about an ex (because we’re adults and everyone has a past), but continuously calling exes crazy and blaming them for their relationships ending.

Blaming others in general. "The world is out to get me" is such a turn off.

Honestly, talking too much shit about others. A little is fine if you're telling a story. But too much and I assume you're a drama llama

Belittling other people. Taking shit about others is such a turn off and makes them look petty.

When They Blow Things Out Of Proportion

Making a really big deal about something really small. Not only for the reason of it showing their personality, but that it shows you two have inherently different priorities.

When You Both Live Very Different Lifestyles

Pulling out a meth or crack pipe

I had a guy offer me coke on the first date once. I mean, if I was into that it would have been a nice gesture I suppose but I'll pass.

They Probably Shouldn't Still Be Intimately Involved With Their Ex

I went on a date with this girl and I asked what she had done that day. She said hung out with her ex. Fine. Some people remain friends. I know I do. She said "don't worry, we didn't have sex, I only blew him." I excused myself to go to the bathroom, found our waiter and paid the bill. After finishing my drink, I bailed. Nope nope nope.

People Who Only Talk About Themselves

YES! When I was online dating this was a common problem for me. I would end up asking all the questions and these guys would talk about themselves non-stop, without asking about me. They always seemed to think we were connecting but it was so one sided. It might have been nervousness, idk. But it definitely made me feel like they only thought of themselves.

This was the first date, so I was put off quite a bit by the request. When I protested and assured her that my finances were sound, she went off on an epic tirade on how her last boyfriend--and most men--are leeches looking for women to take care of them.

She did meet me at my office. She saw my new car when I pulled up. I paid for the first round of drinks because the waitress was cashing out and wanted to clear our check.

I thought that was more than enough initially to show that hey, I'm a financially responsible adult.

I eventually showed her my credit score on my phone (it's sitting at 780-ish because I had just bought a car). She asked to see my phone to make sure it wasn't a screen shot of someone else's report.

I texted her the next day and told her that we weren't going to work.

1) Hinting at what my salary or financial status is, 2) Sizing me up and downright asking if I was/am a baby maker (I'm a guy).

Only you know what your deal breakers are — they definitely aren't confined to just these. If anything (and I mean anything!) on your date makes you feel uncomfortable, take note so that you know to avoid those things next time. Bad dates aren't fun, but at least they help us realize what we don't want in relationships, and that's just as valuable as realizing what we do want.