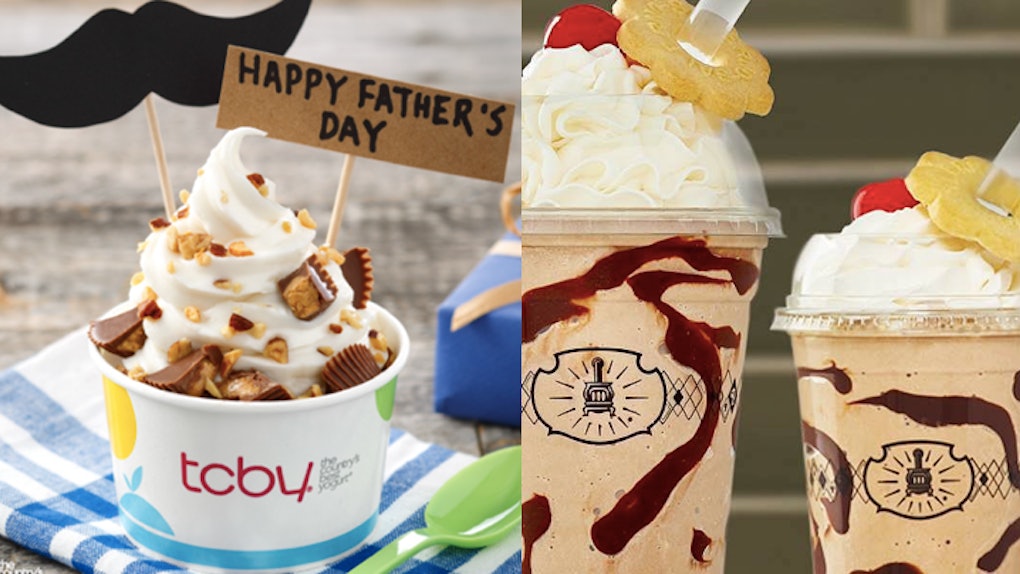 Father's Day is just around the corner, and if you're ready to celebrate your dad, grandfather, or a father figure in your life, there's no shortage of ways to do so. Whether you want to get him a special gift, take him out to dinner, or create something special for him, these Father's Day 2019 food deals will help you celebrate dad's special day in the most perfect way.

Father's Day takes place on June 16, 2019 in the United States, but the holiday dates back over a century ago. According to The History Channel, the first Father's Day can be traced to Spokane, Washington in 1910, where a woman name Sonora Smart Dodd, who was raised by a widower, set out to establish a holiday like Mother's Day – which had been around since the mid-1800s – for dads. Dodd was successful, and Washington State celebrated its first Father's Day on June 19, 1910. It wasn't until 1972, almost 60 years after Washington's first Father's Day celebration, that President Woodrow Wilson declared it a nationwide holiday.

So if you're willing to go the extra mile to show dad how much you love him, here are eight Father's Day deals that say, "Happy Father's Day, I love you," in style.

If your dad loves seafood, there's no more classic place for a variety of from-the-sea options than Red Lobster. Red Lobster's Father's Day deal will not only reward your dad with Red Lobster, but also get you some discounts, too. Here's how it works: Spend at least $75 on Red Lobster gift cards for dad (or whoever you want). After you do this, according to an email from the restaurant to Elite Daily, Red Lobster will gift you two bonus coupons good for either $10 off two adult entrées or one free appetizer for a future visit between July and September. This basically means you get your own gift when you get dad a gift — what's more exciting than that!

Nothing says "I love you" like warm, flavorful, all-American cookies and cookie cakes. For a cookie-themed Father's Day present, head to Mrs. Fields' online store and get 25% off select items through June 16, according to an email from Mrs. Fields. Choose from cookie boxes, cookie tins that say "Happy Father's Day," and Father's Day packs that feature almost 50 cookies.

Father's Day comes just a handful of days before summer, meaning temperatures will probably be relatively high in many places across the country. What's a better way to cool off with dad than some free froyo? TCBY is offering dads a free 6-ounce frozen yogurt in a cup or cone for one day on June 16, per the an email from the company, so head there to treat your dad.

If you're looking for some bagel-based breakfast or lunch, Bruegger’s Bagels is the place to be on Father's Day. Head here for breakfast with dad to buy one breakfast or lunch sandwich and get another one free, according to the chain's website. Bagels and savings? What could be better! Plus, if you sign up as a new member of Bruegger's Bagels Inner Circle, you can score a free bagel with cream cheese.

As part of Sonic's late-night snack campaign, Sonic Nights, people craving a sweet treat after 8 p.m. can snag tasty, ice-cream based goodness at the drive-in fast food chain. According the chain's announcement, the promotion is good for Sonic's Classic Shakes as well as Sonic's thick and creamy Hand-Mixed Master Shakes, including the Oreo Peanut Butter Shake, the Oreo Chocolate Shake, and the Strawberry Cheesecake Shake. You can also get 50% off Sonic's Real Ice Cream Cookie Sandwiches.

On Sunday, June 16, City Tap Kitchen and Craft is offering a complimentary pint of beer to all dads during brunch hours from 10 a.m. to 3 p.m., per an email from City Tap. So, if you live in one of City Tap's eight locations in places like Boston, Chicago, and Philadelphia, your dad is in for a boozy (and free!) Father's Day treat.

If dad's a big fan of wings, you might want to take him to Hooters this Father's Day to double up on the tasty snack. According to Chew Boom, if you order any 10 wings when dining in on June 16, you'll receive 10 free boneless wings on the house.

Potbelly Sandwich Shop is a great spot to stop for some lunch, and the chain's Father's Day 2019 will make the trip even sweeter. From June 10 through June 16, dads who visit Potbelly get a free milkshake (of any kind) with any purchase, according to an email from Potbelly.

Wherever you celebrate on June 16, these Father's Day deals will help you ball out for dad on a budget, so you can celebrate without breaking the bank.