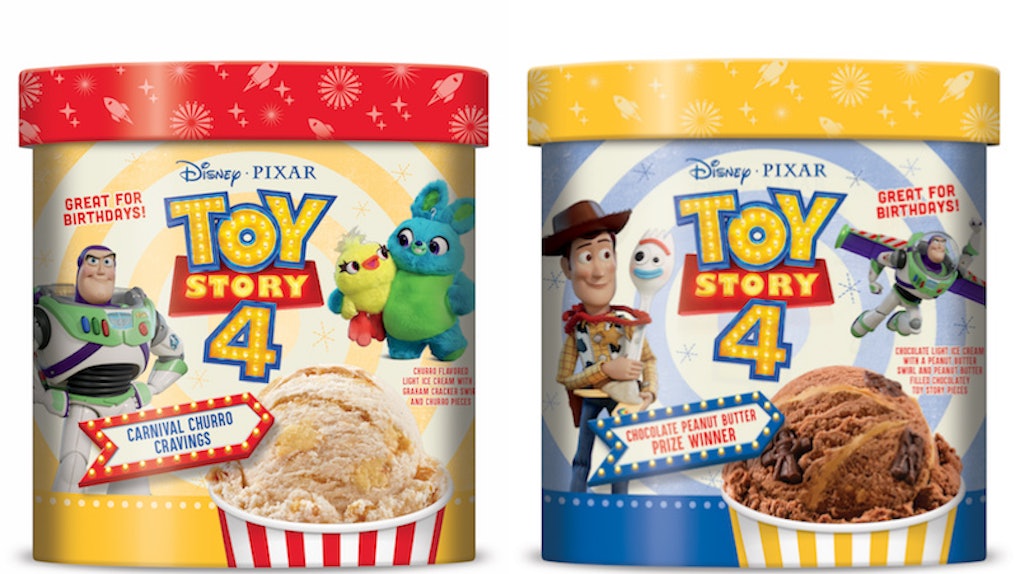 By now, you have most likely heard that Disney is releasing another Toy Story movie. It's been about nine whole years since the release of the third film (yes, almost an entire decade!), and to be completely honest, I am so. Dang. Excited. It looks like popular ice cream brand Edy's is on the same page, because they just released two new delectable-looking flavors in anticipation of the new movie. So if you haven't already inhaled each of these Edy's Toy Story 4 ice cream flavors, they'll totally make you want to reach for the sky.

Edy's is known for their delicious and festive pints of ice cream, and if you ask me, the brand has just completely outdone themselves. Not only are their latest Toy Story 4 cartons completely decked out in Woody and Buzz Lightyear cartoons, according to Delish, but the actual flavors look straight-up out of this world. Nestle, Edy's parent company, tells Elite Daily that there are two different varieties from which to choose: Carnival Churro Cravings and Chocolate Peanut Butter Prize Winner. If you've noticed different names for the flavors floating around the interwebs, you might have also seen the ice cream flavors referred to as Cinnamon Churro Carnival Combo and Chocolate Peanut Butter Midway Mash-Up. Seeing as though the ice cream brand is known as Edy's in some parts of the country and Dryer's in other parts if the U.S., that could be the reason for the slightly different monikers, but Nestle couldn't confirm the regional differences at the time of publication.

If the mere sound of any of those names, though, doesn't call for a super sweet night in, I seriously don't know what will. Alright, I want to be completely upfront with y'all — I have not yet spotted or tasted either of these flavors myself.

Instagram food account @threesnackateers spotted both of the varieties, Carnival Churro Cravings and Chocolate Peanut Butter Prize Winner, at Meijer in Algonquin, Illinois, a suburb outside of Chicago, as of Feb. 14.

When it comes to taste, Micky from The Three Snackateers tells Elite Daily via email that the Carnival Churro Cravings "has a definite churro vibe to it." The flavor is described on the carton as "a churro flavored light ice cream with a graham cracker swirl and churro pieces." After getting a taste, Micky reports, "The graham cracker swirl was an excellent choice to complement the cinnamon flavor of the ice cream," even comparing it to "cinnamon sugar graham crackers." As for the pieces of churro, they are "slightly crunchy and slightly chewy," but Micky thinks they could definitely be a little bit bigger.

Wow, they honestly look so good. This is making me way too excited right now.

It looks like another renowned Instagram foodie @CandyHunting was also fortunate enough to spot them in the flesh (er, carton), based on their latest IG post. This time, the treats had the alternate monikers.

Right now, it's a little bit unclear as to where you can actually find these tantalizing new flavors, but checking your local grocery store is a good bet, as Nestle tells Elite daily via email that the flavors are hitting stores this month, aka February 2019, and they'll be available for a limited time until September 2019. So, you've got a little bit of time to hopefully spot them in your local store.

If you're down to place an online order for them, both varieties appear to be available on Instacart as of publication. But other than that, their buying information is a little bit ambiguous. If you're located in the North East, however, both flavors were apparently seen by the Disney Food Blog at Giant Eagle, a Pennsylvania-based grocery store, which is definitely a good sign. If you're Brooklyn-based like I am, here's to hoping they'll be available in my neighborhood bodega. It's kind of unlikely, to be completely honest, but hey, a girl can dream, right?

I honestly don't know too much about the movie itself yet, but I did catch the trailer at the Super Bowl, and honestly, it looked great. Basically, it looks like Buzz is on sale at a carnival, accompanied by a bird and bunny. They think he's trying to steal their "Top Prize" spot, so they get in his face and show him who's boss. Meanwhile, Woody and Bo Peep appear to be perusing the carnival, with no knowledge of their space pal's sticky situation. Most likely, their mission will be to save Buzz. I can't wait.

I'm seriously anticipating Pixar's next Toy Story movie, so it goes without saying I'll definitely be trying Edy's latest movie-themed ice cream flavors. There's absolutely zero doubts in my mind I'll be smuggling both flavors into the theatre, so Disney, if you're reading this, please bring them both to the grocery freezers of New York City. To deliciousness, and beyond!