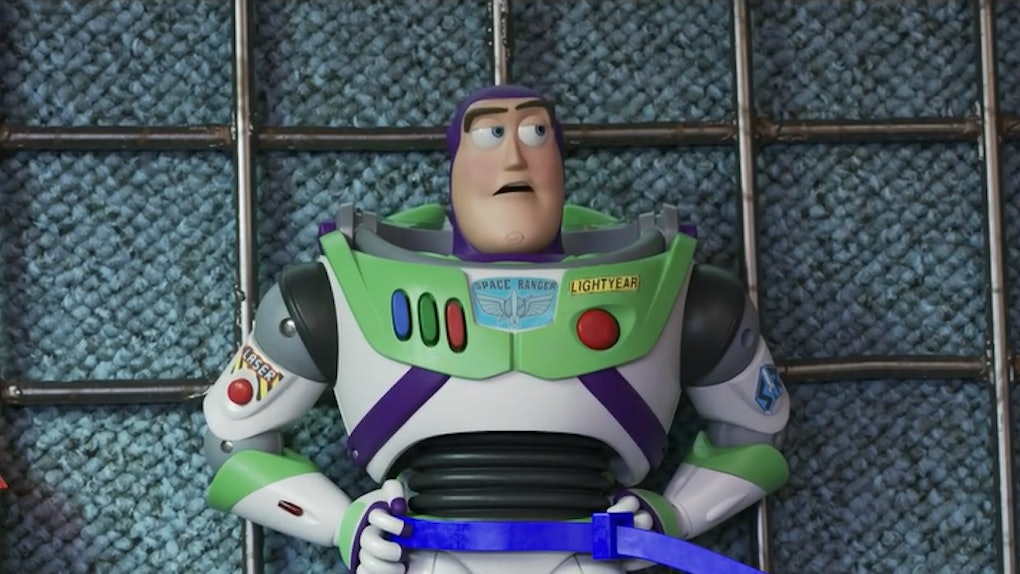 If you thought you left Toy Story in your childhood, think again. Everyone’s favorite animated film is coming back for a fourth installment in 2019 and a new trailer for said installment aired during the Super Bowl! The Toy Story 4 Super Bowl trailer boasted lots of fun, laughs, and action. So, get ready for some new adventures with Woody, Buzz, and the rest of the crew!

In the new trailer, Buzz is basically caught between a rock and a hard place, which is unfortunate! From the looks of things, Buzz is caught up at a carnival where he's for sale. Sadly for him, he's got a few neighbors — a bird and a bunny — who seem to abhor him. The bird and bunny are paranoid that Buzz is going to take their "Top Prize" spot, so they basically harass him to make sure he knows exactly who's boss. It's a sticky situation, for sure!

At the very beginning of the trailer, you can see Woody and Bo Peep checking out the carnival and talking about how amazing it is! Little do they know, their friend is trapped inside! If I had to guess, I'd say that the whole mission of the movie is to save Buzz from yet another dangerous situation. I wonder how they'll manage it! I have no doubt that Woody will figure something out, though, because he always knows just what to do!

In any case, you can check out the new trailer for Toy Story 4 down below:

This isn’t the first trailer Disney/Pixar has released for the new Toy Story movie. In fact, the company released a teaser trailer back in November 2018. And while that trailer didn’t show much, it did promise fans a glimpse at all their favorite characters: Woody, Buzz, Rex, Hamm, Mr. & Mrs. Potato Head, Slinky Dog, and the Aliens. So, the gang was all there!

The film is set to be released on June 21, so there are still several months left before fans get to see it, but that hasn’t put a damper on their excitement at all. As a matter of fact, the Super Bowl trailer seemed to boost everyone’s excitement for the film even more. People are already tweeting about how they can't wait for the film to be released.

And people aren't just tweeting about how excited they are for the movie — they're also making predictions about what they think will happen. For example, this person thinks Bo Peep will be the villain:

Hm, does Bo Peep have a darker side that no one knows about? Could be! If she did turn out to be a villain, it wouldn't be the first time she was cast in such a light. When ABC explored Bo Peep on Once Upon A Time, she was made into a minor villain that had a very short arc, so Toy Story 4 wouldn't be the first to do something like that!

I guess that all remains to be seen, doesn't it? Bring on June 21!