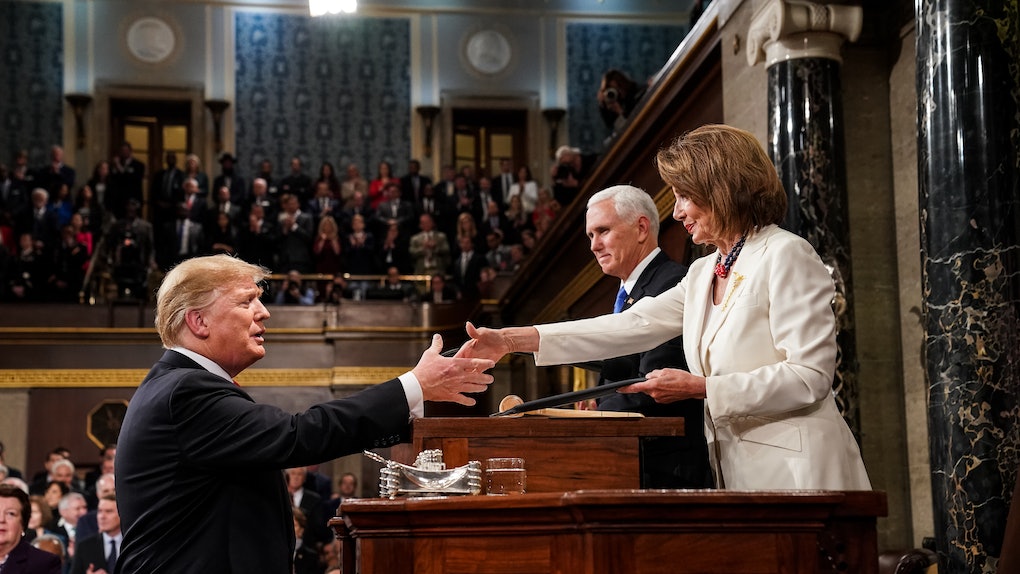 These Donald Trump Quotes About Nancy Pelosi Are Beyond Petty

The relationship between House Speaker Nancy Pelosi and President Donald Trump has been tumultuous to say the least. Over the past few months, these two political leaders engaged in heated debates, fought over budget spending, and took part in some subtle name-calling. However, it looks like the tension has no end in sight, and these Donald Trump quotes about Nancy Pelosi prove it.

Tensions between Trump and the House have increased over the recent months, and at the forefront of the battle is House Speaker Nancy Pelosi. These two leaders have battled it out over a variety of issues, but arguably the biggest one has been about Trump's proposed wall that would be built between the United States and Mexico. So far, the House has successfully denied any proposal Trump has made in regards to building the wall, but that's come with its consequences. On Dec. 22, 2018 the government shut down due to Congress and Trump not coming to an agreement on budget spending for the new year. This government shutdown lasted until Jan. 25, and it marked the longest government shutdown in United States history. Luckily, the country was able to avoid a second government shutdown by reaching an agreement on Feb. 14, and it did not include nearly six billion dollars for a border wall. (Trump separately declared a state of emergency on Feb. 15 over border security, and on March 11, he revealed in his 2020 budget proposal that he is asking for $8.6 billion to build the wall.)

This border wall debate has been a special point of contention between Trump and Pelosi, and Trump hasn't been easy in his commentary about the house speaker. Just take a look and see for yourself.

Trump Tried To Speak On Behalf Of Pelosi

On Dec. 11, 2018, Trump met with Pelosi, Vice President Mike Pence, and Senate Minority Leader Chuck Schumer in the White House Oval Office to talk about how they could avoid a possible government shutdown. During the meeting, Pence avoided confrontation by slipping back in his chair (which resulted in some hysterical memes), and Schumer attempted to chime in with some thoughts of his own. However, the real conversation was between Trump and Pelosi. While discussing disagreements between Trump and House Democrats, Trump claimed that everyone would have a "good discussion" in this meeting, but slid in a subtle remark about Pelosi as well.

"Nancy's in a situation where it's not easy for her to talk right now, and I understand that," Trump said during the meeting.

Follown Trump's comment, Pelosi quickly shut down Trump's remark with a clapback of her own. "Mr. President, please don't characterize the strength that I bring to this meeting," Pelosi responded. Elite Daily reached out to the White House and Speaker Pelosi for comment on the remark, but did not hear back.

While the meeting was intended to come to a tentative agreement on budget spending, it had zero positive results. Ultimately, the government shut down a few weeks later, and lasted well into the new year.

On Jan. 20, it seemed that Trump was getting frustrated with the lack of progress being made on his border wall, and decided to air his feelings on his favorite social platform, Twitter. That day, Trump posted a series of tweets to discuss Democrats refusing to fund the wall in exchange for the Trump administration giving an estimated 1 million immigrants a three-year protection from deportation. Near the end of the thread, Trump proceeded to call out Pelosi specifically, and it wasn't pretty. He wrote,

Nancy Pelosi has behaved so irrationally & has gone so far to the left that she has now officially become a Radical Democrat. She is so petrified of the “lefties” in her party that she has lost control... And by the way, clean up the streets in San Francisco, they are disgusting!

To little surprise, Pelosi decided to respond to Trump's claims that she "lost control" with a few statements of her own. On Jan. 20, Pelosi also took to Twitter to outline the impact of the government shutdown, and why it needed to end immediately. She wrote,

@realDonaldTrump, 800,000 Americans are going without pay. Re-open the government, let workers get their paychecks and then we can discuss how we can come together to protect the border. #EndTheShutdown

Trump Stated Pelosi Is "Bad For Our Country"

It's no secret that Trump isn't the biggest Pelosi fan. However, on Feb. 3, Trump wasn't shy about expressing his distaste for the house speaker while speaking to CBS News during an interview. On Feb. 3, just two days before the scheduled 2019 State of the Union address, Trump discussed Pelosi with CBS host Margaret Brennan, and had some.... interesting things to say.

"Well, I think that she was very rigid — which I would expect — but I think she's very bad for our country," Trump told Brennan.

Trump proceeded to talk about the need for border security, and that he believes Pelosi only fights him on the issue to prove a "political point." He said,

She knows that you need a barrier. She knows that we need border security. She wanted to win a political point. I happen to think it's very bad politics because basically, she wants open borders. She doesn't mind human trafficking or she wouldn't do this.

Trump Said That Pelosi Will Want A Wall Eventually

It doesn't appear that Trump will be budging on his fight to fund the border wall any time soon, and apparently, he believes that Pelosi will agree with him eventually. On Jan. 31, just a few days after the government reopened, Trump held a meeting with American manufacturers in the Oval Office to discuss border security. While speaking, Trump talked about the possibility of immigrants coming into the United States if a wall isn't built, which prompted him to make a very bold statement about Pelosi agreeing to a wall in the future. He said,

Despite Trump's confidence, Pelosi and other House Democrats haven't made any plans to accommodate his proposal. So, it looks like the president will just have to sit back and wait until then.

The month-long government shutdown continued into the new year, which led many people to wonder if the 2019 State of the Union would go according to plan. Initially, the nation-wide address was scheduled for Jan. 29, but due to the shutdown, Pelosi asked Trump to delay the State of the Union until an agreement was reached. Well, clearly that didn't sit well with Trump, because the president decided to retaliate by canceling Pelosi's overseas trip to Brussels, Egypt, and Afghanistan. On Thursday, Jan. 17, Trump wrote a letter to Pelosi revealing that her trip would be canceled, and threw in some petty remarks just for good measure.

A part of the letter read,

In light of the 800,000 great American workers not receiving pay, I am sure you would agree that postponing this public relations event is totally appropriate. I also feel that, during this period, it would be better if you were in Washington negotiating with me and joining the Strong Border Security movement to end the shutdown.

According to a Jan. 17 tweet from Pelosi's spokesperson Drew Hammill, the purpose of the trip was to meet with military leaders to "affirm the United States’ ironclad commitment to the NATO alliance," per Hammill's tweet. So, the fact that the trip was canceled might not be good for the U.S.

Elite Daily reached out to the White House and Pelosi's office for comment on whether canceling the trip was done out of retaliation, or had been rescheduled, but did not hear back in time for publication.

So there's that. I doubt that these two will be enjoying a friendly get-together anytime soon, but let's hope they can put their differences aside for the sake of the country.