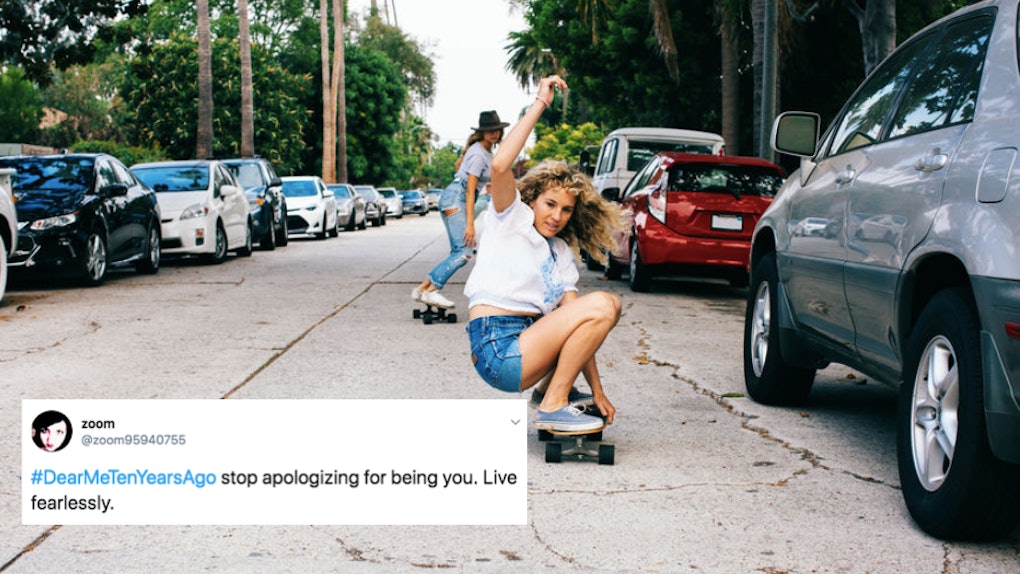 These #DearMeTenYearsAgo Tweets Will Show You The Importance Of Living & Learning

Twitter's usually a place where emotions run wild, but it looks like everyone is on a collective trip down memory lane. As of Friday, May 10, the viral #DearMeTenYearsAgo hashtag is in full swing — and Twitter users are sharing heartfelt messages that they'd give to their younger selves. Most people are sharing words of encouragement, while other folks are writing about past love lives and career choices. Regardless, all of these #DearMeTenYearsAgo tweets will give you the feels.

Seriously, if you plan on scrolling through the #DearMeTenYearsAgo Twitter feed, grab a box of tissues. Sure, some people are having fun with the hashtag by posting about lighthearted lessons, like @Target's post about "never saying no" to a Target run with your mom (so true). However, tons of people are getting real with tweets about their personal happiness, such as @beingkarmin's message about feeling joyful. In a tweet, she wrote, "Don't ever let anyone steal your joy. Remember this today, tomorrow and 10 years from now."

That's only one #DearMeTenYearsAgo tweet that'll tug at your heartstrings. But don't worry, there are hundreds where that one came from. Who knows, maybe all of the tweets will inspire you to write your own note to yourself.

First, "stop apologizing for being you."

As @SarahEMcBride says, "You can do this. Your family will still be proud of you. Your friends will still be your friends. Your community's heart will be big enough. You'll find fulfillment. Most of all, you'll find love. Don't be scared. Be you." Yup, I'm crying.

Some people are stressing the importance of self care. For instance, Twitter user @Shadow_Mind704 wrote, "[Y]ou can put yourself first, while learning to take care of others." It's true, y'all.

Other people are stressing the importance of self worth, stating how important it is to be proud of what makes you, well.. you.

Some people are reminiscing the tough times that they face throughout the past decade, reassuring their past selves that it'll get easier.

Others talked about their careers and how they should follow the paths that they've always dreamt about.

Most Twitter users shared messages of not giving up, though. Take @StaceandSpace for example, who wrote that "brighter days truly come your way."

In addition to the emotional tweets that people have been sharing, others have been writing lighthearted messages. For instance, @nolanzubin would've liked his younger self to take more pictures.

The National Air and Space Museum, on the other hand, reassured its past that "space only gets cooler." (Hello, black hole photo of 2019).

Another Twitter user highlighted one of the viral phenomenon when 53 million people liked an egg on Instagram "for now reason." TBH, if someone told me that 10 years ago, I would have probably had a hard time believing them.

Funny or not, it's obvious Twitter is feeling super nostalgic today. I don't know about you, but I definitely learned a thing or two about self worth and perseverance from simply scrolling through #DearMeTenYearsAgo tweets. Hopefully you did, too.