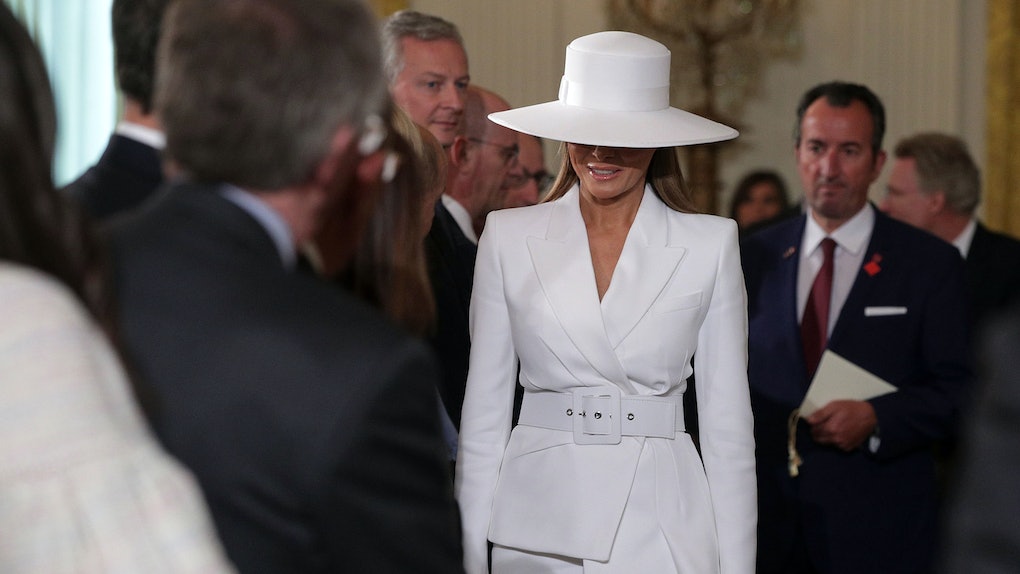 These Conspiracy Theories About Melania Trump's Absence Are So Absurd

#FreeMelania was trending on Wednesday morning, May 30, as speculation about first lady Melania Trump's "disappearance" from the public eye descended into ludicrousness. The world is kind of a mess right now, and I hesitate to say that I love conspiracy theories, because the fabric of reality and truth seems to be fraying. Honestly though, these conspiracy theories about Melania Trump's absence are so absurd that I can't help but laugh.

Some people are worried about whether she is just generally OK — weeks after the first lady reportedly underwent a kidney operation, CNN reported on Wednesday that Melania had gone 20 days without being seen in public. The last time she made a public appearance was on May 10, when she accompanied President Donald Trump to greet American prisoners released by North Korea at Joint Base Andrews. Other folks had some other ideas. Remember that White House sinkhole? Some people said that Melania dug her way back to New York City to get away from Donald. Others cheekily insist that Melania is cooperating with special counsel Robert Mueller.

"Mrs. Trump is doing great," Melania's spokeswoman, Stephanie Grisham, tells Elite Daily in an email. "She has participated in several internal meetings with her staff as she continues her work on behalf of children."

The White House has released almost no specific information, per Politico, about Melania's condition since May 14. She reportedly had a "benign" kidney operation.

"Sadly, we deal with conspiracy theories all the time — so this is nothing new, just more silly nonsense," Grisham told CNN.

Lucky for me, I love silly nonsense.

The coinciding of Melania's kidney surgery with this public "disappearance" is definitely fueling the ridiculousness on Twitter. If Melania were having some sort of medical issue, as some have suggested, officials could hypothetically disclose that information or explain the nature of her condition. But the White House isn't really doing much to de-mystify her absence, which is why some people think that whatever is or isn't happening with Melania cannot be made public. Melania's spokeswoman shrugged off the whole thing.

"I wouldn't characterize this as a long absence," Grisham added, per CNN. "She was hospitalized for almost a week and is now home and recovering. She has had several meetings internally with staff and will continue to do so this week."

The president himself also may have dumped fuel on the WHERE IS MELANIA? fire. Trump faced a question from a reporter on Friday, May 25, about the first lady's whereabouts, and he appeared to point to a window in the White House saying, "She's doing great. She's looking at us right now."

Politico reported that Melania has gone longer than 20 days in the past without making a public appearance, namely when she first stalled her move into the White House when Trump took office in 2017. Still, people are satirically theorizing that she's dead or whatever.

The same kind of rumor mill that is emerging in her absence, though, is reportedly what fuels Melania's desire to be withdrawn. Politico reported that the first lady does not like being in the public eye the way that President Trump does, citing unnamed White House sources. Melania reportedly sees these questions about her health as not driven by real concern, and are just the public's way of being nosy.

Conspiracy theories are funny when everyone enjoying them knows it's just silliness — but remember that they can be harmful and even become dangerous if they are believed. The "pizzagate" conspiracy theory came way too close to violence, for instance, when a man entered a Comet Ping Pong in 2016 seeking to investigate a baseless claim that it was operating a child sex ring by order of Hillary Clinton. With that in mind, remember that these jokes on Twitter about Melania's absence are nothing more than that, and if you're looking to make a joke yourself, just think about where it's coming from and don't root it in sexist stereotypes about appearances or comments in poor taste about marriage or domestic abuse. Not to mention, calling someone dead is not exactly a laughing matter... just ask Arkady Babchenko's wife.

It's unclear whether she has a personal policy of withdrawing from the spotlight, but she has definitely been known to keep a low profile. Either way, here's to hoping she's safe and healthy. In the meantime, feel free to distract yourself from the apocalypse with conspiracy theory nonsense — so long as you recognize that it is, in fact, nonsensical.