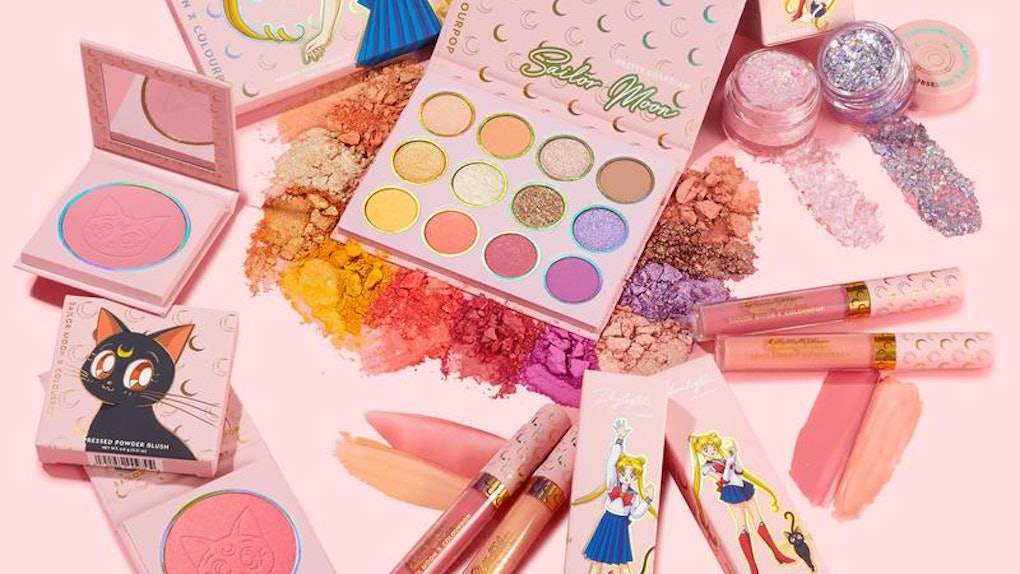 One of the most called-for ColourPop collabs came and pretty much immediately sold out. Met with resounding success, ColourPop x Sailor Moon was definitely a fan favorite as a concept, but how are the reviews? After dropping in late February 2020, the collection finally made its way into the YouTube beauty guru world. With Beautubers like Jeffree Star, Morgan Alison Stewart, Kathleen Lights, and Nicole Concilio all filming their thoughts, the reviews are officially in — and they’re saying go for it.

In his review of the collection, Star dives right in with the Pretty Guardian Eyeshadow Palette ($20, ColourPop), mixing the Justice yellow, the pink Tuxedo Rose, and the purple Miracle Romance. “There is a little bit of fallout … I don’t mind it. They’re blending well together. It’s a little patchy, but I’m not mad at it,” Star notes in the midst of his eyeshadow application. Across the board, YouTubers noticed a good amount of kickback in the eyeshadow palette. For a pastel palette, Star was very impressed by how pigmented the eyeshadow shades were once applied, saying, “Is this the best palette on the market, no. But it’s really cute. It worked. It was a little patchy, but at the end of the day, it blended well.”

Stewart was a little more confused with the different textures and shades in the palette, “As far as the pigmentation of these shadows go, again, kind of thrown off. Some of them seemed to be a little more transparent— more of a wash of color— while others seem to be highly pigmented.” Regardless, she had a lot of fun with the palette.

For the blushes, KathleenLights was blown away by the holographic packaging. When it comes to the From the Moon Pressed Powder Blush ($12, ColourPop) itself, she says, “It’s a really nice matte. It doesn’t look too flat at all.” However, she stayed away from the Cat’s Eye Pressed Powder Blush ($12, ColourPop) blush because she isn’t a fan of glitter in blushes. Stewart, however, was “pleasantly surprised” by the blushes, particularly with how pigmented they are, going so far as to say they were her favorite pieces in the line. Concilio, too, was blown away by the blush’s pigmentation, so overall, they appeared to be a success.

Probably the most confusing products seemed to be the Moonlight Legend Glitter Gel ($9, ColourPop) and the Moon Prism Power Glitter Gel ($9, ColourPop). Star and KathleenLights applied the body glitter to their faces for extra shine and were big fans. On the other hand, Stewart and Concilio both felt they weren’t the right market for the glitter, but Stewart went on to say, “This is not cosmetic grade glitter; this is craft grade glitter.” She also noted that all of her clothes ended up covered in glitter after.

With the Moonlight Lip Bundle ($15, ColourPop) and the Daylight Lip Bundle ($15, ColourPop), both Stewart and KathleenLights noted that the brand’s Blotted Lip product is not for a lot of lips. According to the Youtubers, if your lips are chapped or you pick at them, the Blotted Lips will show every crack. Of course, lip gloss can fix that. Concilio loves ColourPop’s Blotted Lip formula, however, and was a big fan of the colors, saying, “I love the Blotted Lips … They’re a very comfortable formula. They look matte without having that dry feeling.” Overall, the reviews are a little mixed.

If you really want the collection, the “experts” say go for it. With an eight out of 10 from Star, a thumbs up from KathleenLights, and Concilio saying, “I think this is one of the best collabs [ColourPop] has done,” ColourPop x Sailor Moon is well worth the hype. One thing is sure across the board: Sailor Moon fans will love it. Hopefully, ColourPop will restock the collection soon.

More like this
These Stick-On Face Jewels, Gems, & Nail Art Are Coming For Your Selfies
By Margaret Blatz
The Derol Lip Plumper On Amazon Is Taking Off On TikTok, But Is It Safe?
By Margaret Blatz
When Does Zara Beauty Launch? The Fashion Retailer's Beauty Brand Is Coming Soon
By Margaret Blatz
Stay up to date