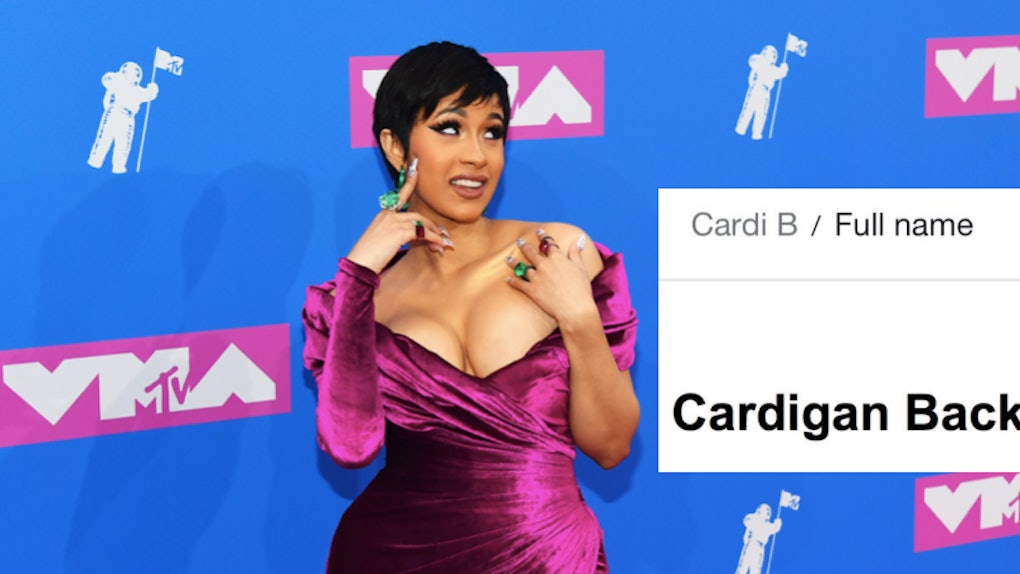 If you know literally anything about me, you're most likely already aware of the fact that I'm a huge sucker for dumb humor. Whether it's my thousandth time watching Step Brothers, or if I'm tearing through old SpongeBob reruns, I can pretty much guarantee that I'll laugh 'till I cry at even the most simple jokes. When it comes to memes, I find myself chuckling at most of what the internet has to offer. Anyway, my latest laughing episodes have been largely attributed to these celebrity "real" name memes, because they're some of the most ridiculous things I've yet to see. Seriously, you might actually end up LOL-ing harder than I am.

When I just need a laugh or two, I often head over to Twitter. I mean, think about it: When the Twitterverse gets bored, they get super goofy, and it's super entertaining. The "real" celeb name meme, for example, got started in January 2018 when someone posted the "real" name Google template to Reddit, per Know Your Meme. The meme then gained popularity in late August when Reddit user Mr_Malvac posted Lil Pump as "Liliam Pumpanikel." It basically imagines what a celeb's "full" name would be based on a nickname or stage name. But don't expect boring old revelations like Eminem is actually Marshall Mathers. These "real" names are much more creative than that.

It might not sound like much, but the results have been fantastic. Take Cardi B, for example. Twitter decided that maybe her full name could actually just be extended to Cardigan Backyardigan or Cardiovascular Bronchitis, which is why she ended up shortening it to Cardi B. Or Ice Cube's full name, for example, might actually be Icelandic Cubicle. I know, these are straight-up ridiculous, but they're leaving me in stitches. TBH, I can hardly breathe from laughing so hard right now.

Don't get me wrong — some of these "real" celeb names are actual words you can find in the dictionary. But the sad truth is that T. Pain isn't really called "Tylenol Painrelief." And Chris Brown is not aka "Christmas Brownie." If Nas was really "National Aeronautics And Space," that would be out of this world. (LOL) Take a look for yourself at some of the other funny AF examples below.

Other celebs' "real" names literally just consist of nonsensical words that kind of sound like extended versions of their names. Between "Lillian Pumpernickel" (Lil Pump) and "Boward Woward" (Bow Wow) I am truly rolling on the floor laughing. Seriously, this is too much for my weak old heart to handle.

Finally, some of Twitter has decided that these celebs' real names are just spoofs of their actual names. Like Flo-Rida might just actually be named Florida. Or, The Weekend's full name could be Saturday Sunday. I know, they're beyond goofy, but I love it. The creativity is evident, and I'm loving the commitment to these jokes.

Whether you're an easy laugh, or if it takes a lot to get you LOLing, you have to admit that the celeb "real" name memes are amazing. Of course, there are new meme popping up all the time, but the truly great ones will get a laugh out of you every time (looking at you, Biden and Obama memes). Seeing as though the celebrity "real" name meme gained popularity in late August 2018, per Know Your Meme, it's hard to know if this ridiculously funny meme will stick around. But with monikers like "Lilian Uziward Verticus", aka Lil Uzi Vert, and "Theodore Rockingchair," more commonly known as The Rock, I think there is good potential for this meme's staying power.

Whether they simply consist made up words or they play off the nature of the celeb's name, these are super innovative — and beyond funny. If you need me, I'll probably just look for more of these all day long.