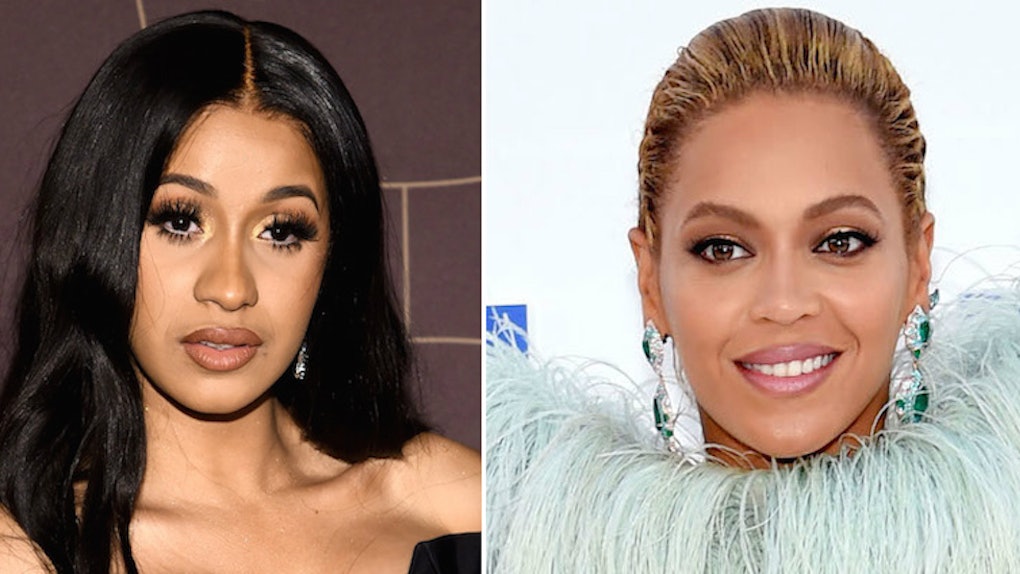 Cardi B wants everyone to know she's part of the Beyhive. Her debut album Invasion of Privacy dropped on Friday, April 6, and the rapper referenced Beyoncé not one, not two, but three times throughout the album. The Cardi B lyrics about Beyoncé are making it clear who she stans, and I'm praying to the gods above that this will help bring us a Cardi-Bey collab. (They honestly need to collab solely because of how well their names fit together.) The Beyoncé references in Invasion of Privacy can be found on "Thru Your Phone," "Money Bags," and "Best Life," but Cardi actually references Queen Bey twice on "Best Life," so I guess you could count that as a fourth reference.

On "Thru Your Phone," Cardi raps, "Beyoncé on my stereo 'Resentment' on repeat." Oof, if you know the song "Resentment," you know it's not a good look for a person if their partner thinks of them when listening to it. It's a song about that feeling resentment you feel when your partner cheats.

Fans are living for all of the Beyoncé references on Invasion of Privacy.

The line about Bey in "Money Bags" goes, "With them pretty ass twins, you look like Beyoncé." But she references Bey the most in "Best Life," so let's break down those lyrics.

Then Cardi B comes in:

I was in the field, man, I slaved for this (yeah) / Had to talk to God, dropped down, and prayed for this / To my surprise, He replied, said, 'You made for this' / I seen the car I wanted, then I went and paid for it, cash cash / Hit the Tay-K, I hit the race, hit the dash dash / That's when they came for me on Twitter with the backlash / 'Cardi B is so problematic' is the hashtag / I can't believe they wanna see me lose that bad / They talking junk and they stink, these hoes mad trash / I'm giggling, can't let the devil have the last laugh / Ain't no more beefing, I'm just keeping to myself / I'm my own competition, I'm competing with myself (brrrp).

The chorus comes in again, and then Chance The Rapper has his own verse that goes:

You don't like money, I can see it your eye / You don't like winning, I can see it in your tie / Better be careful with these women / When you tricking, send it fly / She count money in her sleep and she don't ever spend the night / But she trapping and she had to make it happen for her life / Don't be mad because she having sh*t you had to try whole life / We had baggage on our flight, we had badges on our asses / You got passes in your life, you had gadgets on your bike / God work magic, God work magic, God work magic in my life / And that guap look like Iyanla 'cause that bag just changed my life / Hey, y'all know good and damn well I don't want no champagne / But can we please get some more champagne? / Police, no Andre, G like 'Venchy / Reach like 'Bron James, pep talk from Yoncé / 'Member my hands had ash like Pompeii / Now they hold cash, won't peak like Dante.

The chorus repeats, and then Cardi B's last verse goes:

I said I never had a problem showing y'all the real me / Hair when it's f*cked up, crib when it's filthy / Way-before-the-deal me, strip-to-pay-the-bills me / 'Fore I fixed my teeth, man, those comments used to kill me / But never did I change, never been ashamed / Never did I switch, story stayed the same / I did this on my own, I made this a lane / Y'all gotta bare with me, I been through some things / Went from small-ass apartments to walking red carpets / Pissy elevators, now every dress is tailored / This some real-life fairy tale Binderella sh*t / I got further than them hoes said I will ever get / And that only goes to show that only God knows / I took pictures with Beyoncé, I met Mama Knowles / I'm the rose that came from the concrete in the Rolls / I'm like gold, I'm like goals, man, I chose and I'm floating, ayy.

Hey, Beyoncé, in case you weren't aware, Cardi B and Chance The Rapper are two of your biggest fans.