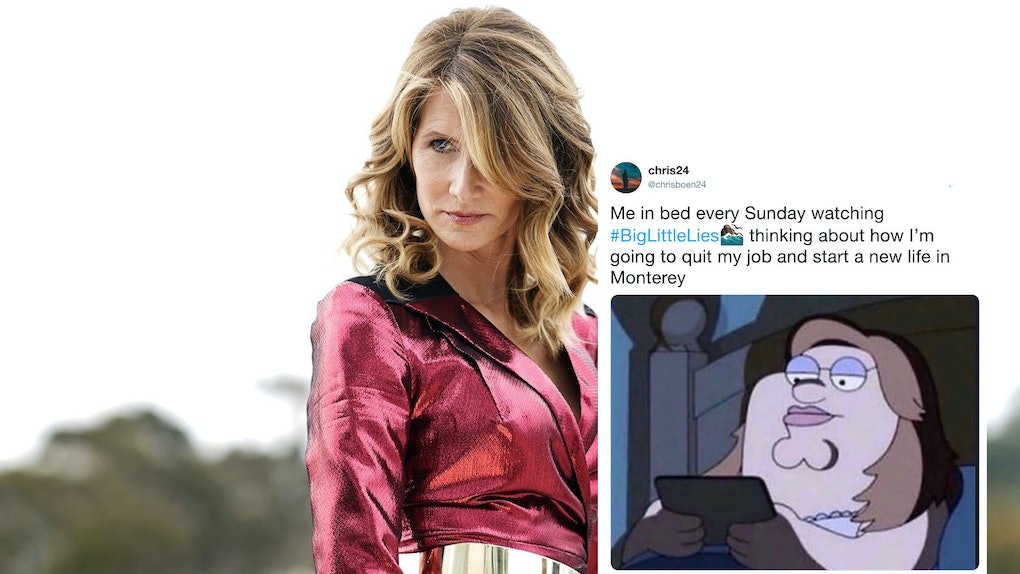 These 'Big Little Lies' Memes Will Make Your Day

There could not possibly be a formula better built for viral meme success than prestige actresses screaming catty insults at one another while wearing designer clothes. And that is why Big Little Lies takes over Twitter every single week, even more so in its newly begun second season. Although Season 2 has only aired two episodes so far, it has produced a ton of hilarious memes, reactions, and jokes that have spread across social media. These Big Little Lies memes prove that half the fun of watching the show is updating Twitter while it is on.

Spoiler alert: This post contains spoilers from the first two episodes of Big Little Lies Season 2. While the first season of Big Little Lies certainly had its theatrical moments, Season 2 has definitely ramped up the campy energy of its lead characters as they try to hide the secret of Perry Wright's murder. And of course, the biggest new addition to the show is the introduction of Meryl Streep as Perry's suspicious mother Mary Louise Wright. Streep's character has already majorly stirred things up in Monterey, and although the show still deals with heavy, dramatic plotlines, it also gives its stars a lot of moments to just totally let loose.

So far, the new season has already delivered its fair share of over-the-top moments that fans have quickly turned into viral memes and hilarious jokes. Some of the standout scenes include Meryl Streep's Mary Louise letting out a loud shriek in the middle of dinner, Reese Witherspoon's Madeline Mackenzie hurling insults at her new arch-nemesis Mary Louise, and most importantly, Laura Dern's Renata Klein just going off the walls whenever she gets the chance, especially sneering "I will not not be rich!" at her imprisoned husband.

Check out all of the best Big Little Lies Season 2 memes, jokes, and reactions from social media below:

As strange as it seems since only two episodes of the new season have aired, Big Little Lies Season 2 is actually nearing its end already. Like the first season, Season 2 only consists of seven episodes total, so the new run of episodes is already almost at its halfway point. Obviously, there is still plenty of drama still to come before the season ends, though. Fans are still waiting to see Meryl Streep unleash her dark side when Mary Louise Wright finally fully turns on the Monterey Five. And things are getting more complicated for the rest of the women as Madeline deals with the fallout of her husband discovering her affair, Renata faces bankruptcy, Jane and Celeste are coming to terms with raising half-siblings, and Bonnie is being crushed not only by guilt but also her newly arrived, overbearing mother.

We do not know yet if this will be the final season of Big Little Lies or if it could continue like it surprisingly did after Season 1. Big Little Lies airs Sunday nights at 9 p.m. ET on HBO.