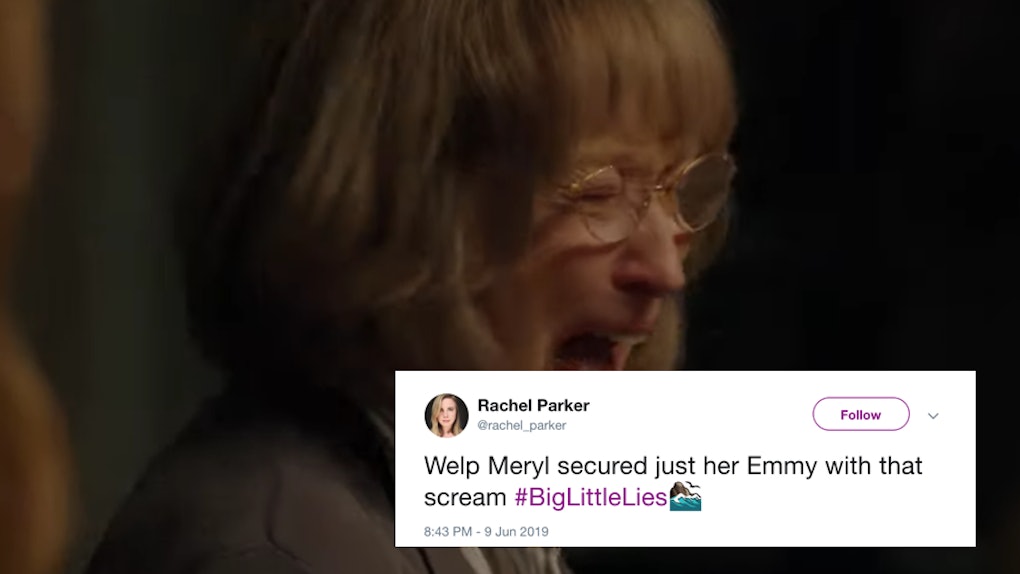 The Monterey Five have returned to screens everywhere, and a sixth fierce woman has joined them. Yes, I'm talking about the legendary women of Big Little Lies, who have just returned for Season 2 of the hit HBO series. The main cast who makes up the Monterey Five is already pretty star-studded, since it's made up of a who's who of Hollywood elite: Reese Whiterspoon, Nicole Kidman, Laura Dern, Shailiene Woodley, Zoë Kravitz. The only way the series' star wattage could grow this season was with the addition of one actor: Meryl Streep. And Streep did exactly that with her debut on the series in the Season 2 premiere. There were a whole lot of memorable moments for her character Mary Louise, but perhaps none caught audience's attention more than her dinner table grief-stricken scream. In fact, fans took to Twitter with these tweets about Meryl Streep's Big Little Lies scream that are sure to make you feel some kind of way.

Streep's Mary Louise has arrived in Monterey to help out her daughter-in-law Celeste (Kidman) and two grandsons after her son Perry (Alexander Skarsgård) died in an accident at the end of last season. In the premiere, she seems to suspect that the circumstances around her son's death might be more than meets the eye – and she happens to be right. Perry was abusive, and as he was attacking Celeste, the other members of the Monterey five rushed to her defense by pushing Perry down a flight of stairs. Now that Mary Louise is in town, she's feeling her grief deeply – so deeply that she feels the need to let out a blood curdling scream at the dinner table.

A lot of fans are already convinced that Streep has solidified her awards show campaign with this scene alone.

The scream doesn't come out of nowhere. After one of Mary Louise's grandsons is mean to the other, she excuses the behavior by saying that it's okay to be angry because they've lost Perry. She tells Celeste and the boys that earlier that day she met someone whose son is still alive and she felt jealous and upset. She says:

I’m so angry, angry, that their mediocre, second-rate, pudgy, balding, middle-management sons are still alive. So you know what I did? I did scream.

She tells everyone that story, and then gives them a taste of that scream.

While a lot of fans were disturbed by Mary Louise's scream, others just thought it was funny to hear an Oscar-winning actor scream her guts out.

This scream is just the beginning of Streep's powerhouse Big Little Lies performance. As Mary Louise digs into the mystery of her son's death, there's going to be a lot of tension with the other citizens of Monterey. Witherspoon told Glamour, "[Meryl's character] has a lot of conflict with pretty much everyone in the whole show. And she's fabulous."