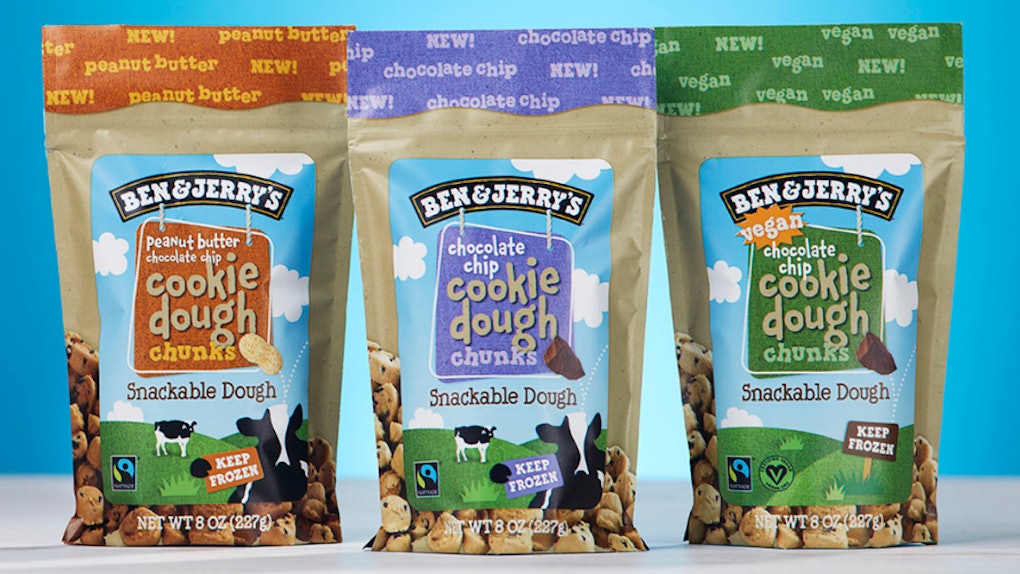 It seems that Ben & Jerry's is trying to break the internet today. The creamery just dropped some major new product news and I'm already drooling over it. These Ben & Jerry's frozen Vegan Cookie Dough Chunks are a total game changer for those of you who like to sneak a bite or two of raw cookie dough from time to time. I'm definitely guilty doing this. The new Vegan Cookie Dough Chunks are a nod to a classic cookie flavor that you probably grew up eating.

On Wednesday, April 3, Ben & Jerry's announced the release of Vegan Chocolate Chip Cookie Dough Chunks. The frozen snack, which has been certified by Vegan Action, can be found in the freezer section of select grocery retailers around the country starting in April, according to a press release issued by Ben & Jerry's.

“Fans have been asking for ‘just the chunks’ for a while now,” Innovation Manager Jody Eley said in a press release. “During a short market test in Vermont last summer, fans snatched up the dough in record time. Bags flew off the shelves in mere days and stores could not keep the delicious dough bites in stock! Now, Ben & Jerry’s is rollin’ out the dough to fans across the U.S."

Before you run out to grab a bag of these seriously delicious-sounding Cookie Dough Chunks, there are a few more bits of information you need to know. Each bag of Cookie Dough Chunks will retail for $4.99 each, according to Ben & Jerry's. Keep in mind, that's just the suggested retail price. So, if you live in a major city like New York or Chicago, you may pay a little more. However, $4.99 is pretty on par with the pricing of a pint of Ben & Jerry's ice cream at my local Target.

Cookie dough is one of my weaknesses. I'm guilty of taking a quick taste every time I whip up a batch of cookies. And, I'm equally as guilty when it comes to digging around for the cookie dough pieces from a pint of Ben & Jerry's ice cream.

The Centers for Disease Prevention and Control advise against eating actual raw cookie dough (yes, I know better). That's where Ben & Jerry's Cookie Dough Chunks come in. Each piece is safe to eat raw "because it contains pasteurized eggs and heat-treated flour," according to Ben & Jerry's. These new Cookie Dough Chunks are finally here to solve all of my problems.

Ben & Jerry's is catering to the masses with the announcement of Vegan Chocolate Chip Cookie Dough Chunks, as well as the release of two additional non-vegan Cookie Dough Chunk flavor. I think I'll give all three options a try to see which one is my favorite. Now, if you'll excuse me, I'm going to go track these down.